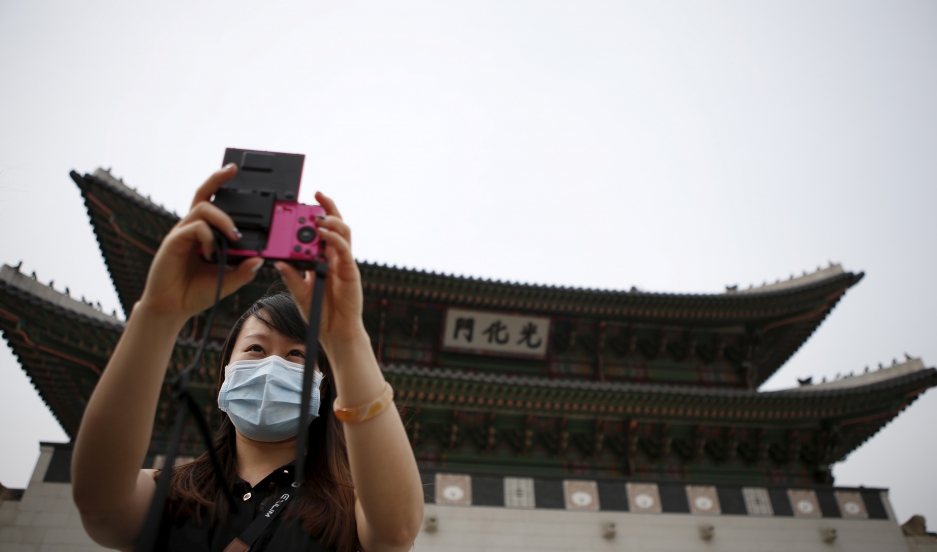 Chinese tourist wearing a mask to prevent contracting Middle East Respiratory Syndrome (MERS) takes a selfie in front of the main entrance of the Gyeongbok Palace in central Seoul, South Korea on June 4, 2015.

MERS is no joke. The virus has a mortality rate of 30 to 40 percent.

South Korean authorities say three people have died in less than a week after contracting the virus. The latest victim was an 82-year-old man who had been hospitalized with asthma and bacterial pneumonia. So far, there have been 36 confirmed cases of MERS infection in South Korea, which is the most outside of the Middle East. And health officials say there will be more.

“We are taking actions ... to prevent spread of the disease. But I don’t think citizens should be excessively fearful,” said Park Won-soon, the mayor of Seoul, according to Reuters.

But there is concern that South Korean authorities might be fueling public fears by taking unnecessary precautions. Hundreds of schools, kindergartens and universities closed their doors on Thursday in response to the MERS outbreak.

“[South Korean] health ministry officials say this might have been an overreaction,” says Jason Strother, a freelance journalist based Seoul. “The World Health Organization also says that this type of [precaution] is not going to do anything.”

MERS is not transmittable from person to person through the air, but only via bodily fluids. The virus is thought to have spread to South Korea last month, when a Korean businessman contracted the infection during a trip to the Middle East. He returned home, came down with symptoms and visited several different hospitals before being diagnosed with the MERS virus.

The next round of South Koreans who were infected with MERS all had close contact with the businessman, who has been referred to as “patient zero.” All three people who have died after contracting the virus were older hospital patients with pre-existing respiratory ailments.

More than 440 people have died after contracting MERS worldwide — most of them in the Middle East.

South Korean officials want to remain vigilant. They are asking more than 1,500 people to enter voluntary quarantine after attending a conference also attended by a doctor who was diagnosed with MERS. About 1,600 people are already in isolation at their homes or in hospitals and they are being observed for possible infection.

MERS is similar to SARS, but not as easily transmittable. A 2003 outbreak of SARS in China led to more than 8,000 cases of infection and killed 774 people.

If MERS does begin to spread in a big way, South Korea’s health system is well equipped to deal with such an outbreak. The country has past experience dealing with SARS and H1N1. It has many modern, high-tech hospitals, Strother says, that would be capable of reducing the mortality rate significantly.