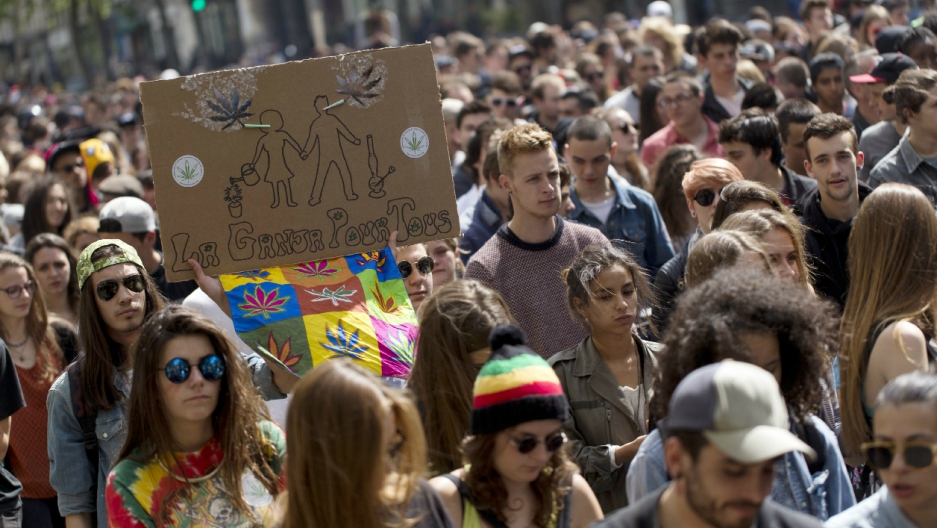 People demonstrate to call for the legalization of marijuana on May 9, 2015 in Paris.
Credit: KENZO TRIBOUILLARD
Share

He did not spell out why he expected no corresponding EU moves. But in a statement, his agency said a key finding in its latest annual report was a "marked rise in the potency and purity of Europe's most commonly used illicit drugs, fueling concerns for the health of users who, wittingly or unwittingly, may be consuming stronger products."

It also pointed out an increase in the numbers of cannabis-related health emergencies in Europe between 2008 and 2012.

More from GlobalPost: A guide to smoking weed around the world

Gotz told a briefing arranged to present the European Monitoring Centre for Drugs and Drug Addiction's report, "In Europe I do not know any government, or parliamentary majority backing a government, that is currently seriously discussing cannabis legalization or regulation in a different way.

"I don't see a discussion coming up of the level as it is in the Americas," he said in Lisbon, the agency's headquarters.

Portugal pioneered the decriminalization of all drug use in 2001 and some countries have followed suit, making possession of small quantities of drugs, especially marijuana, a misdemeanor rather than criminal offense.

Germany allows seriously ill patients to grow, buy and consume their own cannabis under a special license, and medical marijuana is legal in the Czech Republic, but otherwise cultivation and use remain illegal in the EU.

In the United States, 23 states and the District of Columbia allow medical marijuana, and voters in four states have gone further by approving the drug for recreational use by adults. But the drug remains illegal under federal law, which classifies pot as a dangerous narcotic with no current medical use.

The EU drug monitoring agency said technical innovation and market competition have led to an increase in the potency of cannabis, the purity of cocaine and the MDMA-content in ecstasy tablets.

It also flagged market changes such as detection of heroin processing laboratories in Europe and a greater diversification of trafficking routes and opioid products, which, combined with a substantial increase in opium production in Afghanistan, could reverse declines in heroin supply and stagnation of demand.