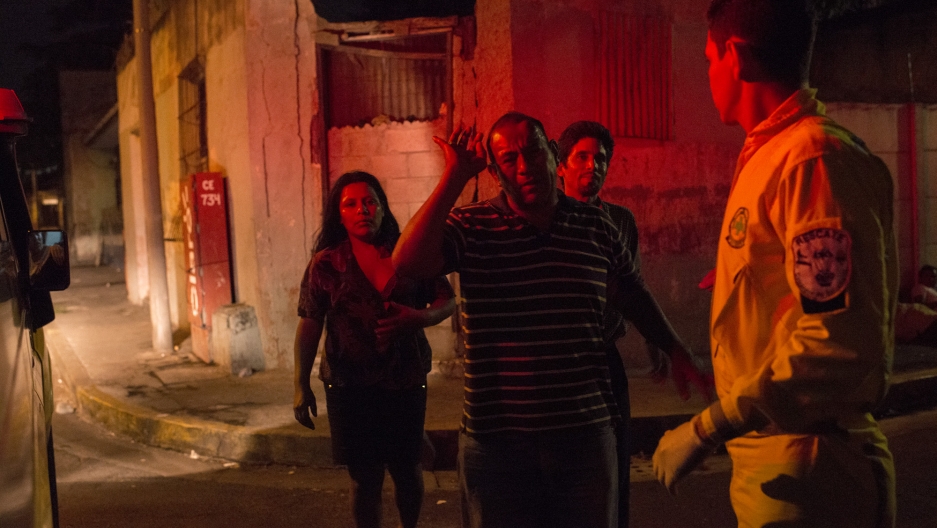 Volunteers with the Rescue Command treat a man who was robbed and attacked with a baseball in San Salvador.

It’s just before midnight on a Tuesday in San Salvador and 15-year-old Mauricio García is wearing a bright yellow uniform as he stands at a fenced parking lot, waiting for an alarm. If it goes off, it means he might end up at a crime scene in what is quickly becoming one the most dangerous cities in the hemisphere.

García may be a teenager on a school night, but he’s not at home. He prefers to spend his nights at the headquarters of Comandos de Salvamento, or The Rescue Command, a volunteer ambulance service that attracts a lot of young people from different parts of the city. 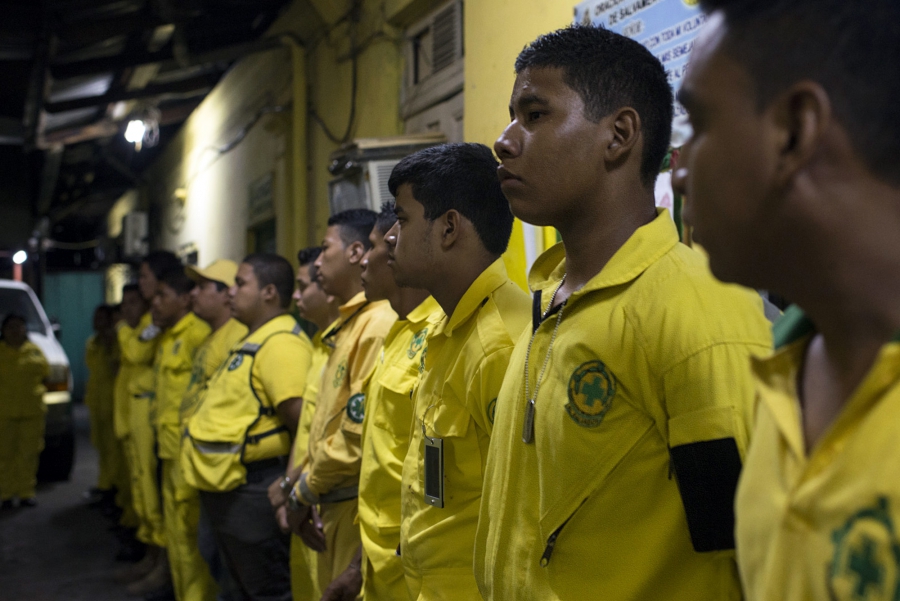 Mauricio Garcia, 15 years old, second from the right, has been working with the Comandos for the last 3 years. He sees the Comandos as an escape from violence in his neighborhood, which is controlled by one of the mayor gangs in the country.

“I have a big day tomorrow so I stayed here to get a bit of rest. At home I often can’t rest, for the fear that something can happen. I feel safer here,” García explains.

Gang violence is skyrocketing in El Salvador. May finished with more than 600 murders, more than any previous month since the country's civil war that ended in the early 1990s. Young people are often the victims, but the members of the The Rescue Command are on the front lines in a different way. The volunteers sit lined up in the half open courtyard, watching some old movies on a TV screen. Some others have already decided to rest in a small room packed with bunk beds. In the office just next to them, the ones in charge for tonight keep control of the radio and listen for alarms. The ambulances are ready, but so far it’s been a quiet night. 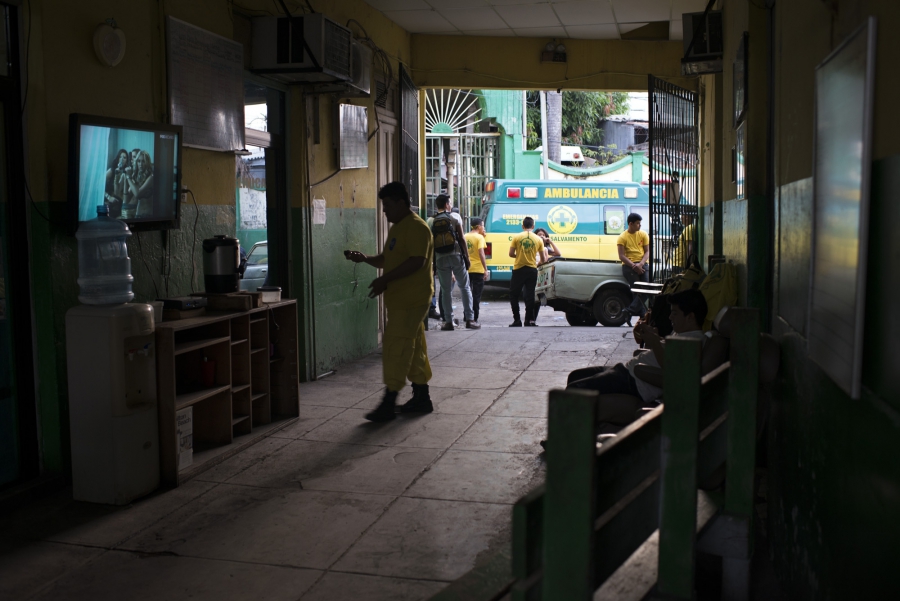 Comandos de Salvamento is an organization in El Salvador which is partly funded by the government and partly by donations from the public to operate as local ambulances.

García lives in the area of Soyapango in San Salvador, a neighborhood infamous for gang violence. A frontline between two of Central America’s largest gangs, Barrio 18 and the Mara Salvatrucha, is two blocks from his house. When he's at home, he doesn’t like to go outside.

“I had a friend that was killed in a shooting between rival gangs. He was going to an event with the church and had the bad luck to be in the wrong place at the wrong time. We grew up together, so it hurt me a lot,” García says.

He started to come here three years ago because his brother and uncle were already volunteering.

“They said it was good here, but I mostly came because of the situation with crime and violence. And I like to help people.”

“The violence during the war was in some way controlled, but now the insecurity is everywhere,” says Francisco Campo, vice president of The Rescue Command, who has been part of the organization since the early 80s. “We look at one of the world’s most violent countries and I cannot see the government doing anything important to achieve security for the Salvadoran people.” 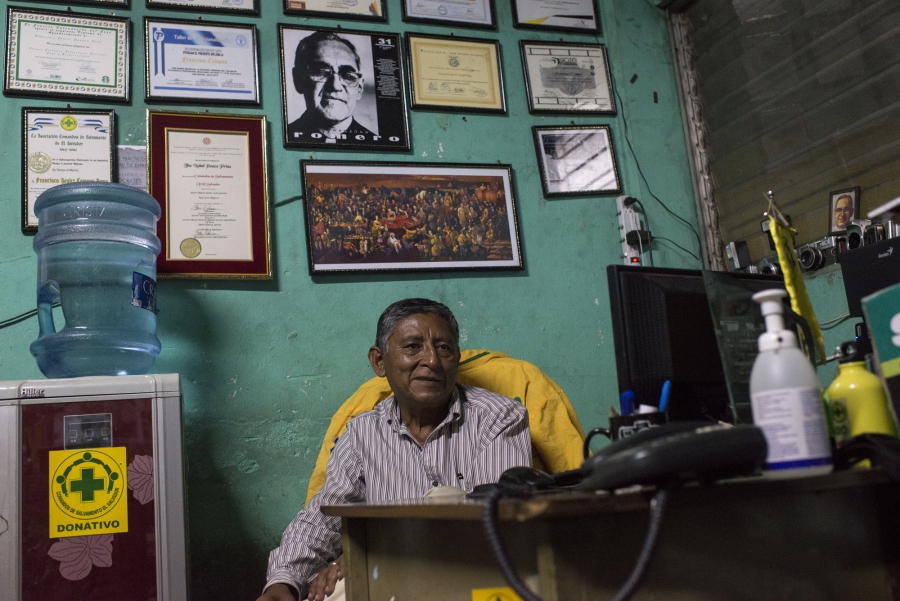 Francisco Campo, vice president Comandos de Salvamentos en El Salvador. He is a trained photojournalist working for mayor newspapers in El Salvador, and has been working with Comandos for many years.

The last months have been some of the bloodiest in El Salvador since the civil war. In March, an average of 16 people were killed every day, in May the number spiked to 21, according to authorities. With a population of just 6.1 million people, El Salvador is likely to pass Honduras this year as the world’s most violent country outside of a war zone.

“As long as the government doesn’t have a plan on how to handle the gangs, the situation will worsen. It’s hard to imagine peace in this country. In short term, I don’t think we have that possibility,” Campo says.

The Rescue Command has about 3,000 volunteers, about half of them in the capital area. People come and go according to the time they have. Many, like García, are students from neighborhoods that are known to be violent. 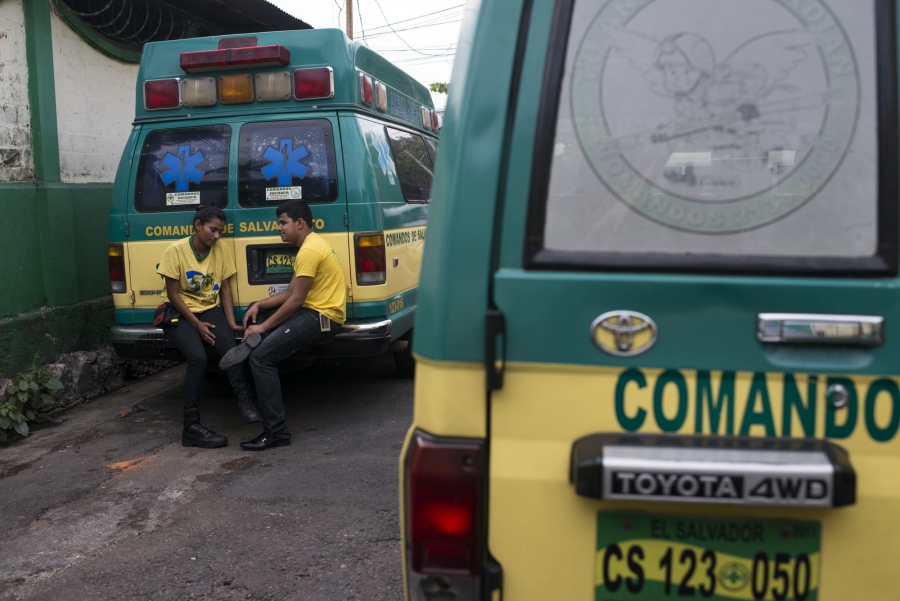 Two volunteers at the Comandos talk outside, in the parking lot, while waiting for an alarm to sound.

Roselva Melgar is 21 and spends two or three nights a week with the organization. She wants to be a doctor and sees the Rescue Command as a way to stay out of trouble.

“There are people who get involved in this institution not to have to deal with the wrong people or to get out of a situation that can lead to your death. It’s better to be here and serve the people,” she says. 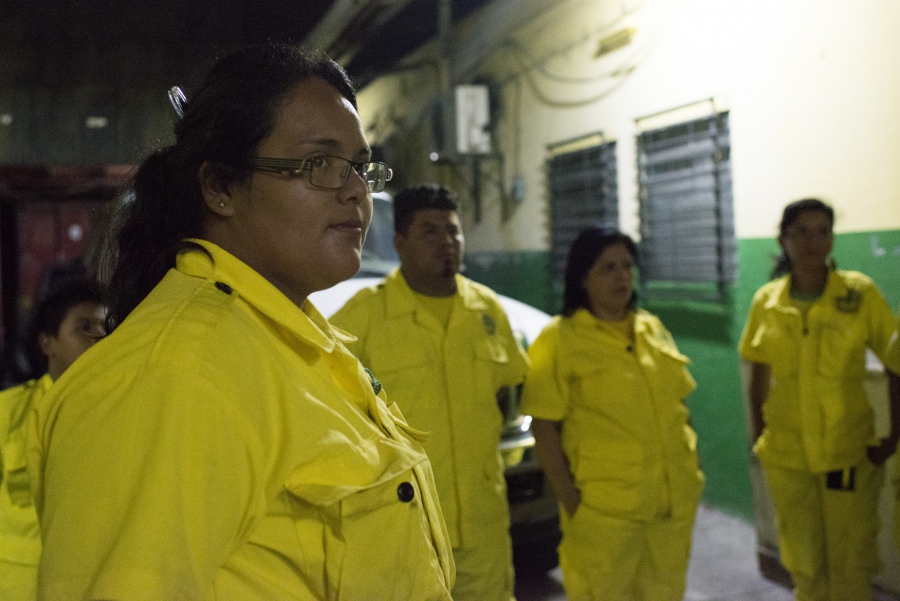 Roselva Melgar was promoted as head of a division, after the previous person in charge decided to quit because the job was too dangerous. Sometimes volunteers live in areas controlled by a gangs that is different from the one that is active near  the organization’s headquarters, which is enough reason for a person to be attacked or killed in El Salvador.

The young volunteers can be sent to any kind of emergency scene, including traffic accidents, shootings and murders. They have training in first aid and depending on what’s needed, bring the wounded to a local health center or a hospital. 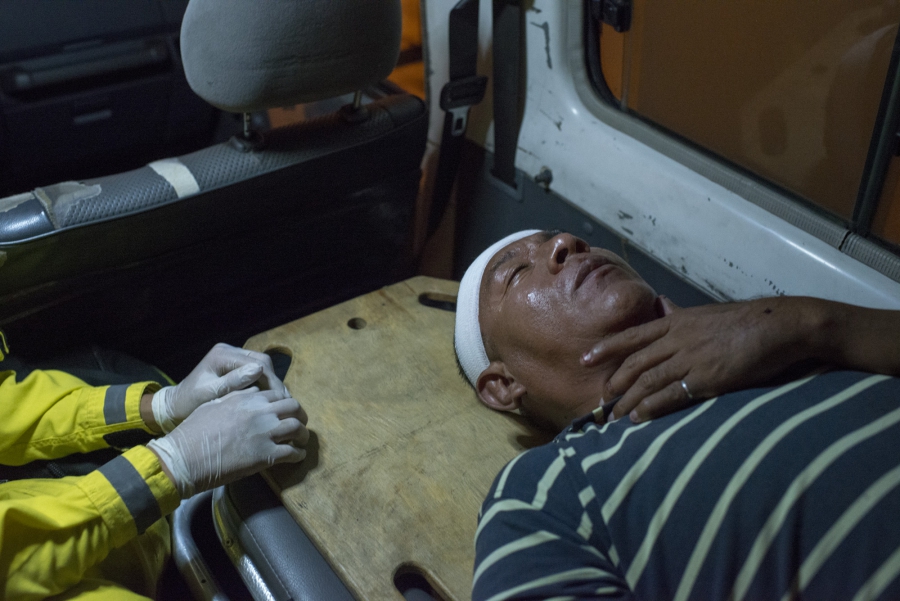 Edwin Alberto Orantes gives first aid to a victim who was robbed while he is being transported to a hospital.

Their bright yellow uniforms are well-known and they usually can do their work without being interrupted, even in gang controlled areas. But the uniform is no guarantee of safety.

“Sometimes they threaten us and as a woman they might look at you as someone less worthy or — I don’t know, but it’s certainly not a nice look,” says Melgar.

She has been robbed herself and says that as a young woman, you need to be even more careful. The amount of murders has spiked, but so have kidnappings and rape.

“Sometimes I’m afraid to go out, as you never know if you will come back and see your family again. The government really should do something,” she says. 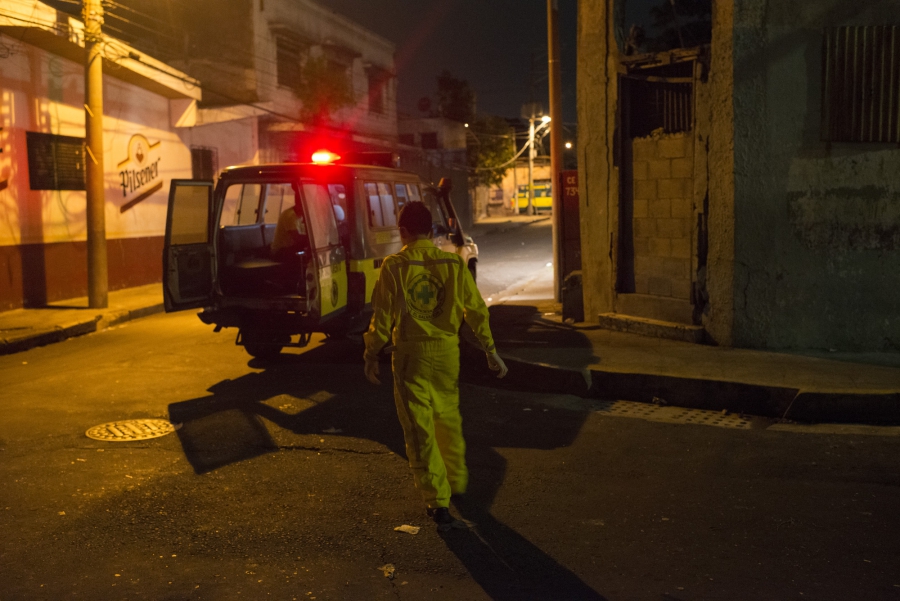 Gang members occasionally stop Commandos de Salvamento ambulances and will either question them and allow them to continue, or tell them to leave the area immediately, making them unable to rescue the person in need.