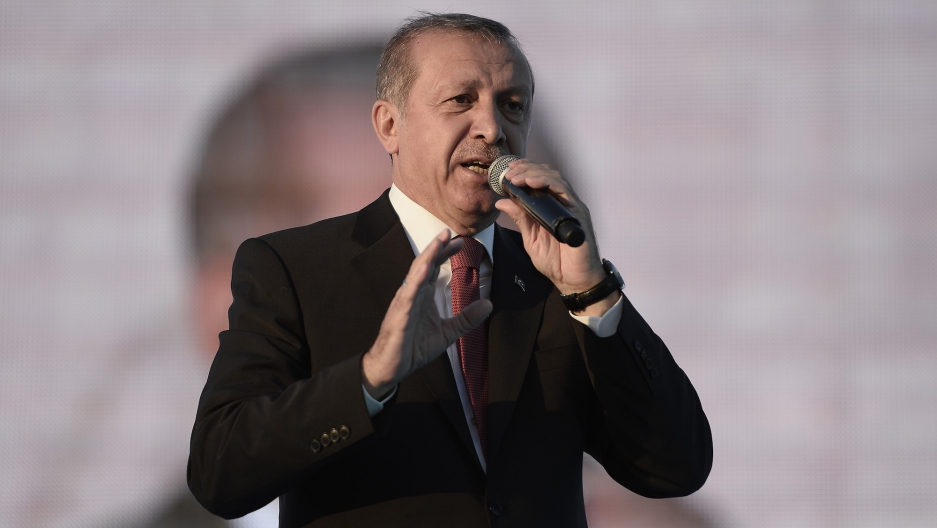 Turkey's President Tayyip Erdogan addresses his supporters during a ceremony to mark the 562nd anniversary of the conquest of the city by Ottoman Turks on May 30, 2015 in Istanbul, Turkey.
Credit: Gokhan Tan
Share

UPDATE: With most of the votes in Sunday's general election counted, the pro-Kurdish People's Democracy Party (HDP) has won nearly 13 percent of the national vote, meaning that it has passed the threshold to enter parliament for the first time.

ISTANBUL, Turkey — Turkish politics is at a crossroads. This Sunday, the country will vote in a general election that could have a dramatic impact on Turkey's future — and it could go either way.

President Recep Tayyip Erdogan, previously a three-term prime minister, is calling on voters to give his ruling Justice and Development Party (AKP) a parliamentary majority large enough to change the constitution and grant him sweeping powers. Opponents say such a move would threaten the country’s democracy, and accuse the president of attempting to become a new sultan.

But in an ironic twist of history, a party rooted in Turkey’s Kurdish movement — which has long been at odds with successive governments over the suppression of Kurdish rights — may thwart Erdogan’s dream of a super-presidency.

At a rally marking the conquest of Istanbul last weekend, Erdogan took to the stage as crowds shouted party slogans. Evoking the supposed glories of the past many say he is trying to recapture, Erdogan compared his party’s success to conqueror Fatih Sultan Mehmet’s victory.

Surrounded by Ottoman soldiers, he told his audience: “To reverse this nation’s ill fate for 12 years is a conquest… June 7th [election day], God willing, will be a conquest.”

Just three miles away, a very different gathering was taking place. Tens of thousands had gathered in support of the young pro-Kurdish People’s Democracy Party (HDP) that has vowed to quash Erdogan’s ambitions to gain greater powers.

The HDP could win as many as 50 seats. Their success would come at the expense of the AKP, which could lose its majority for the first time since rising to power in 2002.

Figen Yuksekdag, HDP co-chair, promised the party’s policies would be “the sultan’s nightmare”. Unlike other parties, the HDP has male and female co-leaders; half of its candidates are women.

The HDP has transformed itself from a solely Kurdish-focused party to include Turks as well as other minorities. Under its colorful banner, Armenians, Alevis, socialists, LGBT and environmental activists are running for parliament. Selahattin Demirtas, Yuksekdag’s charismatic male counterpart, has held speeches criticizing sexism and pledged to recognize the Armenian genocide — something the Turkish government vehemently opposes. People attend on May 30, 2015 an election rally of the leader of the pro-Kurdish Peoples' Democratic Party (HDP) in Istanbul ahead of the June 7 legislative election.

“It’s a party that represents all the colors,” said Nihat Bulut, a tour guide from the Kurdish-majority city of Diyarbakir, who attended Saturday’s HDP rally in Istanbul.

Waving a rainbow flag high over the crowded square, Salih Canova said: “It’s the first party to collaborate with the LGBT community. There is no other party rally where we’d feel comfortable flying our flag.” Around him, his fellow activists nodded in agreement.

Yet others criticize the party for its links with the Kurdistan Workers’ Party (PKK), the outlawed rebel group that has led a bloody fight for Kurdish autonomy in Turkey for more than three decades. The HDP is acting as a mediator between the PKK and the government in negotiations to end the conflict, in which tens of thousands have been killed.

In the run-up to the elections, dozens of HDP offices have been attacked. Earlier this month, bombs exploded at the party’s headquarters in Adana and Mersin, attacks that many believe were designed to provoke a violent response.

Worried about losing votes, Erdogan has repeatedly pointed out the PKK connection, referring to the HDP as “the political party which is run by the terrorist organization”.

“This election will not only determine who will govern the country, it will be a decision about what type of country our children and grandchildren live in.”

Although the president is required to be impartial according to Turkey’s constitution, Erdogan is at the forefront the AKP’s campaign: his face adorns party banners and he has been attending rallies and a multitude of opening ceremonies across the country.

Seeking to win over conservative Kurdish voters, he has used every opportunity to criticize the HDP. Yet in the Kurdish-majority southeast of the country, there are signs that the AKP is losing support.  A 20,000-strong Kurdish clan in the city of Batman recently made headlines when it publicly pledged to shift its support from the AKP to the HDP. They are not alone: five tribes in Sanliurfa province and 12,000 members of a clan in Adiyaman are among those who have defected to the HDP.

In the past, Erdogan could count on Kurdish support thanks to the AKP’s past efforts to strengthen Kurdish cultural rights, for instance lifting the ban on Kurdish-language media. He is also credited with pushing for peace talks with the PKK, helping him score comfortable electoral majorities in Kurdish strongholds like Mardin, Van and Bingol.

Hisyar Oszoy, a HDP candidate in Bingol, said Kurdish AKP voters had become disillusioned because of the stalled peace process and the government’s passive stance during the attack on Kobani last autumn.

“Mr Erdogan’s hostility to Kobani in particular has created a lot of disappointment,” Oszoy told GlobalPost. “I think he will have a big surprise in the Kurdish region.” Polls show the HDP on a knife’s edge. To enter parliament, they will have to pass the 10 percent barrier, one of the world’s highest electoral thresholds. Current opinion polls vary, putting the party between 8.5 and 11.5 percent. The AKP is scoring between 40 and 45 percent, a fall from the 49 percent it gained in 2011.

To alter the constitution, the AKP needs to win 367 of the 550 seats in the Turkish parliament. Failing that, 330 seats are enough to take the proposed changes to a nationwide referendum.

Turkey’s electoral system dictates that if a party fails to win 10 percent, its votes will be redistributed among the parties that enter parliament. In the HDP’s case, this would play out to the AKP’s benefit — and to the detriment of Kurdish political representation.

Kurds make up an estimated 20 percent of Turkey’s population. Should the HDP fall below the threshold, the Kurdish movement would be left without a parliamentary voice, leading observers to worry about the consequences for the already-shaky peace process.

At a recent rally in Izmir, Demirtas — the HDP’s co-chair — stressed that the election outcome would have long-lasting consequences.

“This election will not only determine who will govern the country, it will be a decision about what type of country our children and grandchildren live in,” he said.

The party’s candidates have vowed a campaign of civil disobedience if the HDP fails to enter parliament.

“If we’re below the line, we will go out on the streets and demand another election,” said Halime Yavuz, a HDP candidate in Istanbul. “Our struggle will continue."