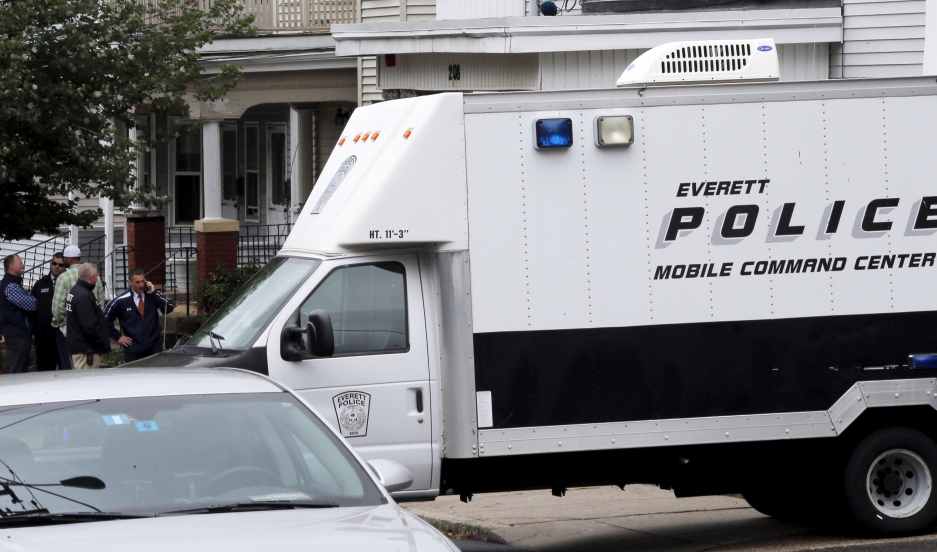 Law enforcement officials gathered on a residential street in Everett, Massachusetts on June 2, 2015.

There's still a lot we don't know about Ussama Rahim.

He was the 26-year-old man shot and killed by police in Boston yesterday.

Rahim had been under 24-hour surveillance by a Joint Terrorism Task Force — something that is exceedingly rare, said Juliette Kayyem, a former senior Department of Homeland Security official. He'd apparently been spreading pro-ISIS messages online. And he may have been hatching a plan to behead a police officer.

What isn't clear is why police decided to approach him in a public parking lot. And whether his alleged online activities made him a radicalized follower of ISIS.

"Something got triggered yesterday that caused the FBI and the Boston Police to approach him without a warrant and with no expectation there would be an arrest," says WGBH's Kayyem. "To approach someone in a parking lot of a CVS is very rare. In most instances you approach them at their home or at their office where they might be a little bit more comfortable. You don't want it to be antagonistic."

Task force officials say Rahim moved toward their men with a knife. After backing up, the officers shot Rahim three times. Rahim had been on the terrorism watch list. Kayyem says the list is an over-inclusive list. "It's going to be based on investigations that are ongoing or others that comes to the FBI or Boston Police Department through neighbors or friends," she says. "So these lists are bigger than the threat."

The Boston Marathon bombing trial gave the community a chance to see how young men become violent. But there's a lot about this subject that the trial did not explain. Kayyem thinks we're always learning about what makes people turn to violence.

"The nature of radicalization is something that is so difficult for a lot of people to conceptualize. We want there to be a blinking light saying, 'This is the guy! This is the guy!' But it just doesn't work this way."