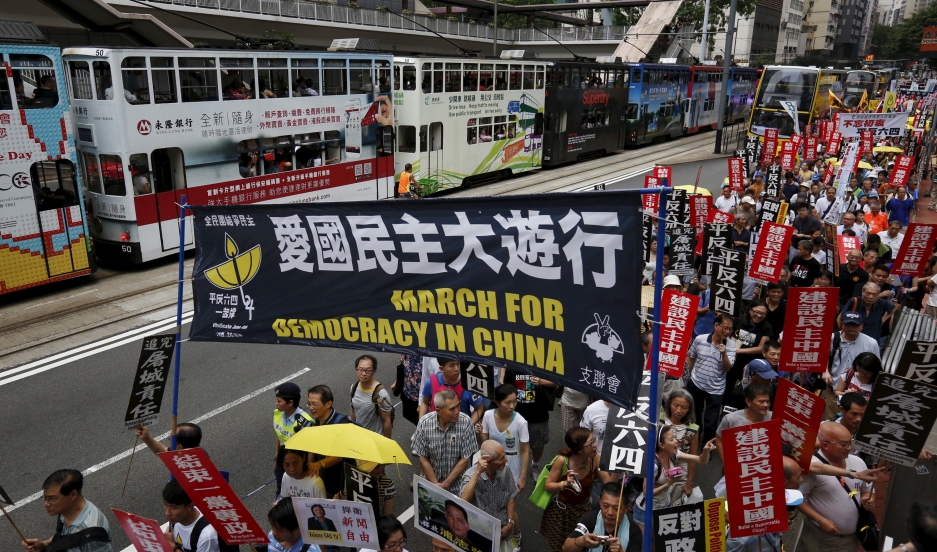 In Hong Kong, pro-democracy protesters take to the streets every year to mark the anniversary of the 1989 Tiananmen crackdown. This type of protest would never be allowed in mainland China.

First, China killed hundreds of their children in the Tiananmen Massacre. Now, 26 years later, Beijing is going after the now-elderly mothers.

Despite house arrests and intimidation, the Tiananmen Mothers are fighting massive official efforts to make China's people forget Beijing's violent quashing of student-led protests in Tiananmen Square and elsewhere that began on June 4, 1989. To this day, no one knows how many hundreds died after the Chinese government ordered troops of the People's Liberation Army to open fire on the people in the streets of the capital. The Tiananmen Square crackdown so taboo in China that officials have rounded up activists and, today, banned the relevant anniversary digits of 64 (June 4) and 89, even from financial transactions.

For, Zhang Xianling, 77, whose son was killed in the Tiananmen Massacre, the anniversary brings with it constant surveillance.

“I have been tightly monitored since the middle of last month,” Mrs. Zhang told The Australian by phone. “There are about seven people outside of my apartment. There are two out of the elevator, two at the entrance to the unit and two or three people are the entrance of my compound.

“I can’t go out without my companion [police officer.] Every time someone gets close to my door they stop them to ask if they are a journalist. They are quite polite but I call this ‘violating human rights with a smile.’"

Since 1995, the Tiananmen Mothers have been asking the government to acknowledge the events surrounding the crackdown. And this week, the group published an open letter through the New York-based organization Human Rights in China, demanding accountability for the harm done to their children and others. China's central government has gone to great lengths to bury the memory of what happened and, for much of the Chinese public, the truth remains shrouded in mystery.

"This is a disgrace for the whole Chinese people, and a disgrace for all of civilized humanity!," reads the letter from the Tiananmen Mothers. It went on to include a quote from Chinese Premier Li Keqiang, who said earlier this year, that “the leaders of a state not only inherit their predecessors’ successes, but should also bear historical responsibility for their predecessors’ crimes.”

Li was speaking about Japanese aggression against China during World War II. But the Tiananmen Mothers called on Chinese leaders to take the same approach with regard to the events of June 4, 1989.

"We have to unequivocally tell our leaders today that, relying on coerced selective forgetting can only succeed temporarily, and people’s silence cannot sustain over the long term. Debts must always be paid, and can neither be evaded nor reneged on," the letter reads.

Louisa Lim, a veteran China correspondent, has explored this in her book, "The People's Republic of Amnesia: Tiananmen Revisited." Shining a light on the events of 1989, she explores their profound impact on the country and the government's attempt to expunge them from the people's consciousness.

"I think they've been extremely successful," says Lim. "I was struck by the fact that there's an entire generation out there who really knows very little."

Lim met some of the Tiananmen Mothers while working on her book. "[They] really understand the role they play in modern China," she says. She describes the hardships faced by the activists over the past year: "Many of them were put under watch, they were summoned by public security officials for talks from morning until night, their homes were searched." Still, the women chose to publish this new letter. "The fact that they continue despite all of this repression really gives them a great deal of moral standing."

The current Chinese government is well known for taking a hard line on those who would dare to criticize its practices publicly. At times, that includes foreign reporters.

When Lim started to think seriously about writing a book about the Tiananmen crackdown, she was still living in Beijing with her family at the time. Was she willing to take the risk of raising the ire of the Chinese government and being put on a blacklist. "China was at the heart of my professional life," Lim writes in a piece for Foreign Policy about how Beijing censors any and all inquiry aimed at the so-called "June 4th incident."

In the end, Lim writes that her path became increasingly clear. "[T]he reality that Beijing’s Tiananmen omertà is now spreading beyond Chinese borders should concern us all. Those of us who enjoy the right of free speech should use it to raise our voices against the crime of silence."

"The authorities watch any foreign journalist based in China very closely," Lim tells PRI's The World. "I have no plans to go back to China in the near future, so I'm not sure whether there will be consequences for me."