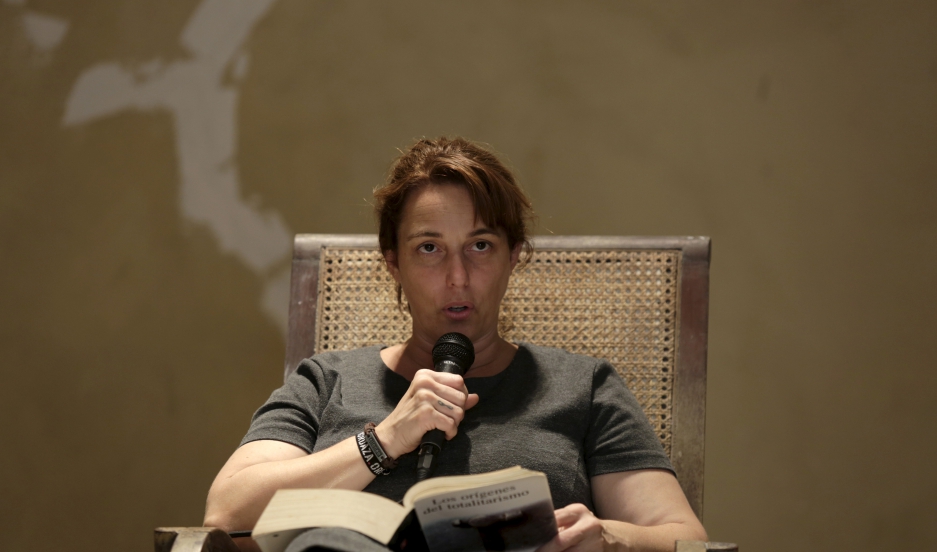 Not all of Cuban artists are basking in the glow of the 12th Havana Biennial, a month-long international arts extravaganza boasting massive outdoor scultptures, installations and even an ice rink right on Havana's oceanfront Malecon.

The most prominent voice barred from the festivities is Cuban-born Tania Bruguera, who used to split her time between New York and Havana.

On Saturday, Bruguera tried to attend an exhibition opening at the National Museum of Fine Arts. But Cuban officials wouldn't let her in.

"They're so desperate and so afraid, they lost the symbolic implication of their action," she says.

Bruguera has been a thorn in the side of Cuban officials since last December, when she was arrested for trying to stage a pro-democracy open-mic performance in Havana's Revolution Square. After that incident, authorities confiscated her passport on charges of disturbing the public order; she hasn't been allowed to leave Havana since.

Bruguera says when she was detained on Sunday, she was "taken for a little ride" by authorities, who cautioned her not to try to instigate demonstrations or marches. Why Cuban authorities interpreted a book reading as a rally remains unclear to Bruguera.

"They're extremely afraid of people taking to the streets," she says. "Anybody who is trying something like that will be completely silenced as a lesson to the rest of the people. So I feel right now that's what they want with me, to give a lesson."

Bruguera worries that if her passport is returned, and she leaves Cuba, she might not be allowed to return.

"They tried twice to give it to me in exchange for not coming back ever to the country, which I didn't accept," she says. "It's a very smart strategy, so that way they can control what I do."

The stakes are high for Cuban artists who are willing to criticize their government, according to Bruguera.

"There are a lot of negotiations that are happening behind the curtains to keep artists quiet," she notes. "The illusion ... was that we were going to be free to express what we think without being retaliated by the government."