Tito successfully flirted with the capitalist West and the communist Eastern bloc. He was the only communist leader who dared challenge Russia's Stalin. He accepted US aid, while refusing to bow to Western pressure.

This clever politicking earned his country, the Socialist Federal Republic of Yugoslavia, a prominent place on the world stage. At home, Tito’s signature brand of liberal socialism meant his subjects enjoyed vast state services — including free health care and education — but remained in the Iron Curtain.

But with Tito’s death, Yugoslavia began its decline and, by the 1990s, the country no longer existed. The newly independent states were soon at war.

Thirty-five years after his death, and the eventual bloody disintegration of his county, many remember the benevolent dictator affectionately, and in the states of the former Yugoslavia, Yugonostalgia, is on the rise.

Each May 25, thousands of people gather at his grave in Belgrade. Outside, elderly Serbians sing communist songs and odes to Tito. Inside, a procession of mourners bow in front of his grave and leave flowers.

Tito led one of the most effective anti-fascist forces in Europe, fighting the Nazis as they occupied Yugoslavia. Eighty-eight-year-old Antonije Nedelkovski fought with Tito’s Partisan forces. Decorated with war medals from his time in Tito’s army, he tears up as he recalls the day Tito died. 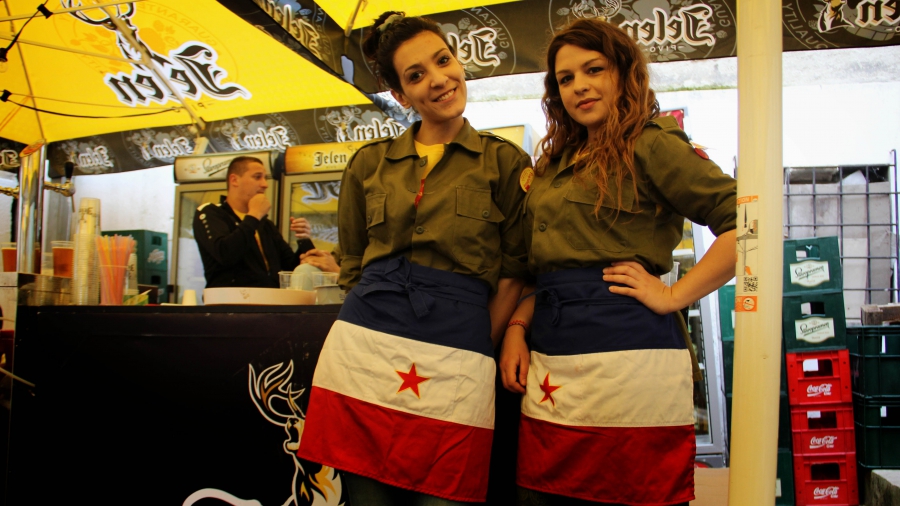 Wait staff with aprons made of the flag of the former Yugoslavia at a bar in Belgrade.

“I was crying. I was watching TV, and soccer was on,” recalls Nedelkovski. “They stopped [the game] to say he was dead.”

Born to peasants in what is now Croatia, Tito was trained as a locksmith, but rose through military and political ranks. He spent his later years hosting international dignitaries. He charmed celebrities such as Sophia Loren and Elizabeth Taylor.

“Tito was a man of the world like Che Guevara,” says Nedelkovski. “For the 50 years of Yugoslavia and Tito’s rule, the Balkans were stable. They weren’t considered the powder keg of Europe. And now we are back to being the powder keg.”

After Tito’s death, nationalists from the country’s different ethnic groups began pushing for independence. Without Tito’s authority and charisma, Yugoslavia splintered. The 10 years that followed saw sectarian conflict, ethnic cleansing and massacres. By the time it was all over, more than 100,000 people were dead and about 4 million were displaced from their homes and villages.

Increasingly, young people, who never lived under Tito’s united Yugoslavia, but suffered war and economic hardship after in the years after its collapse, are also looking back.

“He was very charismatic and he could unite all those different nationalities,” says Pavle Nedic, 20. “He could turn nationalism, in this part of the Balkans, down and unite all of them.”

In the postwar years much of the now seven independent states were in ruins and their economies in shambles. Today in Serbia, the biggest of the former Yugoslav states, unemployment is 20 percent and almost 50 percent among youth. 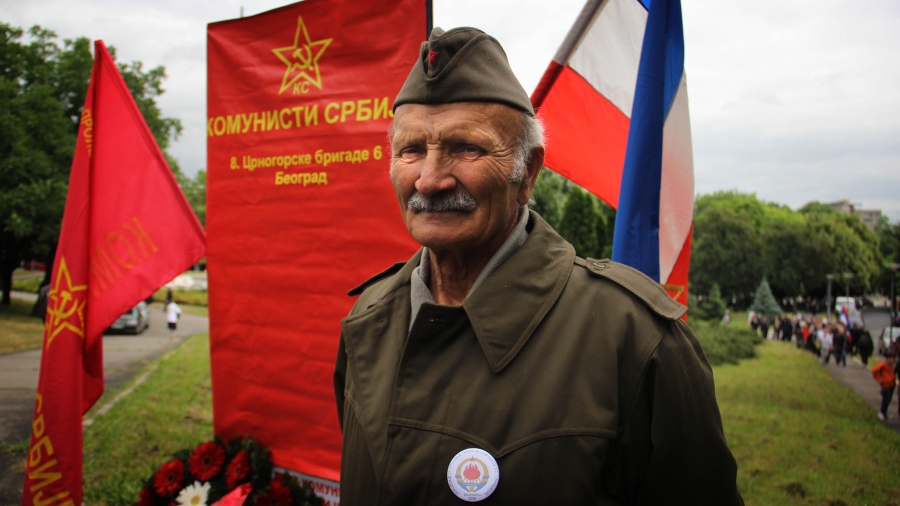 Man stands in front of a banner for the Serbian communists.

In a bar across town, young Serbs raise a 10-foot flag of the former Yugoslavia — blue, white, red — with a gold-lined red communist star in the middle. People applaud as a Tito impersonator arrives, in a crisp white uniform with gold trim and red tie.

Pavle Ilic watches in the crowd. He grew up on stories of Tito, Yugoslavia and a better life from his parents and grandparents.

But Ilic notes that Tito was far from perfect. He imprisoned his political opponents and ignored calls for reform.

For many young people here, Yugonostalgia is about more than Tito; it’s about economic stability and peace for the people of the former Yugoslavia.