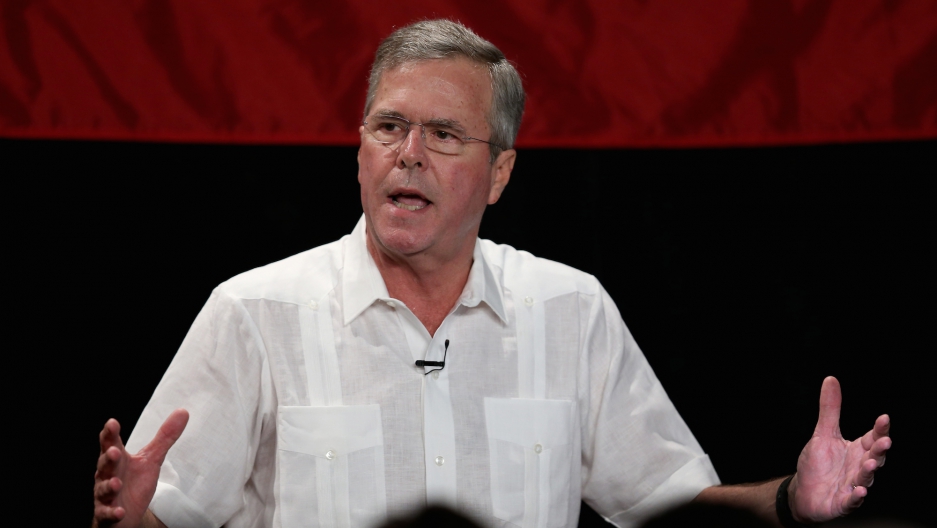 BEIRUT, Lebanon — Rest easy, world. The Republicans have a plan to defeat the Islamic State. And yes, it involves more bombs.

As the 2016 presidential election draws closer, a growing number of potential candidates have begun to distill their time-tested criticism of the Democratic Party’s foreign policy into something resembling a platform.

While there are slight differences among the potential Republican presidential candidates, it is fair to say that the majority believe that the US needs to take a more active role in Iraq and, to a lesser degree, Syria.

Ground war: What is it good for?

The Obama administration’s strategy for defeating the Islamic State (IS) has two parts: attacks from the air and support for local forces on the ground. Among those ground forces are the Iraqi government, the Kurdish peshmerga and a small number of moderate Syrian rebels.

The Republicans want to go further.

Out in front, advocating all-out, boots-on-the-ground war, are Lindsey Graham and Rick Santorum. Both want to see the deployment of 10,000 American soldiers in Iraq and Syria to fight IS. Exactly how these combat troops would operate in Syria, alongside the Assad government and fighters from Hezbollah and advisers from Iran, is unclear.

In addition to a ground force, both would like to see intensified airstrikes, as would Marco Rubio, Senator Ted Cruz and Mike Huckabee. Santorum seems to be the most enthusiastic.

“We need to hit ISIS, to defeat them,” he told the Conservative Political Action Committee’s convention in Maryland in February. IS is also known as ISIS or ISIL. “If ISIS wants to establish a 7th century caliphate, well let’s oblige them by bombing them back to the 7th century.”

In addition to airstrikes, a number of candidates (and singer/armchair analyst Cher) want to “arm the Kurds.”

Republican hopeful Rand Paul has taken up this cause with the most vigor. His position is that the US should send arms directly to the Kurdish peshmerga — the armed forces of the semi-autonomous Kurdistan region of Iraq — which has had arguably more success in beating back IS than any of its other opponents.

“I think any arms coming from us or coming from any European countries ought to go directly to the Kurds. They seem to be the most effective and most determined fighters,” Paul told Brietbart.com in March.

The US, together with a number of European countries, is already sending arms to the peshmerga through Baghdad, despite complaints from Kurdish officials that some of the weapons never turn up.

In response to Republican calls, the Obama administration said it would be illegal to bypass the Iraqi government. This is something Republicans in the House of Representatives have attempted to rectify. A proposed bill would allocate $128 million to directly arm the Kurdish peshmerga, skirting the federal government entirely. The bill goes even further, stipulating that if the Iraqi government of US ally Prime Minister Haidar al-Abadi does not include “ethnic and sectarian minorities within the security forces of Iraq,” then the US would stop sending aid to Baghdad altogether.

That last condition seems designed to push Baghdad toward more engagement with the Sunni tribes of Iraq who are willing to fight IS. Many have spoken of being sidelined by Baghdad, and having heavy weapons withheld.

Then there is the curious case of Jeb Bush, a Republican frontrunner, who would become the third member of his family to oversee a war in Iraq should he triumph next year.

Bush has been less than forthcoming about how he would defeat the Islamic State, an organization which many sensible heads argue his brother George W. Bush had a hand in creating, albeit indirectly. (This argument didn’t go down well when a student pointed it out to Jeb at a campaign stop in Nevada).

He briefly broke cover on Sunday to argue that the Obama administration should embed troops with Iraqi soldiers "to help train them, to identify targets, to do what we do really well." US troops are already in Iraq to train the country's security forces, and US advisors are known to be working near the front lines in northern Iraq alongside peshmerga fighters — so Bush's strategy, which would mean US troops participating in offensive missions, is only a slight departure from what is already happening.

The trouble for Jeb Bush is that his campaign so far has spent more time fighting the last Iraq War — Would he have done it? Was it right? — than the one ahead. This will likely continue to be the case, despite Republican efforts to portray the rise of IS as a fault of the Obama administration.

Jeb Bush would become the third member of his family to oversee a war in Iraq.

Bush’s current line of defense is both succinct and entirely incorrect.

As analyst Brian Fishman pointed out to the Washington Post, “despite its setbacks, the [Islamic State of Iraq, also known as Al Qaeda in Iraq] was one of the strongest terrorist groups in the world even at its weakest point after the Surge.”

Al Qaeda in Iraq would go on to become the Islamic State we know today, widening its ambition and gaining strength as a result of the Syrian civil war.

So how effective would the Republican proposals be in pushing back IS?

A US-led coalition founded to “degrade and disrupt” IS has carried out more than 4,000 airstrikes in Iraq and Syria since August last year. Military officials claim those strikes have killed more than 8,000 IS fighters.

Despite this massive air campaign, IS has demonstrated its ability to continue capturing towns and cities in both countries. In the past two weeks the group took control of Ramadi, the capital of Anbar province in Iraq, and the ancient Syrian city of Palmyra. Would dropping even more bombs tip the scales?

As for putting US combat troops on the ground, that seems a very distant prospect, chiefly because it has very little public support. According to a Pew Research poll conducted in October last year, 55 percent of the American public oppose sending ground troops to fight IS, and only 37 percent are in favor.

Arming the Kurds directly would help Kurdish forces significantly, but they alone cannot retake the areas held by IS. Peshmerga forces have declared their willingness to engage in campaigns to retake areas with a Kurdish population, such as the city of Mosul, but are unlikely to venture much further.

Bypassing Baghdad could also have the unintended side effects of deepening the sectarian split in the country and alienating a key ally in the fight against IS. The Iraqi government would not take kindly to any US moves that could grant the Kurds further independence.

Absent from much of the candidates’ ideas is what can be done in Syria to combat IS. Implicit in that silence may be a recognition that any major action taken against IS in Syria could strengthen President Bashar al-Assad, whose removal they all support.

The Obama administration’s strategy in Syria has been to hit IS from the air and provide support where possible to moderate rebels on the ground. But that support has been meager, and had little effect.

Republican candidates have so far avoided a fundamental question about Syria: how to both topple Assad and the Islamic State. It’s easy to skirt around these questions in the early stages of the campaign, but come debate time, they will need an answer.