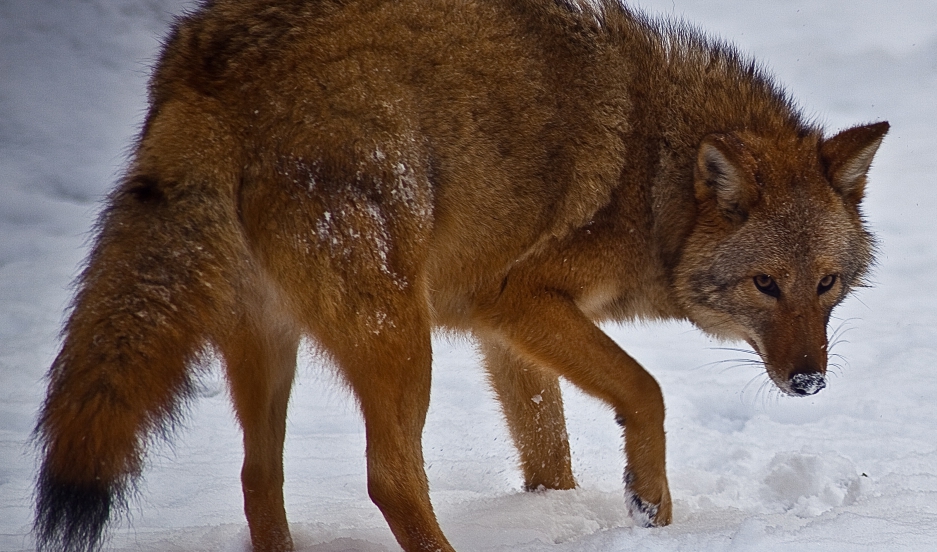 The eastern coyote is a wolf-coyote hybrid that has expanded its range across the eastern US and Canada.

Native wolves had been eradicated and the forests of the eastern United States long cut down when residents of western New York first began to notice the arrival of coyotes in the 1940s.

The coyotes of the Rocky Mountains and Great Plains were lithe and quick, usually weighing less than 30 pounds. But the newcomers were different.

“These things were unique,” says Javier Monzón, an evolutionary biologist at Stony Brook University in New York. They were bigger and stockier with larger skulls — all the better to kill white-tailed deer, which were making a comeback as forests began to regrow.

Indeed, scientists have since discovered these super-sized coyotes are only about two-thirds coyote. About 10 percent of their genes belong to domestic dogs and a quarter comes from wolves, with which they hybridized as they moved east north of the Great Lakes. “They’re not wolves and they’re not like pure coyotes from the West,” says Monzón, who has studied the animals’ genetics. Depending on their location, people call them brush wolves, coydogs, eastern coyotes or coywolves.

Monzón says hybridization enabled eastern coyotes to adapt quickly to fill the niche left by wolves. In fact, areas with the highest densities of deer had coyotes with the greatest proportion of wolf in their genomes. “There was a very rich resource that was waiting to be exploited,” says Monzón. “They’ve done very well here.”

A Nightmare of Our Time

Some scientists and conservationists see the coywolf as a nightmare of the Anthropocene — a poster child of mongrelization as plants and animals reshuffle in response to habitat loss, climate change and invasive species. Golden-winged warblers increasingly cross with blue-winged warblers in the US Northeast and eastern Canada. Southern flying squirrels hybridize with northern flying squirrels as the southern species presses northward in Ontario. Polar bears mate with grizzlies in the Canadian Arctic along the Beaufort Sea to produce “pizzly bears.”

All of this interbreeding upsets the conventional notion of species as discrete, inviolable entities. Moreover, some scientists and conservationists warn that hybridization will degrade biodiversity as unusual species are lost to genetic homogenization.

Partly scientists fear hybrids will be less fit than organisms that have evolved in place over eons. And often that is true, but the problem solves itself over time as hybrids lose out in the competitive race for survival.

Sometimes, however, the hybrids are more fit. Gradually they outcompete distinctive strains and species, wiping out biological diversity that has evolved over millennia. Often it is a common generalist species that swamps and essentially obliterates a rare, specialized and localized species. Many biologists view such occurrences as a net loss of biodiversity.

Prime examples are stocked rainbow trout that cross with native cutthroat trout in the U.S. West, driving rare subspecies into ever-tinier refugia; common barred owls pushing westward to Oregon and California that cross with threatened northern spotted owls; and bobcats in northern Minnesota that hybridize with lynx, posing “an underappreciated factor limiting the distribution and recovery of lynx,” according to one study.

Fear of the common overwhelming the rare can drive conservation decisions. For example, in the southeastern United States, wildlife managers are attempting to sterilize coyotes so they defend territory against other coyotes but won’t hybridize with the critically endangered red wolf, recently reintroduced to coastal North Carolina.

Other researchers see hybridization differently, though — as a shortcut to the kind of evolution that has benefited organisms since time immemorial. By this view, hybridization threatens some species but enables others to survive and prosper.

As scientists scrutinize genomes, the old idea of separate, radiating species — an ever-diverging tree of life — has come to be understood as more of a tangled web, says Michael L. Arnold, research professor of evolutionary genetics at the University of Georgia and the author of Evolution Through Genetic Exchange. Living things evolve into new species only to cross again and again.

Examples include hybridization between polar bears and brown bears long before modern climate change — during the most recent Ice Age, when shifting glaciers may have forced polar and grizzly bears into common regions. And gray wolves in forest regions owe their dark pelage to genes from domestic dogs — not a black lab of recent heritage, but the dogs that accompanied early humans from Asia perhaps 14,000 years ago. For that matter, humans swapped genes with Neanderthals, who survive (genetically speaking) today in Europeans.

Jim Mallet, a Harvard evolutionary biologist, has discovered that Heliconius butterfly species in the Amazon rainforest, far from significant human interference, have freely crossed with related species. The payoff? Acquisition of bright, distinctive colors to warn birds that the butterflies contain cyanide. The butterflies’ defense works only if the birds recognize it.

“It’s not just those color pattern genes,” says Mallet. “It’s going on all over the genome. When you have that level of fluidity, just estimating who got what from where is becoming really difficult,” says Mallet.

Scientists who view hybridization as a driver of evolution and biodiversity say it even has a role to play in future conservation. Rather than try to protect rare species, such as the red wolf, from hybridization at all costs, biologists should consider the advantages of “the potential adaptive benefits from genomic transfers,” Arnold says.

The coywolf is as good an example as any — a combination of coyote stealth and wolf robustness that has helped it adapt to a rapidly changing landscape.

This more tolerant view of hybridization has already scored one huge conservation success story. Faced with an isolated and severely inbred population of Florida panthers, wildlife managers in the state reinvigorated the population by releasing eight female cougars of a different subspecies captured in Texas. Opponents of the move were concerned that hybridization between subspecies would destroy what was unique about the Florida panther. But the infusion of new genes saved the population.

Scientists and conservationists shouldn’t reflexively try to enforce distinctions between species and subspecies, says Arnold. “I really don’t like this idea of purity, because if we really push that to its nth degree, we are a hybrid. So we need to get rid of us.”

This story first appeared from Ensia, an environmental news magazine.