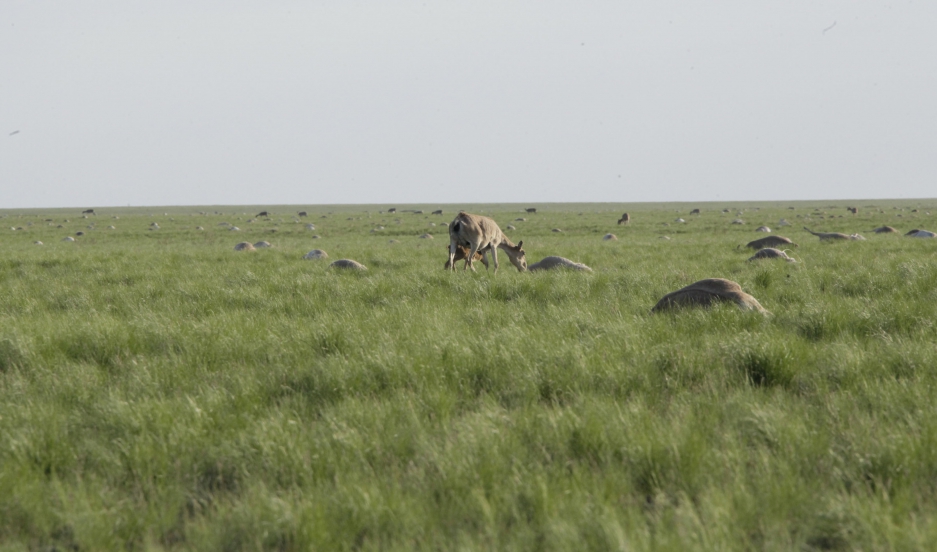 Saiga antelope with a baby grazes next to carcasses of dead antelopes lying on a field, in the Zholoba area of the Kostanay region, Kazakhstan, in this handout photo provided on May 20, 2015 by Kazakhstan's Ministry of Agriculture. About 20,000 endangered Saiga antelopes, killed by a suspected pasteurellosis infection, were found dead in Kazakhstan in a week, local media reported.

More than 60,000 animals in Kazakhstan mysteriously fell ill and died within hours of getting sick — decimating over a third of the global population of saigas, according to E.J. Milner-Gulland, professor of Conservation Science at Imperial College London.

“It’s not straight-forward. It seems like there was a big combination of environmental factors. Maybe some wet weather after a cold winter?  Maybe there was some virus as well?”

The saiga is about the size of a goat, sandy-colored in the summer and white and furry during the winter. It’s an unusual looking creature.

“The main thing you notice is its big bulbous nose. And it’s nose kind of swells up in the males when it ruts, when it’s trying to attract the ladies,” Milner-Gulland says.

The saiga has never needed any help attracting poachers, however. Its horns, used in traditional Chinese medicine, can be quite valuable. After the fall of the Soviet Union, many poachers in central Asian countries began killing the antelopes for their horns and smuggling them to China.

“When the Soviet Union broke up, the border with China opened and so it was possible to trade for the horns and at the same time there was a massive rural poverty because all the money for subsidized agriculture and wages was just withdrawn overnight so nobody had any money, they lost all their livestock so this was a way for getting money,” says Milner-Gulland.

The money for conservation had dried up as well.  All of these factors together created the perfect environment for poaching.

Within a decade, between the break-up of the USSR and the year 2000, the saiga population had been decimated by 95 percent.

Over the past decade, scientists and conservationists have worked to restore the saiga and have had success particularly with this herd in Kazakhstan, which makes this latest mass death all the more sad.

However sad this may be, if there was any silver-lining, it’s the fact that it was this particular herd that was hit with the sudden disease and not one of the smaller herds.

Milner-Gulland has been studying the animals for 25 years and has watched the saigas bounce back from near extinction; she is hopeful that this population will bounce back yet again.