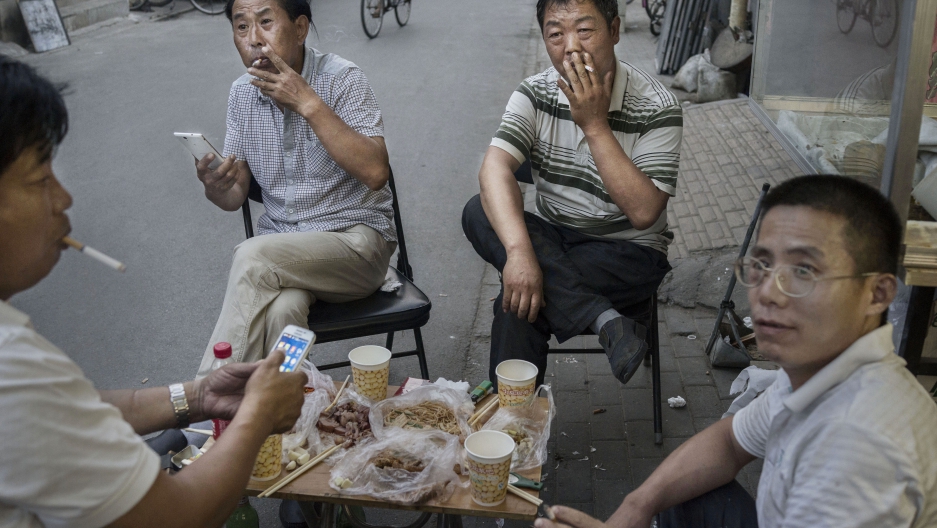 Chinese men smoke together as they eat in the street on June 1, 2015 in Beijing, China. Beijing introduced strong new measures June 1, banning smoking in many public places, in a bid to stave off a growing health crisis.
Credit: Kevin Frayer
Share

Under the new rules in Beijing, one of the world's most populous cities with 21.5 million people, anyone who violates a ban on smoking in restaurants, hotels, schools, hospitals and in certain outdoor public places must pay a 200 yuan ($32.25) fine. That is 20 times the current, albeit seldom enforced, penalty.

Anyone who breaks the law three times will also be named and shamed on a government website. And businesses can be fined up to 10,000 yuan ($1,600) for failing to stub out smoking on their premises.

Smoking has created a serious health crisis in China, where more than 300 million smokers have made cigarettes part of the social fabric, with millions more exposed to secondhand smoke, heightening the rate of respiratory and heart diseases.

More than half of Chinese smokers buy cigarettes at less than five yuan (80 U.S. cents) a pack — a small fraction of the cost in Western countries.

The market is dominated by the state-owned China National Tobacco Corp, by far the largest tobacco company in the world. Tobacco sales are estimated to make up 7 to 10 percent of government revenue and the industry provides thousands of jobs.

"When you are looking at trying to combat tobacco use in China you are almost talking about trying to slow down and turn around an oil tanker," said Shane MacGuill, a tobacco analyst with research firm Euromonitor International.

At an event to promote the ban on Sunday, Beijing authorities draped Bird's Nest Stadium, built for the 2008 Olympics, with giant banners bearing a no smoking sign.

Dozens of middle-aged women volunteers performed a choreographed dance to promote the campaign, including three hand-signals the government recommends locals use to encourage others not to smoke. One of the signals is a mock cough, and another depicts a time-out sign with one palm over the other.

On Monday, enforcement of the bans appeared to be spotty in local restaurants and public places. Some bore no smoking signs explaining the new rules.

"I think this time it's really big, and it will definitely be very serious," said Xu Jingyuan, a 25-year-old saleswoman who was told by the waiter of a neighborhood eatery that she had to smoke outside. "They've already started out quite strictly with the policy this time."

Other restaurants were allowing smokers to light up only at outdoor tables.

One security guard near a popular public square in Beijing's southwest said he and his colleagues had received instructions to tell smokers to leave the area.

"The ban starts today, but we're giving some leeway early in the week," said the guard, surnamed Zhang. "Just for today, go ahead and smoke."