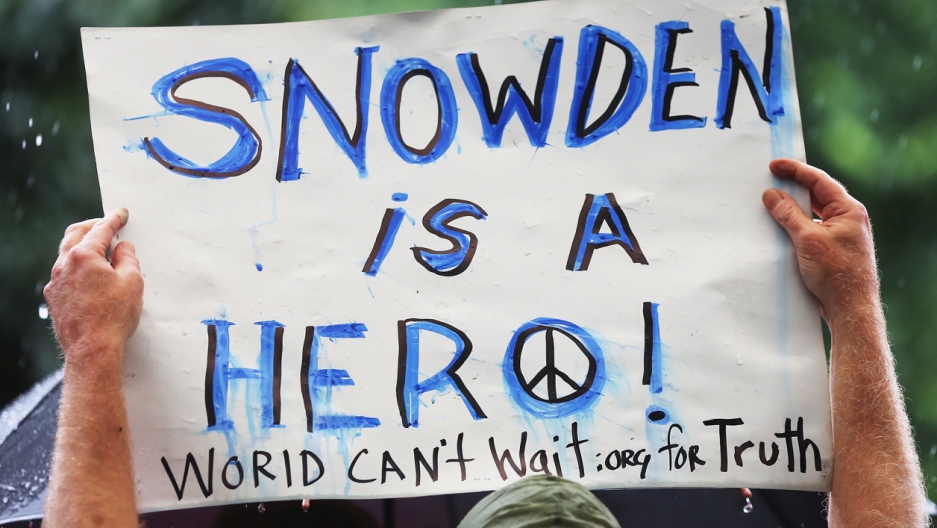 A supporter holds a sign at a small rally in support of National Security Administration (NSA) whistleblower Edward Snowden in Manhattan's Union Square on June 10, 2013 in New York City.
Share

Americans got a little more free last night. A key part of the US Patriot Act that allowed intelligence agencies to collect telephone metadata in bulk, and then store it for five years, has expired.

A new law — called the US Freedom Act — will likely take its place soon enough. The act, which is backed by US President Barack Obama and most of the Democratic party, would replace the bulk collection of domestic phone data with a more targeted system. And crucially, the information would be held by telecommunications companies — not the government. The National Security Agency would have to get court approval to gain access to it.

Civil liberties groups say the new law is “weak,” and that the government should consider more far-reaching reforms.

Still, it's hard to believe that such reform would have taken place without Edward Snowden, the former NSA analyst who is now one of the world's most famous whistleblowers. Snowden, who faces arrest and prison (if not worse) if he returns to the United States, is living out his days in Russia.

The trove of documents Snowden released publicly uncovered the NSA's controversial method of collecting phone data, among other things. It sparked a nationwide debate about the balance between protecting Americans from terrorist attacks and protecting their privacy. Civil liberties related to privacy have eroded in the name of security since the attacks of Sept. 11, 2001.

For a while there, the documents Snowden released led from one shocking revelation to another. And while most Americans, Republicans and Democrats alike, probably aren't going to fight for the NSA's right to keep their telephone metadata, that bulk collection represents just one way the US government is listening in. Intelligence agencies also have some workarounds, including a grandfather clause that would allow them to continue using expired practices for cases they began investigating before the June 1 deadline.

Meth in Asia is ridiculously cheap. It is so cheap that it is available to the rich and the poor alike. The drug is democratic in that way. Unlike so many other things in this world — education, food, shelter, water — pretty much anyone in Asia can afford meth.

How cheap is it? It is cheaper than a Whopper at Burger King. In some parts of rural Myanmar, where much of the stuff is produced, a meth pill — an increasingly popular way of ingesting the drug — can go for as little as 50 cents.

“These unruly hills are home to a patchwork of militias. Some are aligned with the government. Some have battled the government for years. But all types of militias can exploit the area’s general lawlessness to oversee underground labs that churn out the bulk of Asia's meth,” Winn writes.

The numbers are hard to exaggerate.

Even the amount of meth seized by authorities is incredible, and that's just a fraction of what's being produced. Last year the police confiscated 270 million pills, which is enough to keep every man, woman and child in California high for a week straight. The United Nations estimates that about 2 billion pills are produced every year in Asia. That's enough to keep almost everyone in the entire United States high for a week.

That's a lot of meth.

It's enough to make the long, dark winters worth it. Sweden's government requires — requires — parents to take, and employers to offer, 480 days of paid leave after having a child. That's sort of hard to fathom for most people around the world.

In case it's unclear, that's well over a year of time off to spend with your kid. And it's all paid. You have until your child's eighth birthday to use it all up. Each parent has to take a least two months. The rest of it can be split up however you want.

But now, the ever-concerned Swedish government is worried that most families are giving the mom most of that extra time and that dads aren't spending enough time with their children. So it is going to require dads to spend a third month of paid leave with their kids from here on out.