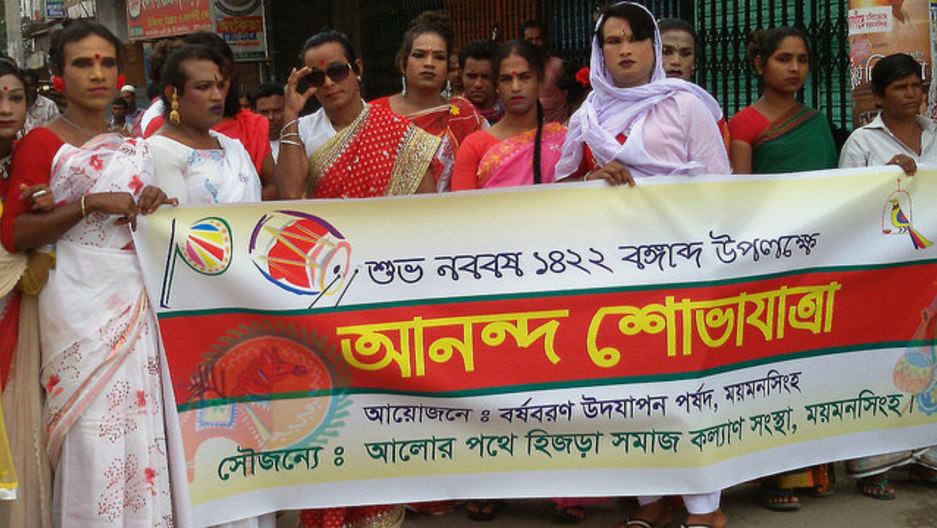 A group of hijras attend a rally in Mymensingh during this year's Pohela Boishakh celebrations.

Bangladesh's government is planning to recruit hijras, who have been officially recognized as a separate gender in Bangladesh since 2013, as traffic police in an attempt to rehabilitate and offer them new employment.

Hijra is a feminine gender identity adopted by some people who are born male or intersex, often labeled as transgender by the West. The issue of transgender rights has been big worldwide with the popularity of the Emmy-winning TV series "Transparent" and the decision of Olympian Bruce Jenner to change his name to Caitlyn Jenner and live as a woman. Jenner's new Twitter page got 1 million followers on Monday in just over four hours — faster than anyone, even President Barack Obama.

The Bangadeshi government's initiative to hire the hijras as traffic police has received high praise from Bangladeshis on the web.

Hijras face widespread discrimination in Bangladesh and have trouble finding work. Ex-banker Syed Ashraf Ali wrote in an op-ed in the Financial Express:

Rubait Saimum, however, cautioned his neighbors from praising the government's initiative before hearing the practical details:

Dev Saha thought that hijras would do better than the average traffic police. For example, he mentioned how two hijras captured two of the men who had attacked and killed blogger Washikur Rahman in the street in March as they fled.

The department of social services estimates that there are over 10,000 hijras in Bangladesh. Since the 2012, the government has allocated about $1.15 million to the hijra skills development program.

Dhaka, the capital of Bangladesh, is one of the most unlivable cities in the world, according to the Economist Intelligence Unit, and its extreme traffic congestion contributes a lot to this fame. The city simply can’t handle the increasing volumes of traffic, and it is a source of stress for many. There's hope that as traffic police, hijras will be able to contribute to reducing the traffic congestion.