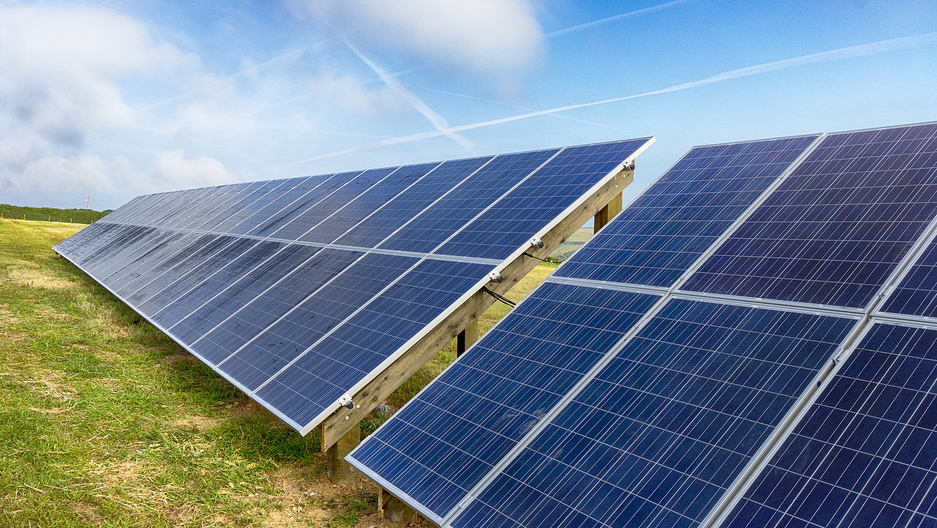 A solar panel array on a farm in Cornwall, England, UK.

In a new book, noted environmentalist Lester Brown says the shift from fossil fuels to renewable energy sources is not only unstoppable, but will happen much faster than anyone expected.

“I think we're going to see a half-century of change compressed into the next decade,” Brown says. “And this is partly because the market is beginning to drive this transition.”

Brown is the founder of Worldwatch Institute and the Earth Policy Institute. He has written 54 books and was called "one of the world's most influential thinkers" by the Washington Post. So when he speaks, people tend to pay attention. His new book is called "The Great Transition: Shifting from Fossil Fuels to Solar and Wind Energy."

“This is putting the utilities in an awkward position,” he points out, “because as the number of their customers diminish, they have to charge more for their electricity, and in so doing they encourage still more people to put panels on the rooftop.”

In areas of Australia, one of the biggest coal producers in the world, there is “almost an epidemic of solar panels appearing on rooftops.”

“Australia is rather spread out,” Brown explains, “and if you have coal, you have to have a big plant to make it economic, then you have to build a huge grid to move it. It’s the cost of distribution, not the production of electricity, that is the death-knell in many situations for coal-fired power.”

The fossil fuel industries know that the transition to renewables could, in a sense, be the end for them, Brown says. So some utilities are trying to forestall the transition away from coal by looking for ways to put a tax or charge on solar panels. The big oil companies are in a similar fix, Brown points out. For the last century they have had an ever-growing market for oil, but now they are suddenly watching that market shrink.

“They remind me of a deer caught in the headlights at night; they just don't know where to go,” he says. “The people who work for oil companies have spent their careers in a period of growth — always more, more, more. Suddenly it's now less, and that's a major shift and a major adjustment within the energy sector.”

Brown contends the fossil fuel industry needs to think differently. “[Their] business plan should not be designed to thwart the efforts to move to clean energy sources, but how to become part of it. ... They exist as corporations. They have experience in setting goals and reaching goals and they need to rethink their game plan. Otherwise, they're going to be history.”

For Brown, the most fascinating part of this great transition is what he calls the "geography of energy." During our lifetimes, he says, we’ve been getting much of our energy from halfway around the world. “Now suddenly, as we're getting our electricity from solar panels, it will be 10 feet above our heads,” he exclaims. “That’s a big change.”

"Our energy economy is now becoming localized, which means there's no one between us and the source of our energy,” he continues. “When you have rooftop solar panels, you control your energy source, and no one else can really interfere with it. No one can cut off the supply. So, it's a new ballgame, in a sense, and a very exciting one.”

All of this could have political and social implications, as well. It could dramatically reduce the role of corporations, like the oil industry and the coal industry — and they know it, Brown says. “But it's really not stoppable. It's underway and it's going to continue because it's market-driven and it's driven by strong popular support." Polls suggest that anywhere from 70 to 90 percent of the US public supports developing solar and wind resources.

But a crucial question remains: who’s going to win the race? Is the transition going to come in time to blunt the worst effects of climate change or is disruptive climate change going to overtake us?

“We've already seen some of the effects of climate change,” Brown says. “It's started. The question is whether we can stabilize the situation before climate change spirals out of control. I think we can, but we don't have forever to do this. We have to move quickly.”