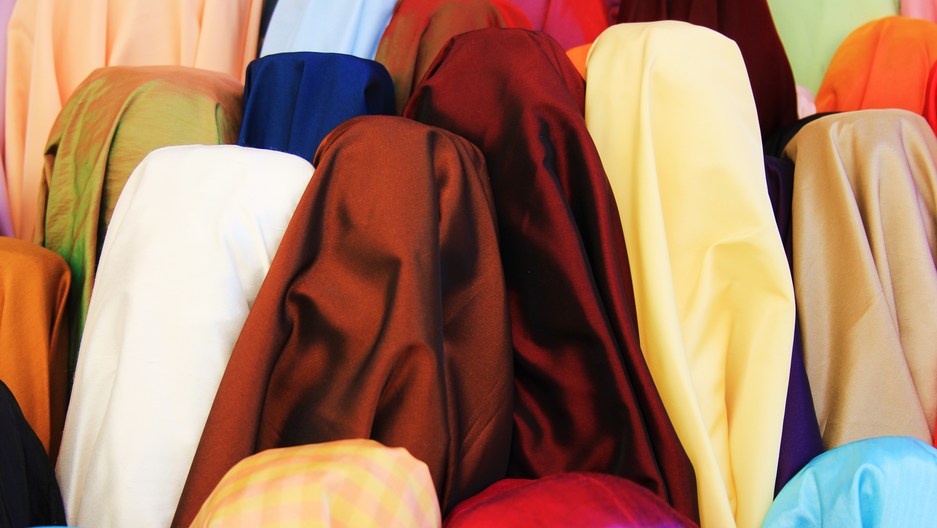 In 2004, France banned the wearing of all conspicuous religious symbols in grade schools. Then, in 2010, France enacted the so-called "Burqa ban," making it illegal for Muslim women to wear the traditional face and body covering in public.

Rayhana, who just goes by her first name, is an actress, playwright and a filmmaker, in Paris.

She points to a group of her characters, sketched out in pencil, taped to the wall. The movie she’s working on is an adaptation of the play that brought her fame in France. It takes place in a bathhouse in Algeria. Most of the characters are dressed in robes and towels; one is dressed in a burqa.

She says this character is "super Islamist," and not very nice. Her characterization isn’t accidental. As a feminist in France, Rayhana has strong feelings about the burqa.

"You cannot be part of French society if you are wearing the burqa,” she says. “The burqa is hiding the body and even the face."

Rayhana made international headlines in 2010 when she was attacked by two men on her way to the theater. They threw petrol on her and then tossed a cigarette at her face, which luckily didn’t set her ablaze.

"It was something I didn’t expect at all and it was really one of the most terrible days of my life," she says. "I still have nightmares about it."

She knew they were angry about her play, which was critical of Islam. Although she grew up Muslim, Rayhana, 51, is now an outspoken atheist. Although she thinks wearing the burqa is a choice, she says it is no less than a sign of women’s inferiority. When the French Parliament banned it, she was all for it.

"For me the burqa is a sign of submission and what is submission? It means it negates liberty; it means that we’re a slave. So I was really for this prohibition on the burqa," she says.

Henri was a member of the Stasi Commission, a group of 20 experts, lawyers, academics and former ministers who met in 2003 to review the place of laïcité — the French version of separation of church and state — in modern day France. The Stasi Commission met years before the so-called "burqa ban," at a time when France was preoccupied with religion’s place in public grade schools.

"We didn’t want to restrain personal expression. We wanted to say, 'You can express your religious views but not everywhere, and there are places where wearing these symbols can pose a problem,'" he says.

The commission ultimately recommended a ban on students and teachers wearing any kind of religious symbols in grade schools. This includes all Muslim headscarves, but also yarmulkes and crosses. According to Pena-Ruiz, their intent was to shield students from conflict.

"Though it may appear that we are limiting liberty, we are actually protecting the liberty of these young people,” he says. “A school is a place of study and the school must focus on what is common to the students, not on their differences.”

As another scholar put it, laïcité ensures that everybody in France is equal whether they like it or not. Supporters of laïcité say differences, like religion, only detract from shared values. But opponents say it unfairly targets France’s Muslim population.

That means people like Hanane Karimi, who I meet in central Paris. She's wearing jeans, a red sweater, and a near-matching red hijab knotted tightly behind her head. As we walk on the street, she drops her head. She looks up and focuses her gaze only when talking to me or when reading the metro map. She’s received some unwanted attention in the past.

"The first time I was with my little brother and an old woman with her grandchild says to me, ‘What you are wearing is provocation.’ I was really shocked,” she says. “I could never imagine that someone could feel my veil is a provocation."

Karimi says that rather than promoting harmony, the burqa ban and the ban of religious symbols in grade schools specifically stigmatizes Muslim women and forces them to choose between their religion and their national identity.

She adds that one of the most damaging things about laïcité in France is that it conceals the real issues facing Muslim women. How do you fight chauvinism or racism — or any topic, really — if there isn’t freedom of expression?

"I’m convinced if we don’t put it in the public space, we don’t have power to change,” she says. “It is our right to speak about it. That is the challenge, to speak about what is taboo."

The French government shows no movement toward revisiting the ban on burqas. And right now, France is debating whether to extend the headscarf ban from grade schools to universities as well. Support is wide-reaching and includes former President Nicolas Sarkozy on the right and the current minister for women’s rights on the left.