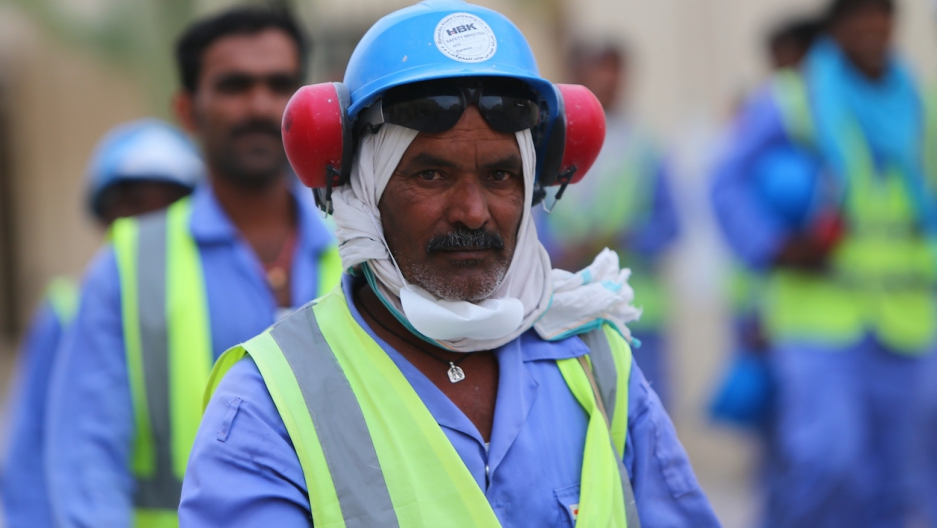 PARIS, France — FIFA, soccer’s governing body, is currently in the midst of the biggest — and arguably, first — corruption probe in its history.

The charges against nine of its top officials couldn’t be more damning: the US Justice Department, which is leading the investigation, has accused them of participating in “rampant, systemic and deep-rooted” corruption that spans several years and many millions of dollars.

More from GlobalPost: United States welcomed as liberators by soccer fans around the world

The picture that the indictment paints is sickening. But there’s something even worse: the effect that the soccer industry’s single-minded pursuit of profits has on human lives.

Certain injustices perpetuated in the name of FIFA’s lucrative business will never make it onto the charge sheet. They include the virtual enslavement of construction workers, child labor, mass evictions and police violence.

Here are just a few instances when the ugliness in the beautiful game touched far more than a few FIFA officials.

Up until the 1990s, most of the world’s soccer balls came from Pakistan: an estimated 75 percent of all hand-stitched balls, the only kind professional players use. The center of the industry was the region of Sialkot, where investigations found more than 7,000 children aged between 5 and 14 stitching soccer balls full time. A 1996 study revealed that some worked as many as 11 hours a day, earning as little as 50 US cents per ball, each of which typically took half a day to make.

When childrens’ and labor rights organizations brought the abuses to light, FIFA was forced to act. In 1998 it adopted a code of conduct banning the use of child labor by its contractors and subcontractors. While the code has done much to weed child labor out of the soccer supply chain, in Pakistan and beyond, recent investigations found that the practice has not been eradicated.

What’s more, campaigners say that FIFA and its suppliers across Asia have failed to address other abuses of workers such as low wages, long hours, unsafe conditions and discrimination against women. And that’s just soccer ball suppliers. Similar problems are believed to exist throughout the sporting goods industry that produces the jerseys, mascots and other merchandise that makes FIFA and others billions.

2. When the World Cup had its own courts

How’s this for irony: FIFA, probably one of the only organizations with a lower approval rating than Congress, once demanded the right to say how others should be judged. The time was 2010 and the place was South Africa, host of that year’s World Cup. FIFA required the country to establish costly fast-track “World Cup Courts” to deal with crimes committed at the tournament.

More from GlobalPost: These are a few of FIFA's biggest fish now under indictment

Some said the sentences doled out were exceptionally harsh: five years’ imprisonment for the unarmed robbery of a cellphone, for instance. They also moved worringly fast. In one notable case, two Zimbabweans mugged some journalists on Wednesday, were arrested on Thursday and by Friday were beginning 15-year prison terms.

Some of the “criminals,” meanwhile, were only criminals in FIFA’s eyes: like the two Dutch women detained for wearing orange dresses to a match in Soccer City. Their offense was “ambush marketing” for a beer company that hadn’t paid FIFA for the privilege of being an official sponsor. It was only a crime thanks to something called the 2010 FIFA World Cup Special Measures Act, a special piece of legislation that saw South Africa change its own laws — and even contravene the rights guaranteed in its constitution — for the duration of the tournament. Fair play, indeed.

3. When the poor were evicted to make room for fans

Displacing your most vulnerable members of society is as much a World Cup tradition as, well, corrupt officials allegedly siphoning off eye-popping amounts of cash. In South Africa in 2010, organizers were accused of forcibly removing slum dwellers, squatters and homeless people from areas near World Cup venues, either to build accommodations for tourists or simply to spare them the sight of poverty. In Cape Town alone, several thousand people said they were forced to move into tin shacks in a settlement they compared to a concentration camp.

Meanwhile hawkers, street food vendors and any other traders who hadn’t paid a hefty fee were expelled from the “exclusion zones” established — on FIFA’s orders — around match venues. Some reported being arrested and harassed by police; some said they lost their goods and their livelihoods to the raids.

World Cup organizers in Brazil took notes. By the time the fellow BRICS nation hosted the tournament four years later, critics claimed as many as 250,000 people across the country had been evicted or threatened with eviction as part of the preparations. In Rio de Janeiro, at least 19,000 families were removed and some of the city’s oldest favelas demolished, residents reported. While authorities are bound to provide better or at least equal living conditions for those they displace, according to the United Nations rapporteur on adequate housing, in Brazil most of those evicted ended up worse off than they started.

4. When police cracked down on anti-World Cup protesters

Protesters are about as welcome at a FIFA tournament as a taxman at its headquarters. In June 2013, Brazilians began voicing their discontent with social issues including the massive cost of “their” World Cup and its little brother, the Confederations Cup, which Brazil was hosting at the time. The authorities’ answer was swift.

The more than a million demonstrators around the country were met with what Amnesty International would later describe as a “violent and abusive” police response. The rights group documented indiscriminate firing of tear gas, excessive use of rubber bullets and beatings with batons. Hundreds were injured and hundreds more detained, often without evidence they’d done anything other than exercise their right to peaceful protest.

That wave of demonstrations died down, but authorities remained tetchy throughout the build-up to the 2014 World Cup. As riots broke out again to coincide with the opening games, police were once more accused of heavy-handed tactics such as shooting stun grenades and tear gas at unarmed protesters and journalists. Behind the scenes, security forces reportedly intercepted emails and spied on Facebook activity of people judged to be “violent protesters” at risk of disrupting the tournament. Good times.

5. When gay supporters were told not to have sex

While FIFA is happy enough to get host countries to change their laws if they affect their sponsorship deals, when it comes to denouncing anti-LGBT legislation it’s surprisingly hands-off. So hands-off, in fact, that FIFA has advised gay supporters traveling to homophobic Qatar for the 2022 World Cup to quite literally keep their hands off.

“I would say they” — gay visitors — “should refrain from any sexual activities,” FIFA president Sepp Blatter opined in 2010, after his organization had awarded international soccer’s biggest prize to a country where homosexuality is illegal. He later apologized for the remark. But guess what, the 2022 World Cup is still in Qatar.

You know who else does a terrible job of making LGBT people welcome? Russia, host of the 2018 World Cup. By extraordinary coincidence, Swiss prosecutors are currently investigating the bidding processes for both the 2018 and 2022 World Cups, which they suspect were tainted by “criminal mismanagement.”

What is possibly soccer’s greatest human tragedy is still unfolding: the deaths of hundreds of migrant workers in Qatar.

The human toll of FIFA’s corruption, in one chart http://t.co/reXXZRhkt4 pic.twitter.com/7NI1QiVxPF

Laborers from Nepal, India, Sri Lanka and elsewhere who are building the infrastructure needed for the 2022 World Cup describe conditions close to slavery, where wages are withheld, passports confiscated, work demanded in 120-degree heat, even drinking water denied. If something doesn’t change, and soon, the International Trade Union Confederation warns that at least 4,000 migrant workers will die in Qatar before the opening whistle is blown.

Will something change? Hmm, let’s see: on the one hand we have Qatar, a sovereign state where political parties and trade unions are banned. On the other we have FIFA, whose general secretary Jérôme Valcke once famously declared: “Less democracy is sometimes better for organizing a World Cup.” Thousands of exploited workers would disagree — but happily for Valcke and his cronies, they don’t get a say.