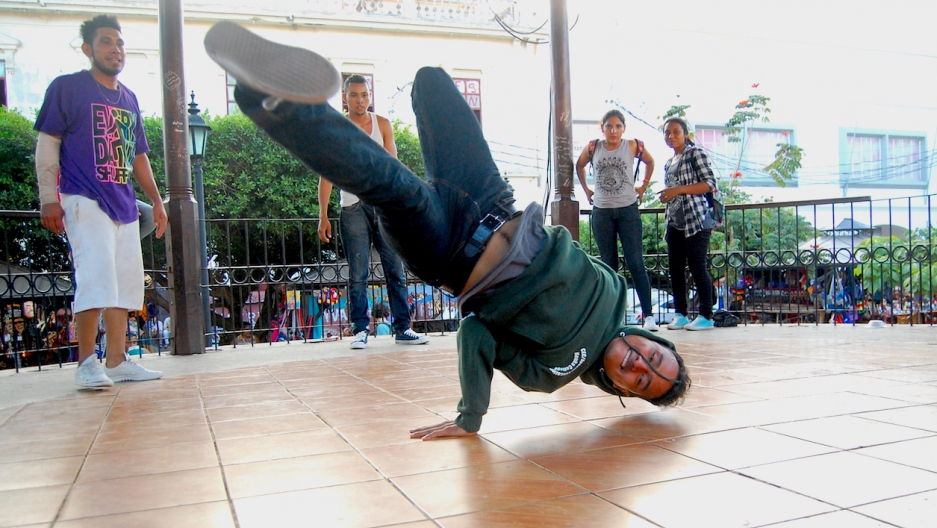 LEON, Nicaragua — As sunset approaches, Leon’s central plaza explodes with music and dance, but not the typical Central American folkloric kind. A crew of break dancers and rappers shows off “power moves,” spinning on their heads, contorting their bodies, and shooting their legs into the air.

The dancers, who range in age from about 15 to 30, call themselves “b-boys” and “b-girls” — break-boys and break-girls. They are the vanguard of a break dancing hip-hop movement that has spread across Nicaragua in recent years.

As traffic roars around the plaza, a crowd of curious onlookers gathers around the gazebo where they perform. Students on their way home stop to watch in fascination.

“You can’t compare this to karate!” marveled one 12-year-old boy in a school uniform. Turning to a friend, he asked, “When are you going to do that?” Leon, Nicaragua b-boy crew, Styleboy, has won two Nica Killed the Beat competitions in the past decade and they show no signs of slowing down during every night's practice at the central park's gazebo.

In some countries where the now globalized hip-hop genre has taken root, the music has a sharp political edge. It originated in the Bronx during the 1970s as a way for black Americans to reclaim their collective voice and escape marginalization and racial oppression. But Nicaraguans see it as an outlet to excel as an artist, be it in dance, rap or graffiti. Their form rarely touches on themes of social or political injustice.

One exception is Majo y Mafe, a female rap duo from Managua, the capital. They delight in targeting misogyny.

“I’m not weak or submissive. My words will notify,” they rap to each other in one of their most popular songs.

Until a few years ago, young Nicaraguans interested in hip-hop practiced mainly alone.

Then in 2009, Mauricio Sandino, a pioneering break dancer from Managua, began bringing various groups together. Sandino estimates that 15 to 20 break dance crews are active in Nicaragua, with names like Electric Lions, New Level, and Street Talent.

In an effort to showcase them, he has staged several competitions called “Nica Killed the Beat” that feature dancers, graffiti artists, and rappers from around Nicaragua and other Spanish-speaking countries.

By day, many crew members work on construction sites, in factories, or as security guards. B-boy Yuiman says being part of a crew helped him recover from drug addiction. Students who break dance say it helps them blow off steam after class. It can also bring in needed cash. The most accomplished b-boys make money working in television commercials, often for cellphone companies. They are paid to perform in schools and at public events. Winners of break dance competitions can take home up to $1,000 — a huge sum in a country where dinner often costs just a few dollars.

Some b-boys also fancy themselves graffiti artists. One named b-boy Hack tags “HACK” in large letters on walls around Leon.

Leon’s most prominent break dance crew, Styleboy, which has won top prizes at “Nica Killed the Beat” battles, performs at the city’s gazebo almost every night.

Even though dusk is approaching as they take the stage, the tropical heat remains intense. Dancers wear colorful hoodies and T-shirts, changing them every few minutes as they become drenched in sweat. They attract big crowds in a country where two-thirds of the population is under 30. One of the many graffiti murals found many of Leon's parks.

This city has long been known as a cradle of poetry, and hip-hop performers see themselves as a new generation of artists. Their culture may not fall too far from Leon’s original tree of artistic creativity. Great poets of the past, including the 19th-century master Ruben Dario, may be seen as having set the stage for Nicaragua’s emerging hip-hop movement.

Some in Leon, however, scorn the style and say it has nothing to do with the spirit of poetry. “Rap is monotonous,” said one local poet, 63-year-old Jaime Buitrago Gil. “I like polyphony.”

Many younger people think otherwise. “It’s better that they dance and draw on walls than drink on the streets,” said a 31-year-old woman named Marjorie, who sells bracelets half a block from the gazebo. An ice cream vendor nearby, also in his 30s, said the b-boys are “emotionally creative, liberated kids.”

Styleboy has a flow and energy that clearly captivates the evening crowd. Dancers cheer each other on, take turns at the center of the floor, and occasionally injure themselves with nothing but companionship to mitigate the pain.

B-boy Caletn, 15, is Styleboy’s youngest member and hopes to become a professional dancer.

“My style is fast,” Caletn said during a break in Styleboy’s show. His new generation of hip-hoppers is reshaping this country’s cultural identity, and seems unstoppable.