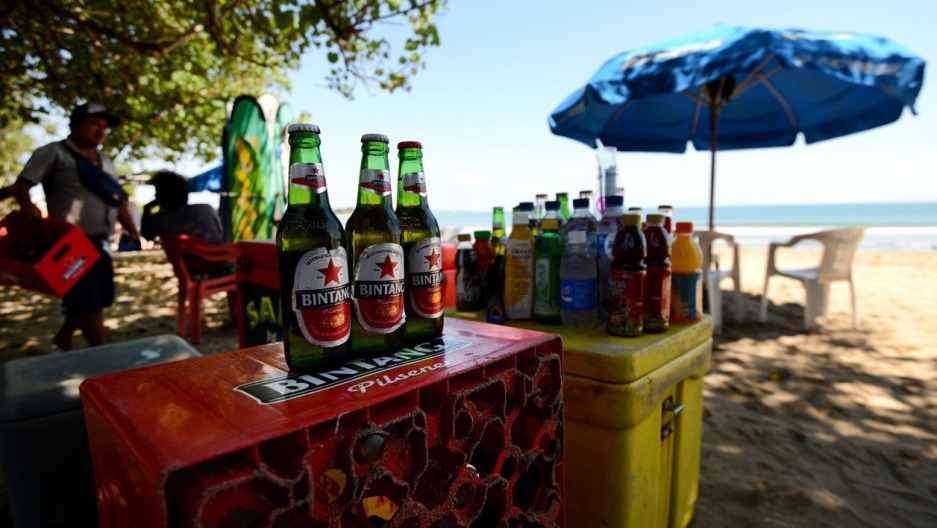 Bottled beer is displayed for sale along Kuta beach on Indonesia's resort island of Bali on April 16, 2015.
Share

At a bar in the Indonesian capital, Christine, Hassan and Dilta look at each other and burst into laugher. “No, they wouldn’t do that,” they agree. The three of them are drinking Bintang, the ubiquitous local beer that is to some a national icon.

They haven’t heard of the proposed nationwide ban on alcohol, which the parliament has agreed to examine. But they say there is no way it could pass. It’s not the first time small conservative parties have pushed for a full ban on alcohol in this Muslim majority country, and previous attempts have always failed.

But Christine and her friends still look worried. After all, Indonesia did just ban alcohol sales in mini-markets and convenience stores. “It’s so weird not to be able to buy alcohol everywhere anymore, we have to go to bars much more often,” Christine said.

While new regulations in Indonesia often take time to be implemented, and even longer to be enforced, the ban on the sale of alcohol at mini-markets has taken hold almost seamlessly. In Jakarta, beer and other alcoholic drinks have entirely disappeared from the shelves.

Alcohol is still available in large supermarkets, hotels, bars and clubs, but the new law would ban the production, distribution, sale and consumption of alcoholic drinks altogether, and across the country. Offenders could face up to two years in jail.

Two Islamic parties submitted the draft bill, but those behind it say they’re more concerned by the people’s health than religious standards. A section of the proposed bill explains, without including a source, that alcohol is responsible for 58 percent of all crimes in the country.

The sudden focus on alcohol has come out of nowhere. Indonesians are not big drinkers. True, beer sales have increased by 54 percent over the past decade, but Indonesians are still among the lowest consumers of alcohol per capita in Southeast Asia. The World Health Organization says more than 90 percent of Indonesians abstain from drinking alcohol.

And with the exception of some extremists groups, the consumption of alcohol by everyone else has largely been tolerated. Beer has long been available pretty much everywhere. Major cities have seen new bars and clubs open in recent years. The nightlife in Jakarta at this point rivals any world-class city. Mini-markets like 7-11 and Circle K (before the ban) had transformed themselves into open-air cafes where anyone can come, buy a can of beer out of the fridge, and drink it at the store.

Indonesian Trade Minister Rachmat Gobel, who is behind the mini-market ban, said the country needs to “protect our younger generation.” According to him, more and more people are complaining about alcohol being increasingly available in their community. The move, he says, was necessary to crackdown on underage drinking. “Alcohol can damage their morality. There are already signs they no longer respect their parents,” he said.

The country’s child protection commission has also backed the full alcohol ban proposal, arguing it is “time for the government to be decisive and to take action to protect Indonesian children from drugs and alcohol abuse,” as the commission’s director, Asrorun Ni’am Sholeh, put it.

“Protecting the youth” has been high on Indonesian President Joko Widodo’s agenda, alongside a hard stance against drugs, demonstrated by the country’s recent execution of foreign drug smugglers, despite international condemnation.

Not everyone, however, is so concerned about alcohol's impact on Indonesia's young people. Jakarta Governor Basuki Tjahaja Purnama, for his part, has no problem with it.

“What’s wrong with beer? Has anybody died from drinking beer? People die from drinking tainted alcohol,” he said, touching on one of the most serious repercussions of banning alcohol entirely.

The governor has argued that the ban would encourage the illegal — and potentially deadly — sales of moonshine. He’s not alone.

The Indonesia Food and Beverage Association warned of a “proliferation of bootleg liquor production” if a nationwide ban is passed. “This is more alarming as there won’t be any health and safety standards put in place. How can the government control that?” the association’s deputy chairman, Sribugo Suratmo, said.

Although there are few national statistics, reports of people dying after drinking homemade liquor containing methanol are common. High taxes on alcohol in the country have already led to unscrupulous producers mixing lethal concoctions. Last December more than thirty people died and dozens more were hospitalized in separate incidents after drinking bootleg alcohol.

Sitting a few tables away from Christine and her friends is Agi, 27, also drinking Bintang. He too believes banning alcohol all together would be “dangerous."

“People are not going to stop drinking alcohol, they’ll just make their own,” he said.

Agi’s friend Ica, 26, argues that alcohol is “part of our culture.” Natural local brews like rice and palm wines are popular in many parts of the country.

While the proposed ban on alcohol would exempt five-star hotels and major resort areas like Bali, many worry strong alcohol restrictions will damage tourism.

When the trade minister defended his mini-market ban, though, he was adamant the number of tourists visiting Indonesia won’t be affected. “They don’t come here to consume alcoholic drinks but because they want to see the natural beauty of our country and our culture,” he argued before the ban took effect. Since then, he seems to have realized that booze might actually be part of what tourists expect from Bali, and there are suggestions the island might soon be made exempt from the mini-market ban.

As for the rest of Indonesia, well, Christine and Hassan will continue going to bars, and would rather not think about a possible future without alcohol right now. Their friend Dilta, though, already has a back-up plan:

“I will move to Paris, or Zimbabwe,” she laughs. “I like beer too much.”