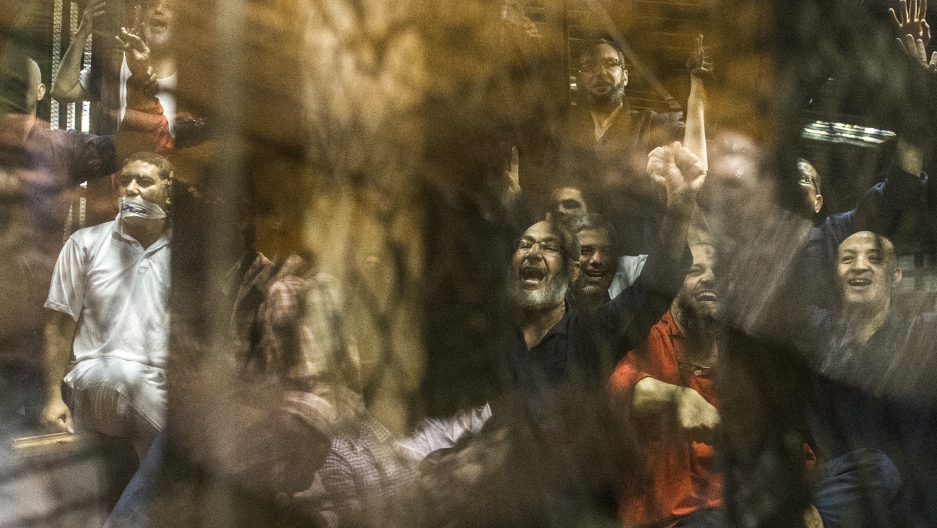 The Muslim Brotherhood's Safwat Hegazy (C) shouts from behind the defendants' cage as a judge reads out the verdict sentencing him and more than 100 other defendants to death on May 16, 2015 at the police academy in Cairo.
Credit: KHALED DESOUKI/AFP
Share

CAIRO, Egypt — Next Tuesday, a lawyer will plead for a Cairo court to suspend the execution of six men, arguing that their death sentences were unconstitutional. The only trouble is, the defendants are already dead.

Since the coup that swept Muslim Brotherhood President Mohamed Morsi from power, hundreds of his supporters have been handed death sentences in a rash of mass trials. But until this month, only one had been carried out — against a man convicted of throwing another man off a roof.

A little over a week ago, however, six men sentenced to death by a military court were executed on charges of belonging to militant group Ansar Beit al-Maqdis and attacking security forces.

The day before, a Cairo court sentenced ousted president Morsi and 120 others to death on charges related to a mass prison break during the 2011 uprisings. Some were sentenced in absentia, including Sondos Asem, a young Oxford University student who used to work as a media coordinator for Morsi, and Emad Shahin, a well-known professor at the American University in Cairo.

A key question now being debated: Will they really kill Morsi?

More from GlobalPost: Hear from Egypt’s young revolutionaries behind bars

The precedent set by the court-ordered killings is already worrying monitors. “Now that they have been executed this paves the way for other executions to take place,” said Mohamed Elmessiry, Egypt researcher with Amnesty International.

“It is a sign that some parts of the state are in a very bloody-minded mood; at times it seems as if there is a vendetta between parts of the state and an increasingly militant opposition," said Nathan Brown, professor of political science and international affairs at George Washington University.

In this case it appears that a serious miscarriage of justice took place, according to lawyers. Three of the six convicted men have an alibi — they were already in prison on the dates they allegedly carried out their attacks on the army. Ahmed Helmy, a lawyer who represented the men, said the court seemed unwilling to listen to the evidence. “The judge was shown official documents that proved that they were arrested before the crimes allegedly took place,” he said. The documents included “times and places of arrest and the fact that they were in Azouli prison,” a military detention facility known for human rights abuses.

Helmy said the outcome of the trial seemed like a foregone conclusion from the start.

“There is a sense that the sentences were already decided. The defendants told me not to bother [defending them]. They said, ‘We know we will get the death penalty, don’t trouble yourself.’ They knew this would happen,” he said.

More from GlobalPost: An entire city is going to be wiped off the map in Egypt

The whole trial was flawed, rights groups say. Elmessiry describes the proceedings as “procedurally completely null and void because they were held in enforced disappearance [not official detention] and they were not held in an official place of detention.” The civilian defendants were also tried in a military court. The administrative case on June 2 will challenge the sentences on these grounds.

Helmy sees the executions as a warning to those still in jail.

“It was a kind of threat — they will apply this sentence to scare the other prisoners into negotiating with them and solving the crisis.”

What do Egypt’s friends have to say?

The United States gave a milquetoast response to Morsi's death sentence, saying they were “deeply concerned” — a sentiment that didn’t get in the way of a meeting in Cairo last Wednesday between General Lloyd James Austin, the head of US Central Command, and Sisi. The presidency said the two men were talking about counterterrorism efforts.

“I think Western actors — the Europeans and the US — have essentially come to terms with the fact that the new Egyptian regime is following a repressive path,” said Brown. He added that it is unlikely to pose a serious barrier to relations.

But if politically motivated death sentences continue — and particularly, if Morsi does end up being executed — the US and other Western governments who have supported the Sisi government will have some explaining to do.

“If the Egyptian government actually executed all those who have death sentences passed on them, the bloodletting would be hard to ignore. I think it would lead to a bit of international isolation,” Brown said. “If instead we see selected executions it will lead to more tension in their relationship but will not completely disrupt it.”

Already, Egypt’s increasingly poor record on human rights is causing Cairo to lose friends in some European capitals. The president of the German parliament canceled a June meeting with Sisi, citing “human rights abuses and lack of parliamentary elections in Egypt.” Egypt, meanwhile, denied that it had requested a meeting in the first place.

“What we've seen from the West is disappointing but expected,” said Sarah Leah Whitson, head of the Middle East division at Human Rights Watch. The Obama administration “has routinely set aside the rights of Egyptian citizens in favor of its so-called strategic interests in Egypt,” she said.

That doesn’t mean US officials aren’t keeping an eye on the Egyptian judiciary, however.

“I think a lot of diplomats are waiting to see whether the Court of Cassation [the final line of legal appeal] continues to function as a pressure valve or whether it begins finalizing the hundreds of preliminary death sentences currently before it,” Whitson said.

Helmy said it is too soon to tell what will happen in those cases. But he doesn’t think the former president will actually be executed.

“I don’t expect they will carry out Morsi’s sentence. They want to negotiate with the Muslim Brotherhood and they don’t need to kill him now,” he said.

What will happen in Egypt’s courts is increasingly difficult to predict. Under former president Hosni Mubarak there were sometimes faulty sentences, but usually not in cases carrying the death penalty, Helmy said.

“Now you have the feeling that the whole system is lost, that the sentences comes from above and are already decided.”