The Scripps National Spelling Bee plays out this week and while you may be excitedly watching the best spellers in the US battle it out in Maryland, halfway around the world in China, Beijing's kids are competing for a different kind of title: China’s Best English Speaker.

The Star of Outlook English Competition, sponsored by CCTV, the Chinese State television network, is the largest English competition in the country and, ostensibly, the world. 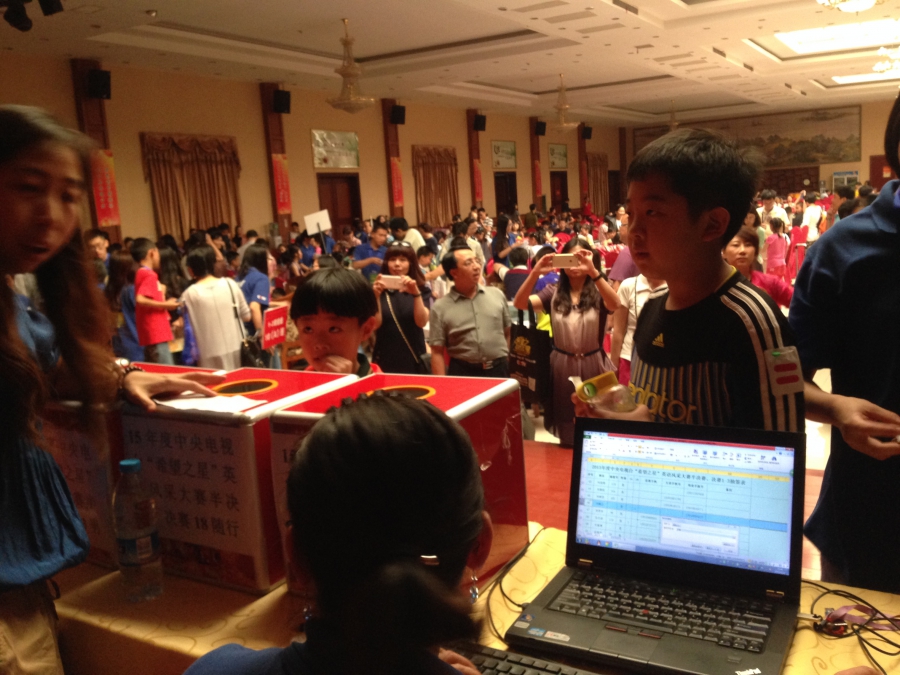 A sea of parents eagerly await to see when their child will perform. Cameras galore.
Credit:

Hundreds of first through third graders, middle school and high school students gathered at a compound an hour outside of Beijing in the hopes of winning a place to compete at the National Championship this summer. They’re up against a mere 5 million of their peers from around China.

Getting to the national finals, which is televised in front of a huge audience, is an almost Herculean feat involving round after round of exhausting, multi-day tests.  But winning means fame, entrance to a good college, a bright future. That’s how former national finalist Michelle Cui explained it to me.

“Such exposure on TV if you make it to the national final and all the things that comes with it will look so good on your track record and CCTV is the deal. ... It’s really the maximum exposure an individual can get,” Cui said.

Today, Cui works in advertising and lives in Seattle. All of her fellow competitors have gone on to do interesting things: Host TV shows, write books, one even became the CCTV White House correspondent. 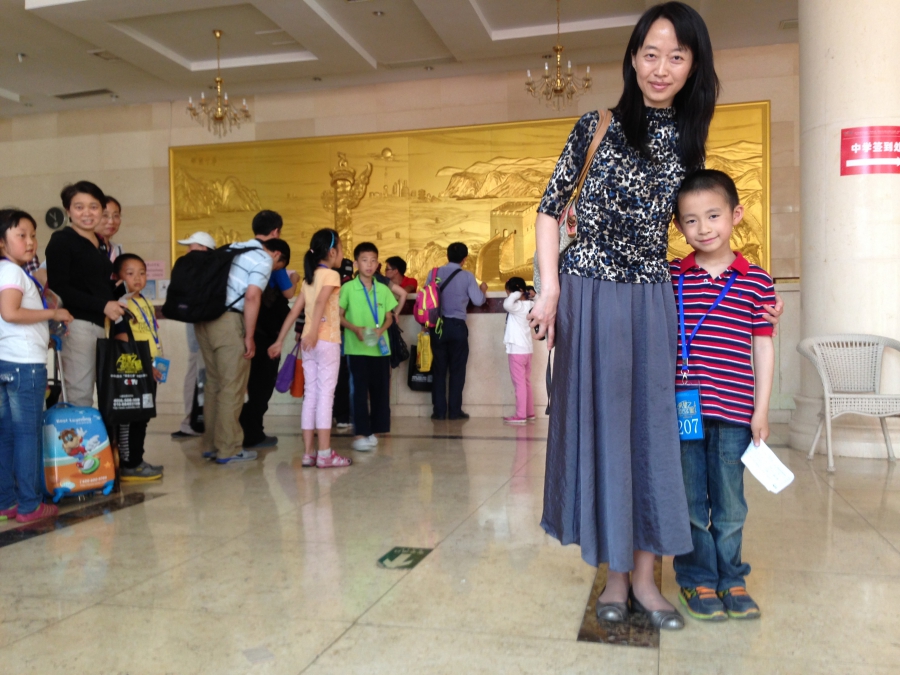 Jack, 7, and his mom at registration.  They lived for a few years in Washington, DC.  Jack remembers that he liked "Capitol Hill" the best.  That, and picnics.  Jack's will perform his favorite song for the talent competition, "Supercalifragilisticexpialidocious."

The kids I met this weekend want to win. Perhaps their parents want it even more.

Jack is fairly typical of the Beijing kids I met. They’ve lived abroad, traveled extensively; they’re part of a rising, affluent middle class. Jack lived in Washington, DC, as a toddler.  His mother worked at the Chinese Embassy.

He studied English at a very young age, his mother told me. The golden age is two or three, she says, the same age that native speakers learn.

“I want him to be an ambassador between the two countries and around the world,” she says. 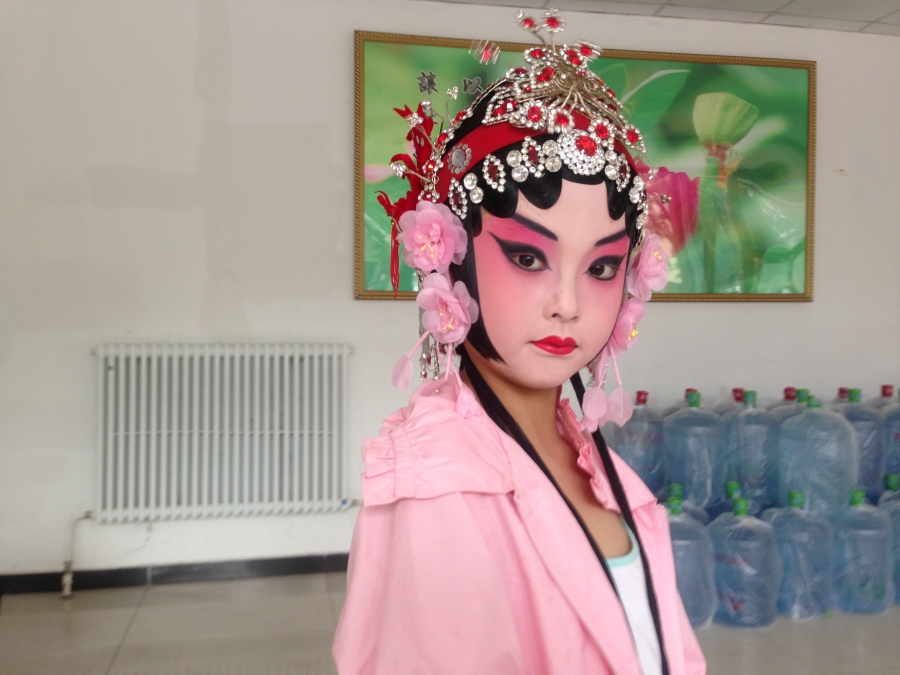 Some of the costumes and props were incredible. This little girl is dressed up as Beijing opera performer. The theme of the speech portion of the competition was "I Express China to the World."  Beijing opera was a pretty popular topic as you might imagine.

There are many, many parents with high expectations and blind, or perhaps deaf, love. After witnessing the talent portion of the competition, it's clear the kids can speak much better than sing English.

But their talents weren’t limited to songs. Contestants had just one minute to show off any way they chose. There were magic tricks, flute performances, one salsa dancer, a couple of Rubix Cube experts, a hockey skater. By dinnertime Saturday night, one of the judges, Hester Veldman, looked bleary eyed. 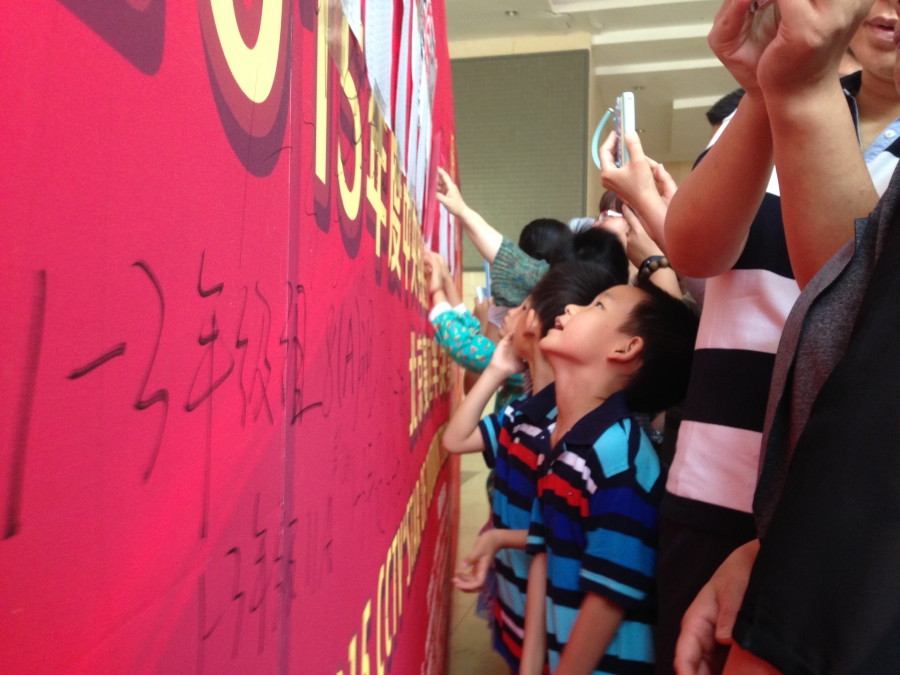 Kids and parents crowd around to see the list of finalists. Out of more than 400 kids that competed in the Beijing semifinals, only 80 move on the final round and only 9 from each division will move forward to the National semifinals.

Veldman’s originally from the Netherlands, but she’s been teaching English in Beijing for the past year. This is her first time judging this kind of competition.

“The parents are really serious about it. I saw a dad who was actually commanding his son to move this way and stand that way and don’t do this and speak louder. They’re used to that pressure. They’re used to it from being in kindergarten all the way to now. So, to them, it might feel like summer cam,p but with our western eyes we think ‘Wow that’s a lot of pressure to put on a kid.’” 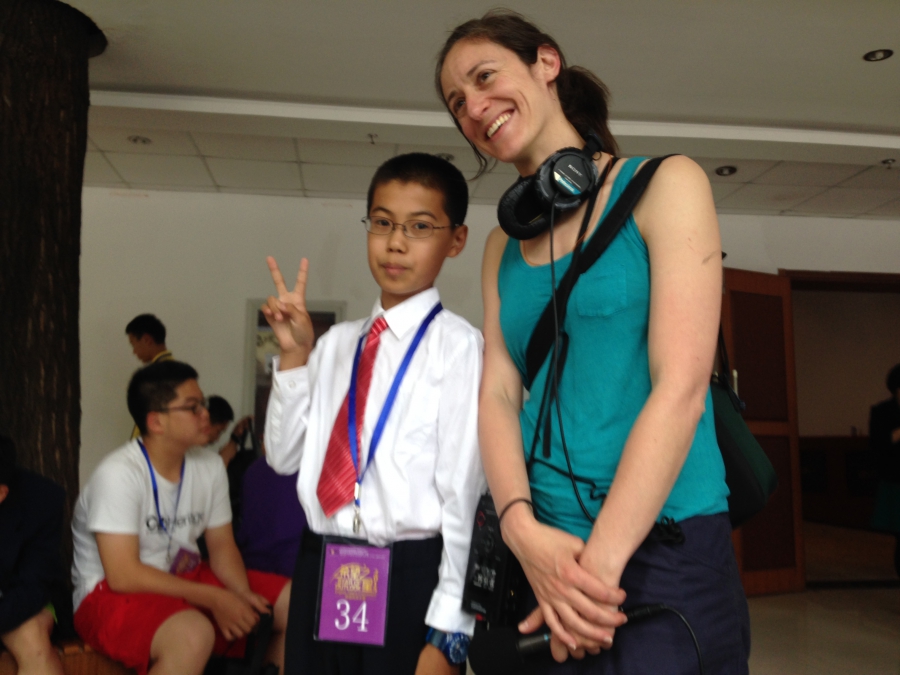 "Harry" Xing Wang dressed up to take the stage as Obama circa 2008.

And then there are kids like Xing Wang, who calls himself Harry.

Harry’s tiny, with glasses. He looks about 11, but he’s 13. Whatever he lacks in size he makes up double in confidence. Harry’s never lived abroad. His parents don’t speak English. They moved from Inner Mongolia to Beijing five years ago. Harry started learning English in the third grade, which is relatively late. Beijingers start in the first grade. But while Harry’s English isn’t the best, he is teeming with ideas. He tugs at my sleeve in anticipation of telling me his talent, which he eventually does.

“Today I’m going to study a part of Obama’s speech. His speech he said in Chicago. Maybe it’s the first time he became president,” he tells me.

Sure enough, Harry takes to the CCTV stage in a red tie and dress slacks and delivers Obama’s 2008 acceptance speech. He came up with this talent idea himself, he tells me.  He’s a big Obama fan and he figures, many of the judges would probably be Americans, so this speech would surely make them feel patriotic and surely get him a high score.  Clever kid.

Harry performs Obama’s speech to great applause. One judge calls out, “you should run for president.” Harry bows thank you and runs off stage. He is beaming. I whisper a question. 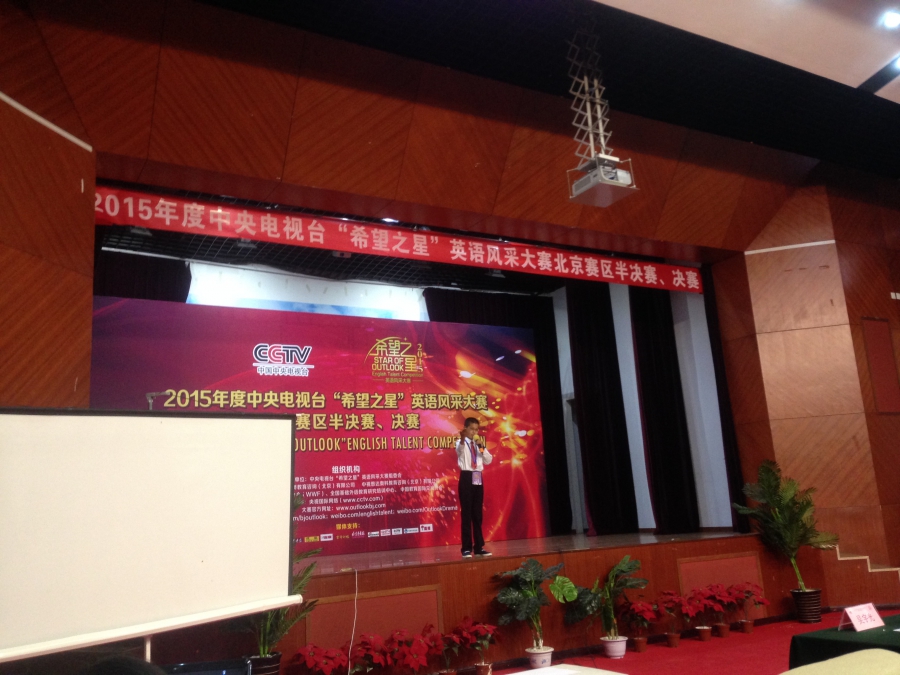 Outside we speak a little about his feelings for his own president, Xi Jinping — or Chairman Xi as Harry calls him.

“You know Chairman Xi, he is trying to do something called Chinese dream,” he tells me.

President Xi’s Chinese dream, he says, is to help China rise again, to become an important and powerful nation.

“So what’s your Chinese dream?” I ask him.

“I’m going to do my best to help my country grow up.”

Harry may think his country may be in need of growing up, but he himself appears to be doing just fine. He finds out he’s survived the Beijing semifinal and final round. He’ll be headed to the National Semifinals in June — just one round away from the big televised event. 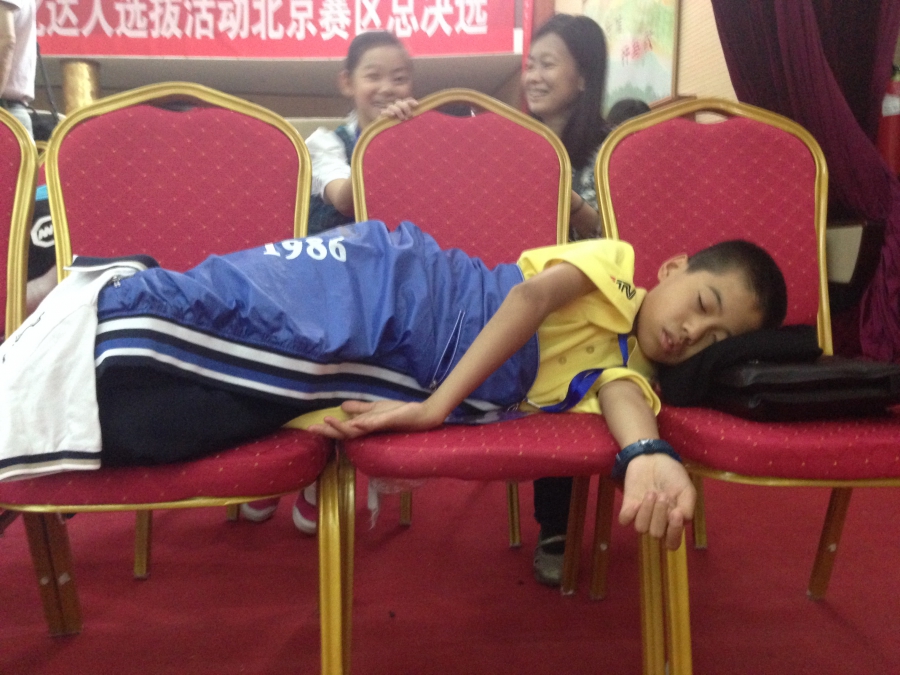 Harry passed out after a grueling weekend.

When I went to wish Harry good luck, I found him passed out, asleep in the back of the auditorium. He doesn’t need my luck anyway. He already told me he’s confident he’ll make it all the way to the TV. I wonder if he’ll give an encore performance of Obama’s speech on CCTV.