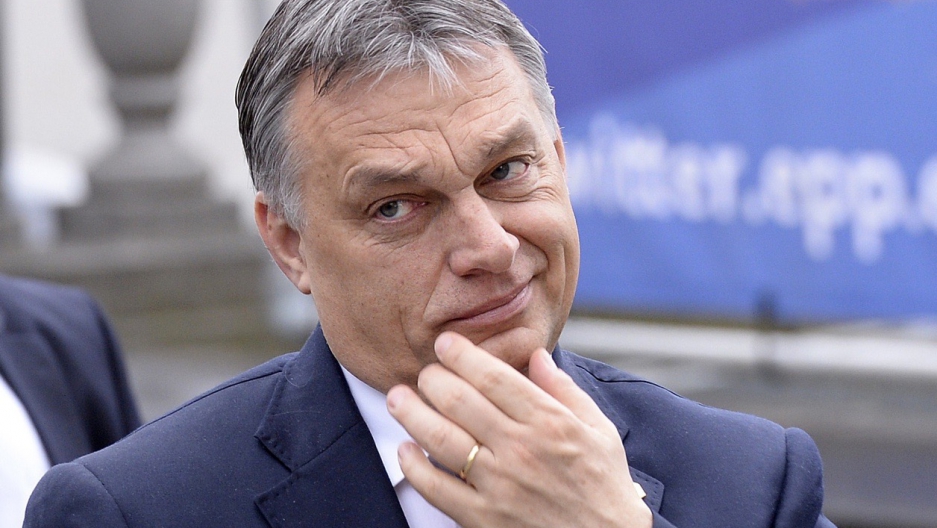 BUDAPEST, Hungary — Signs that Budapest is being swamped by immigrants aren't that easy to find.

There's a scattering of Chinese-run discount stores and an upscale Syrian cafe a couple of blocks from the Danube where besuited Middle Eastern businessmen sip cardamon-scented coffee with their baklava.

You see the occasional black or brown face in the street, but they seem more likely to be French tourists or American exchange students than impoverished migrants flocking from Africa and Asia to abuse Hungary's benefit system.

Yet this lack of actual immigrants hasn't stopped Prime Minister Viktor Orban from embarking on a crusade against immigration that has alarmed rights campaigners and earned him condemnation from politicians around Europe.

“We Hungarians would like to keep Europe for the Europeans and we also wish to keep Hungary as a Hungarian country,” Orban said last week, answering critics in the European Parliament. “We are unable to offer jobs to immigrants.”

European Union proposals for all member countries to house a share of the migrants now trying to cross the Mediterranean in flimsy boats are "absurd, bordering on the insane," he said — even though the plan suggests Hungary would only get slight more than 300 of them.

Framing immigration in the context of terrorism, depicting migrants as a threat to jobs and the livelihood of people, is malicious and simply wrong

Instead, Orban's government has launched a “public consultation” to help it shape a tougher immigration policy and redress the EU's “failure.”

At a cost of about $3.6 million, the prime minister has written to all voters seeking their advice and pledging his conservative government “shall not allow economic migrants to jeopardize the jobs and livelihoods of Hungarians.”

The questionnaire has triggered a storm of criticism, most notably by directly linking immigration with terrorism. Incidentally, Hungary's only terrorist attacks in recent years involved fatal attacks by an extreme-right group on the country's Roma community.

“Framing immigration in the context of terrorism, depicting migrants as a threat to jobs and the livelihood of people, is malicious and simply wrong,” European Commission Vice President Frans Timmermans said Monday. “It will only feed misconceptions and prejudice.”

Hungary has one of the EU's smallest immigrant communities. Just 4.3 percent of Hungary's population is foreign-born — roughly a quarter of levels in countries like Sweden, Belgium or Austria.

And the majority of migrants in Hungary are ethnic Hungarians who hopped over the border from Romania, Serbia, Ukraine and other neighboring countries.

More from GlobalPost: The scary return of a radical, far-right Europe

“There are hardly any visible foreign-born minorities in Hungary,” says Marta Pardavi, co-chair of the Hungarian Helsinki Committee, a human rights watchdog.

“Your average Hungarian has no real contact with foreigners,” she said during an interview in the group's downtown office. “There's a fear of the unknown which is very prevalent. Polling companies show xenophobia is very high in Hungary.”

Hungary has seen a sharp rise in numbers of asylum-seekers entering the country, but they don’t stay long.

The figure more than doubled in 2014 to 42,000 and is on course to double again this year. Many are from Kosovo. Others are fleeing conflicts in Syria, Afghanistan and Iraq. They are smuggled through the Balkans and cross Hungary's southern border with Serbia.

The vast majority is headed to Germany and other more prosperous countries to the west.

"Hungary is a transit country," says Marta Demeter, a lawmaker with the opposition Socialist Party. "This is not the last stop. Last year just 500 people stayed."

Demeter says Orban is seeking to whip up support with his tough line on immigrants to bolster his conservative Fidesz party whose poll ratings have plummeted since it was re-elected with a majority a year ago.

"The government has less and less support, so they are trying to use immigration as a political instrument," she told GlobalPost. "The goal of this questionnaire is just to keep them in power and give people a distraction from Fidesz corruption cases."

This is not the first time Orban has roiled Hungary's allies.

He openly wants to create an "illiberal state" and since coming to power in 2010 Orban has been accused of perusing a creeping authoritarian agenda by stuffing the judiciary with allies; attempting to muzzle media, civil society and the internet; and failing to tackle corruption.

Cozying up to Russian President Vladimir Putin has not helped his popularity in Washington or Brussels.

Western leaders might have taken some comfort from Orban's sliding popularity, were it not that the alternative looks even less appealing.

Jobbik's views are so toxic that even radical nationalist parties in Western Europe, like France’s National Front, or the Dutch Freedom Party, shun it.

In an attempt to win over mainstream voters, the group recently sought to tone-down some of its Jew- and Roma-baiting rhetoric. Its paramilitary wing — the Hungarian Guard — whose parades and uniforms drew comparisons to Nazi-era militias was disbanded by court order in 2009.

Many Hungarians are profoundly alarmed by Jobbik's rising support.

The party's newest lawmaker Lajos Rig won a partial election in Western Hungary last month despite media revelations that he'd shared a Facebook post that described the Roma as "the Jews' biological weapon against Hungarians" and that he has a tattoo of the words "Loyalty and Honor" — recalling a motto of Hitler's SS.

"Jobbik is the strongest party among young people, and that's very frightening," says Pardavi, the human rights campaigner. "A very significant part of it comes from a disillusionment with the government, current and previous, and the high level of corruption."

Orban's anti-immigration campaign, confrontational approach to the EU and recent comments about restoring the death penalty are all seen as attempts to guard his right-wing vote base against Jobbik.

Hungarian democrats see a sad irony that the country that played a leading role in restoring central and eastern Europe to democracy during the revolts against Soviet rule in 1989 now has its own basic rights under threat.

"Among the NGO community there is a very heightened sense of anxiety," says Pardavi, whose organization has its roots in the struggle for human rights during Communist rule.

"The stories we heard from our older members and founders are now coming back," she adds. "We have to reach back to the tactics of the 1980s, which is ridiculous in the EU in 2015 — but it's reality."