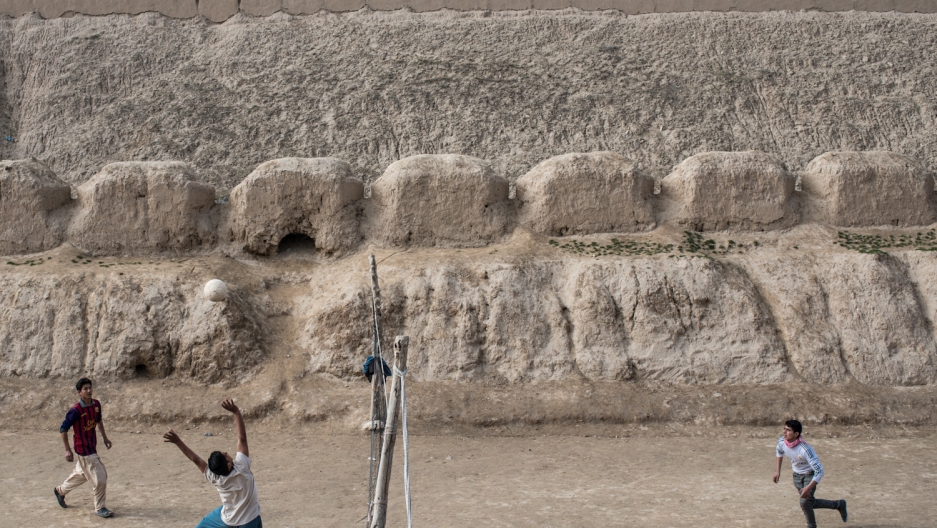 MAZAR-I-SHARIF, Afghanistan — Among the weeds of an overgrown courtyard inside the walls of a fortress, there is a monument made of black marble dedicated to Johnny “Mike” Spann, the first American killed in what would become America’s longest war.

Spann, 32, a former Marine who served with the CIA, was killed on Nov. 25, 2001 while processing and interrogating a group of nearly 600 Taliban prisoners who negotiated a surrender and then plotted an uprising during which Spann was shot twice in the head.

The uprising was one of the most dramatic battles of the long war in Afghanistan and it took place within the 30-foot-thick, mud-brick walls of a 19th-century fortress known as Qala-i-Jangi, which means "House of War.”

Now the Taliban military commander that many believe is responsible for the events that led to Spann’s death is free and there are some who fear he could be poised to return to the battle in Afghanistan, according to members of the US Congress, Afghan government officials and Spann’s own father. The US State Department says it is working to prevent that from happening and, as one US official put it, “It is in no one’s interest to have the bad guys out there returning to the fight.”

The Taliban military commander, Mullah Mohammad Fazl, was released from Guantanamo last year as one of five top Taliban officials exchanged for the freedom of US Army Sgt. Bowe Bergdahl.

Bergdahl walked off his post in 2009 and was held captive for five years by the Haqqani network. He was released on May 31, 2014, the same day Fazl and four other Taliban leaders gained their freedom.

Under the terms of a deal worked out between the United States and the Taliban, Fazl and the group were transported to Qatar where, all were banned from leaving the country for one year.

But that one-year travel ban is about to expire and there are many in Afghanistan and throughout the ranks of the US military and intelligence community who fear Fazl will return to battle and who question the judgment in Washington that led to his release.

Fazl was the deputy minister of defense in the Taliban and commanded some 3,000 front-line troops in northern Afghanistan just after 9/11. Among those under his command were the nearly 600 Taliban fighters, most of them foreign militants from neighboring Uzbekistan, Tajikistan and Pakistan, who carried out the uprising in the fortress. Military and congressional reports and documents chronicling interrogations of Fazl and other Taliban leaders suggest the uprising was a “Trojan Horse,” as it was described in a US Senate Committee on Foreign Relations report in November 2009.

In other words, a planned strategy to feign surrender and then overtake a weapons depot in the fortress and retake control of the area from the first few American forces to arrive inside Afghanistan and their Afghan Northern Alliance allies.

Fazl was at the fortress in the days before the uprising as part of a negotiated surrender to the Northern Alliance. After the prisoners rebelled, Fazl was brought back to the fortress and arrested soon after as an armed combatant. He was eventually taken to the US military detention center at Guantanamo Bay, Cuba.

A Department of Defense memorandum titled “Combatant Status Review” dated Feb. 23, 2008 states, “If released, detainee would likely rejoin the Taliban and establish ties with anti-Coalition militias (ACM) participating in hostilities against US and coalition forces in Afghanistan.”

It indicates Fazl accumulated considerable financial resources and worked closely with the Islamic Movement of Uzbekistan as well as the Haqqani network.

According to research by the Afghanistan Justice Project, Fazl was also responsible for summary executions of civilians suspected of opposing the Taliban, of indiscriminate destruction of homes and the forced displacement of civilians which led to an exodus of some 300,000 people from the area of Shomali.

Concern about the release of Fazl and the four other Taliban leaders has persisted among Afghan and American leadership alike.

The Afghan government was furious over the secret talks and felt sidelined by the release of the Taliban leaders. A statement from the Afghan Ministry of Foreign Affairs said that the transfer of the prisoners was “contrary to international law.”

Among the most strident voices in the US has been Arizona Sen. John McCain, a former prisoner of war in Vietnam, who at the time of the prisoner exchange blasted the release of “hardened terrorists who have the blood of Americans and countless Afghans on their hands.”

McCain has been persistent about steps needed to “ensure that violent Taliban extremists never return to the fight against the United States or our Afghan partners.”

There remains mounting pressure within US Congress for the State Department to ensure that Qatar extends the travel ban for the five Taliban leaders and that active surveillance remain in place that will keep them out of Afghanistan.

A State Department official, asked about how the US was monitoring Fazl and whether the US was working with the Qatari government to ensure that he did not return to Afghanistan, said, “Things are under discussion.”

The release of the Taliban leaders in exchange for Bergdahl has been described by the State Department within a framework of potential negotiations for peace talks with the Taliban.

The State Department official said, “We strongly support the Afghan government’s prioritization of peace and reconciliation efforts and an Afghan led and Afghan owned peace effort as the surest way to end violence and ensure lasting stability in Afghanistan and the region.”

On this Memorial Day, Mike Spann’s father Johnny said he will be in the den of his Alabama home looking up at the wall of pictures of his son. There are pictures from Little League, high school football and the younger Spann in his Marine dress blues. Johnny Spann, 66, said he’ll hold the American flag carefully folded into a triangle that was draped over the casket before his son’s burial in Arlington Cemetery.

“Every Memorial Day, I just spend it quietly with my family. We reminisce about Mike’s life. And we think about all of those who have sacrificed their life for the country,” said Spann, a real estate agent in the small town of Winfield, Alabama.

Spann said he’ll be thinking about what he would like to say to President Barack Obama, and all the rest of the Washington power brokers — Republican and Democrat — who he holds responsible for releasing Fazl.

The senior Spann has read countless pages of interrogations of prisoners and field reports on the events that led to the killing of his son back in November 2001 and in his mind there is no question that Fazl bears responsibility as a leader of the men who carried out the uprising. He was shocked at his release to Qatar and now deeply concerned that the travel ban may end, opening the possibility that Fazl would return to Afghanistan and rejoin the fight against the US.

Johnny Spann said, “I’d like to ask President Obama how he could release this man, and then not even keep a close eye on him in Qatar? How could he possibly think this was the right thing to do? It’s like slapping the face of our family all of the families of those who have sacrificed so much for the country. I just don’t understand how this is happening.”

This article is part of The GroundTruth Project's "Special Report" titled "Foreverstan: Afghanistan and the road to ending America's longest war." You can view the full project, produced in partnership with WGBH Digital, with more written dispatches, video and photography at www.foreverstan.com. This project was made possible through support from The Ford Foundation.