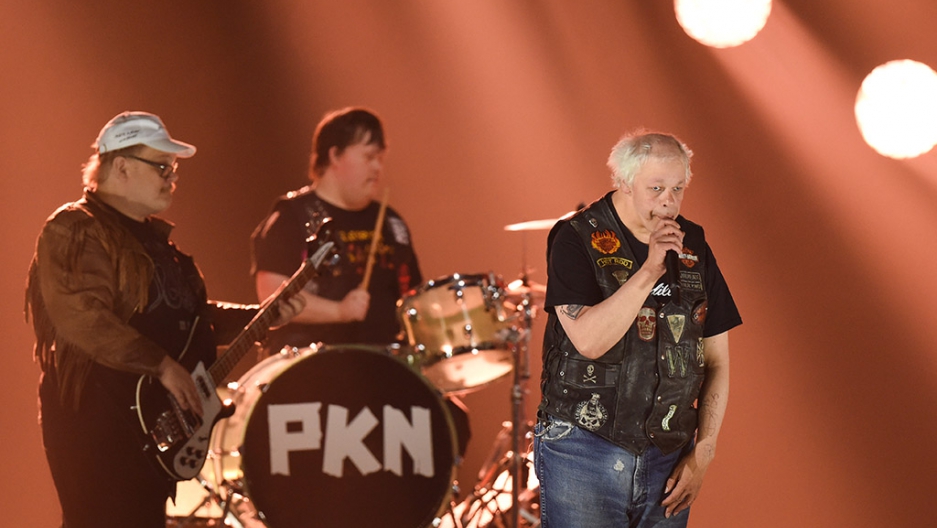 Pertti Kurikan Nimipaivat of Finnland performs during a rehearsal of the first Semin Final on May 18, 2015 in Vienna, Austria. The final of the Eurovision Song Contest 2015 will take place on May 23, 2015.
Credit: Nigel Treblin
Share

HELSINKI, Finland — It’s just a punk band like any other, but also one of a kind.

Meet Finland's Pertti Kurikan Nimipaivat, or PKN. They swear, drink, and shout about society, police, and just about everything. But they also demand respect for the mentally disabled — because they themselves are.

The band represented Finland at the Eurovision Song Contest in Vienna, in which 40 countries' contestants square off for fame and fortune. They were eliminated early. But no matter. These guys wouldn't be the first to use Europe’s crazy popular talent show as a springboard for international stardom (ABBA, Celine Dion... wink wink).

The four middle-aged men in PKN have Down syndrome, Williams syndrome and other intellectual disabilities. They’ve built a solid fan base in the Finnish punk scene and have toured as far as Austin’s South by Southwest festival in 2013.

But they're not just loved by punks. The Finnish public overwhelmingly voted for PKN to represent their country at Eurovision.

They won the national qualification with a crude, 1.5-minute punk song. It was not a musical masterpiece. This is their video (lyrics in English here):

But the band had punk credibility and a heart-warming backstory, made famous by a 2012 documentary, "The Punk Syndrome." The film follows the band’s performances in shabby rock clubs in Finland and elsewhere in Europe.

It was an innovative Finnish educational technique that helped a punk band overcome mental disabilities to compete in the wonderfully wacky contest this year. Finland's “figure notes” system helps people with learning difficulties to play music. Developed in the Resonaari Special Music Center in Helsinki in the 1990s, where three PKN members practiced playing for about 10 years, the system has revolutionized special education in Finland, according to its developer, music therapist Kaarlo Uusitalo.

“Twenty years ago in Finland, people with intellectual disabilities didn’t have any reasonable way of learning to play,” Uusitalo says. “They had great difficulties in understanding things, great motor difficulties and big problems in remembering things — none of the traditional teaching methods worked. Now Finland has about 1,000 people with intellectual disabilities who are learning to play an instrument.”

Figure notes matches colors and shapes attached to piano keys or the frets on the neck of a guitar to similar signs on a music score. Slowly, students using the colors can play and potentially learn to read music. Often, mentally disabled people remember geometric shapes and colors more easily than numbers or letters, researchers say. The system has spread around the world.

More from GlobalPost: Serbia's Eurovision entry is pretty much this year's Conchita Wurst

“Including these different kinds of learners in goal-oriented music teaching and actually believing in their potential — there hasn’t been very much of that before,” says Resonaari’s director, Markku Kaikkonen.

Today, the Resonaari music school organizes two-day concert events where around 20 bands and more than 100 musicians with intellectual disabilities perform.

Music is therapeutic for people with mental disabilities. It can give them a sense of order and achievement, improve their self-esteem and motivate them to learn more in other areas.

Kaikkonen says music is therapeutic for people with mental disabilities. It can give them a sense of order and achievement, improve their self-esteem and motivate them to learn more in other areas of life.

He adds that PNK’s success has also stimulated a cultural shift toward wider acceptance of disabled people. That’s something PKN is already demanding through song.

They sing about things that make them angry. And, apparently, a lot of things do: lying politicians, discrimination against disabled people, and the mundane activities that annoy them about the life in their group home.

PKN is undoubtedly inspiring, but the band members are real punks who don’t try to please everyone. They curse a lot. And they get drunk. And Aalto in particular is wont to give the middle finger to onlookers. It’s everything you'd expect from musicians in the mold of edgy groups like the Sex Pistols, Green Day and the rest of them.

In another aggressive anthem, Aalto bluntly declares: “I hate the parliament. I hate this world.”

In the run-up to Eurovision, the band released a promotional video where the bassist, Sami Helle, wears an eyebrow-raising T-shirt that criticizes police in profane language.

Finland has supported unusual, off-putting acts before. The metal band Lordi, whose members dressed up in monster outfits, won the 2006 contest.

Not everyone was happy about these foul-mouthed punks representing the nation. Many Eurovision fans think PKN doesn’t belong in the campy pop contest that is, in terms of style, the very opposite of punk.

But in the end, PKN won the national qualification with a huge margin, taking over 37 percent of the votes against eight other bands.

When PKN was declared a winner of the national qualification, the band showed some attitude.

“As it happens in life, the best one always wins,” Aalto bragged on stage.

And even without Eurovision, they're making new plans, some unexpected ones. Helle recently announced he wants to run for a seat on the Helsinki City Council in the next municipal elections in 2017. Wouldn’t that be something? Good luck, punk.