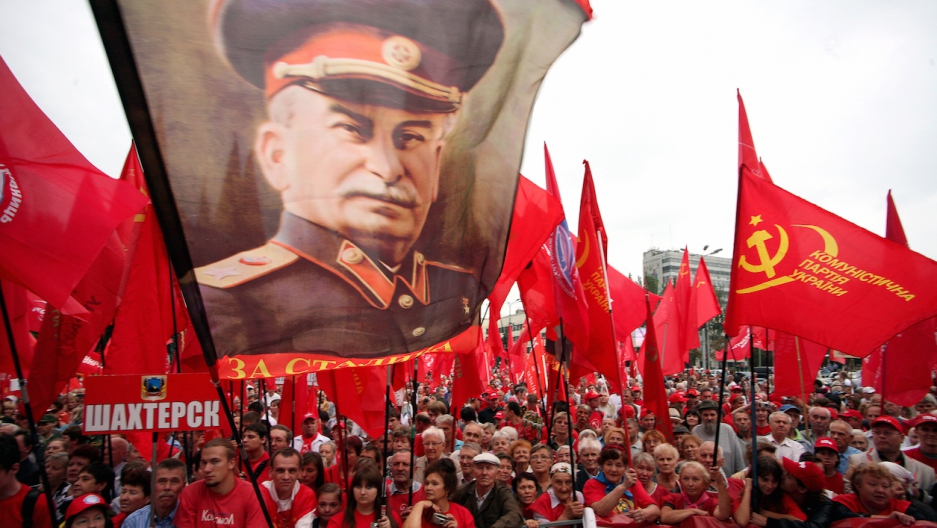 Either way, Ukraine is finally cutting loose from its USSR past with a new law taking effect this week that bans communist symbols and Soviet propaganda. (Here’s the law in Ukrainian.)

The ban applies to Nazism, too, but that part’s been less controversial.

Anyone found breaking the law could face up to five years in prison.

So on the off chance you’re a diehard communist who’s planning a trip to Ukraine, here’s a quick look at what might land you in the slammer. A Communist Party rally at Independence Square in Kyiv in November 2010.

The law bans publicly performing the national anthem of the Soviet Union or any of its 15 republics. Soviet flags are also prohibited — when not in museums or other educational settings, at least — so don’t expect to hold any parades for the proletariat any time soon. A Russian rocked this Stalin T-shirt at the May 9 celebration in Moscow of marking the 70th anniversary of the victory over Nazi Germany.

While popular among some shoppers in the West, the distribution of any clothing featuring the hammer and sickle — T-shirts, sweaters or hats — may now also be off-limits. That’s because the law stretches to cover souvenirs bearing Soviet emblems or the likenesses of Soviet leaders, such as Vladimir Lenin. Time to think of backup plans for your newest small business selling hipster communist apparel (sorry, Banksy fans). A Soviet Red Army military instructor reviews his charges at a military base in Kyiv in October 1991.

According to the new law, it’s illegal to publicly “deny the criminal character” of the Soviet and Nazi regimes. For instance, even if you think Soviet dictator Josef Stalin was an “effective manager” — like a certain present-day Russian strongman is thought to have said — it would be best to keep it to yourself. Don’t go distributing leaflets in the town square.

The law also envisions a virtual overhaul of public spaces across the country, a task that will probably be logistically daunting and hugely expensive. In Ukraine, countless streets, parks, squares and monuments are still named after senior communist officials or Soviet achievements. It also means cartographers and city planners will have their work cut out redrawing local maps. So be patient: While simply getting lost won’t put you behind bars, it may be pretty frustrating if you’re using an old map.