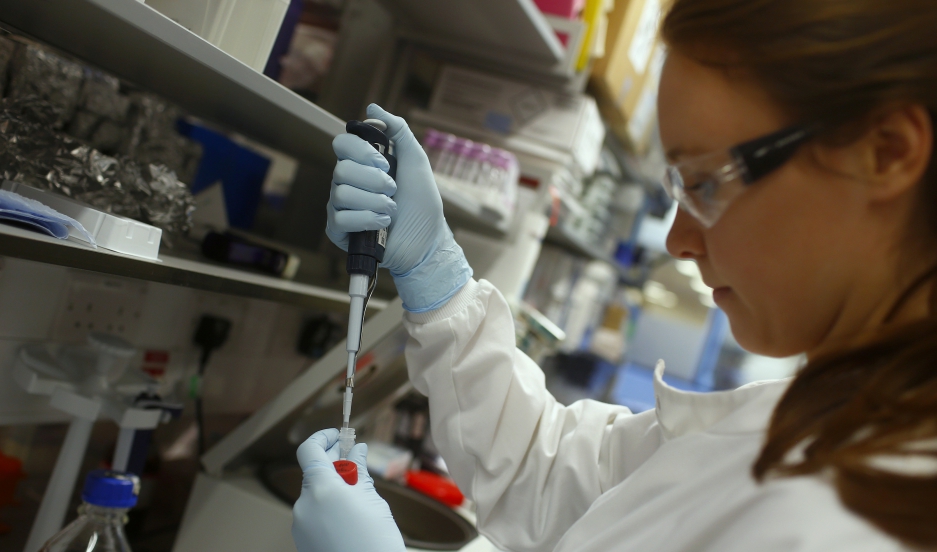 Research assistant Georgina Bowyer works on a vaccine for Ebola at the Jenner Institute in Oxford, England, on January 16, 2015.

In a recent interview, male astronomer Shrinivas Kulkarni said that many scientists are just "boys with toys." So women in STEM fields took to Twitter to prove him wrong.

Using the hashtag #GirlsWithToys, female scientists and engineers posted over 17,000 images of themselves at work, surrounded by the “toys” they use every day — everything from space shuttles and telescopes to robots and microscopes.

“‘Boys with toys’ sounds great, and there are lots of boys with lots of great toys,” says Dawn Sumner, chair of the earth and planetary sciences department at the University of California. “But as a woman scientist and someone who really encourages women to go into science and engineering, there are also girls with toys. We are just as excited as anyone else to play with these amazing tools.”

And Sumner has definitely earned her own spot within the #GirlsWithToys movement. "My favorite toy is a giant rover on Mars,” she says. “I help decide what it does, where to go, and what to do — it’s the Curiosity Rover."

#GirlsWithToys Me at JPL with the engineering twin of the @MarsCuriosity rover, which I help drive on Mars pic.twitter.com/qgCu17m3sC

When it comes to the hashtag, Sumner says #GirlsWithToys represents something bigger within the STEM world.

“Science and engineering have traditionally been dominated by men, so our vocabulary and the way we think of those [positions] often default to a man,” she says. “But in the entire history of science there have been women involved. Now with our society changing, we really need more women and more people who don’t fit that scientist stereotype to come up with creative solutions to society’s problems."

Though the #GirlsWithToys movement shows there are many women in STEM fields, Sumner and others say more needs to be done to change demographics.

"There are definitely barriers within universities in terms of the acceptance of the quality of women's work and the recognition of that quality,” Sumner says. “There are a lot of really good social science studies that show that there are some significant barriers to having a large number of women in STEM fields. But when you know those barriers are there, you can break them down.”

So did Kulkarni actually help female scientists and engineers out by highlighting the passion of women in STEM fields? Sumner wouldn’t go that far.

“I don’t think he’s the one that did us a favor. Those sorts of comments are unfortunately common and they’re usually damaging,” she says. “I think that Twitter did us a favor, and the woman who started the hashtag. I think that specific comment just sort of captured the right time for those of us who are girls with toys to really respond very strongly.”

Check out some more #GirlsWithToys tweets below.

In 2015, are we still referring to scientists as "boys with toys?" #girlswithtoys @krhorton Dr. K. Renee Horton pic.twitter.com/iX5lvImXaY