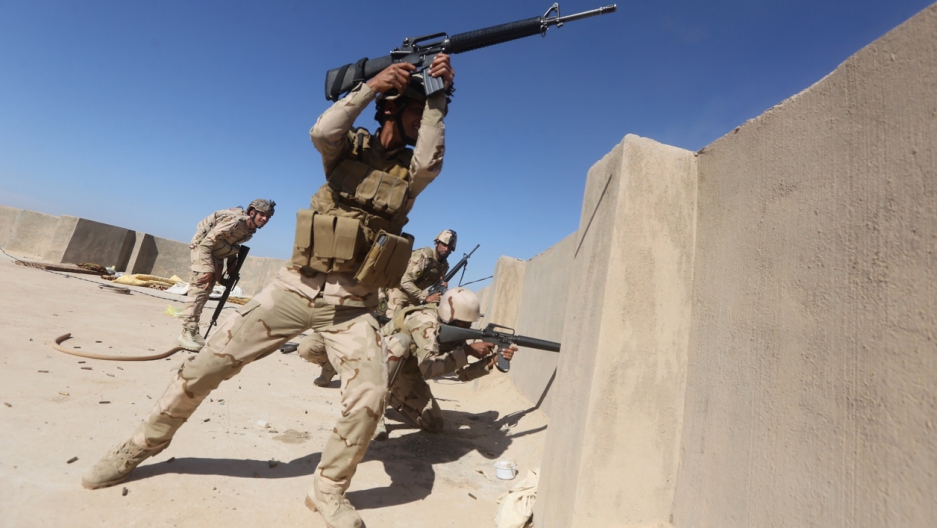 Iraqi soldiers fire their weapons toward Islamic State positions in the Garma district, west of the Iraqi capital Baghdad, on April 26, 2015.
Share

It's been a very good week for the Islamic State. Last weekend the group took control of the key Iraqi city of Ramadi. The unexpected defeat sent Iraq's military strategy into turmoil and called into question the effectiveness of US airstrikes.

Then the Islamic State managed to take full control of Palmyra, an ancient city in Syria full of both important ruins and tens of thousands of human beings. The rout was swift. In the aftermath cowering residents reported that militants were "everywhere." Soldiers fighting for the Syrian army said they had run out of ammunition. One told the New York Times that the 19-year-old daughter of a Syrian general was left for dead, decapitated, in the city's streets.

Syrian activists are warning that the Islamic State now controls half of the country. On Friday, the militants reportedly took control of the last government-run border crossing between Syria and Iraq.

The United States has long resisted intervening in Syria beyond airstrikes. But as things get worse, it's hard not to imagine that the American military is drawing up a Plan B. Last week US Special Forces crossed over the Syrian border and executed an Islamic State leader. It was only the second time, that we know of, that US forces were on the ground fighting in Syria. But it could be a sign of things to come.

Of course, it was desperately bad in Syria long before the Islamic State arrived. Palmyra itself has been caught in the fighting between Syrian government forces and rebels for years. Its ancient ruins were in ruins before this week. And many of city's sites have been looted by one group or another since the conflict broke out in 2011.

Millions of Syrians have been displaced. More than 220,000 have been killed. More than 80 percent of the country is without electricity. Life expectancy for Syrians has dropped by 20 years. And the Islamic State has taken over much of the country. This all stems from an authoritarian government refusing to grant peaceful protesters the democratic concessions they demanded.

Nepal is still reeling from a series of devastating earthquakes. People are still living in makeshift tents. And they are still desperate for food and other relief. Yet despite this enormous need, aid donations from around the world are falling critically short.

The United Nations has appealed for more than $400 million to help with Nepal's recovery and reconstruction. It has so far only raised about 15 percent of that. Part of the problem, as is always the case with natural disasters like this one, is that the story has dropped from international headlines. Without the media coverage, it can be harder to convince governments and others to contribute.

But there is another problem: Nepal's government is famously corrupt. Activists fear that a series of dubious actions in the aftermath of the quake has scared away potential donors. For instance, the country's prime minister established a disaster relief fund controlled by the central government and demanded that all money meant for victims of the earthquake travel through it.

To help this along, the central bank in the days after the quake began seizing accounts associated with disaster relief. This made aid organizations pretty nervous that their money could be lost to a group of people who treat graft as an accepted form of administration.

Corruption has been a problem in the wake of other major disasters — in Indonesia, Haiti and elsewhere. Yet $9 billion was given to Haiti after the earthquake in 2010. More than $13 billion was given to countries affected by the 2004 earthquake and tsunami. If we are talking about bottom lines, here it is: the Nepali people need the help. This from the United Nations: “If we don’t act quickly, the implications will be severe. We can only expect misery, a crippling loss of dignity and the real potential for more deaths.”

Eurovison is back. And it's just as crazy as it always is. For those who are totally out of touch with the rest of the world, Eurovision is the greatest of all televised music contests. It is greater than American Idol. It is greater than The Voice.

“It’s campy, corny and frequently corrupted by offstage politics. It has its own strange definitions of Europe (Israel?) and music,” wrote GlobalPost Senior Correspondent Corinne Purtill last year. “But whether you love to hate it — or hate to admit that you love it — there’s no denying the enduring power of the Eurovision Song Contest, the Europe-wide talent show that has seen more than half a century of sequins, scandal and singing grandmas.”

Last year Conchita Wurst, an Austrian drag queen, won it all. It will be a hard act to follow. But here is a look at some of the frontrunners, from Russia to Armenia.