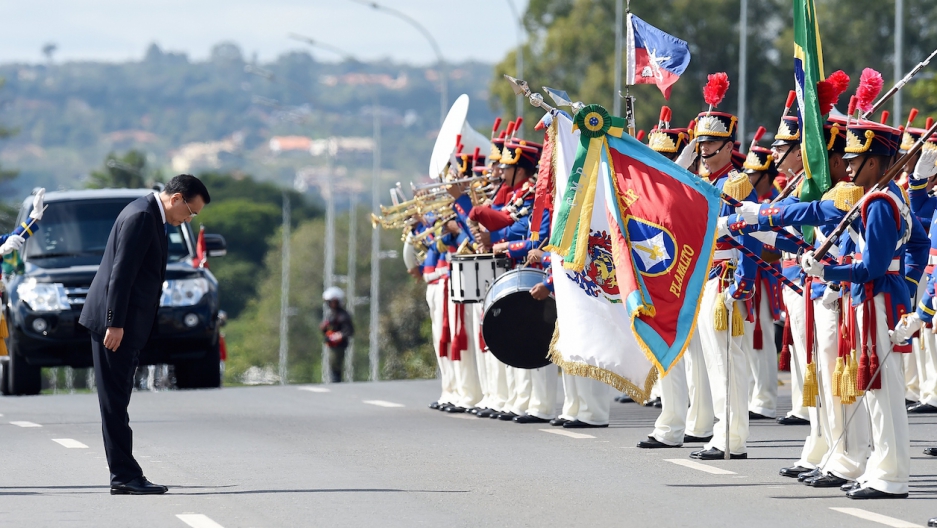 China's Prime Minister Li Keqiang reviews the honor guard during his welcome ceremony at the Planalto Palace in Brasilia on May 19.
Credit: Evaristo Sa / AFP
Share

LIMA, Peru — It seems like China couldn't be more at home on Washington’s doorstep.

The Asian giant’s growing clout in Latin America has been in the spotlight again this week with Prime Minister Li Keqiang’s tour of Brazil, Chile, Colombia and Peru.

Along the way Li has been inking more of the kind of deals that have helped China’s trade with Latin America grow a staggering 24-fold in a little over a decade, to $289 billion in 2013. The Chinese government wants to see that number soar to $500 billion in the next 10 years.

Experts predict China will overtake the European Union as this region’s second largest trading partner next year. The United States’ status as No. 1 will be under threat after that.

On the one hand, China needs Latin American commodities like oil, soybeans and metals. On the other, countries from Venezuela to Argentina rely more and more on Chinese demand for their exports.

So, what’s at play during Li’s visit? And should Washington be worried?

1. Railway through the Amazon Workers prepare the track bed for the new Light Rail Vehicle (VLT) that will run along Avenida Rio Branco in downtown Rio de Janeiro, Brazil on January 22, 2015, as part of the city improvements for the Olympic Games in 2016.

One of the biggest deals this week is a proposed mega-railway from the Brazilian Atlantic to Peru’s Pacific coast, which would make it easier to move raw materials to hungry Chinese markets.

The plan is still on the drawing board, with Li and Brazil’s President Dilma Rousseff only agreeing this week to launch a feasibility study. Such a feat of engineering is expected to run up many billions of dollars.

The railway would stretch well over 2,000 miles, and cross the world’s largest jungle, the Amazon, and second highest mountain range, the Andes. That would save shippers the time and extra expense of using the Panama Canal to move goods.

But environmentalists and rights groups are concerned this megaproject would tear through pristine rain forest, including areas inhabited by “uncontacted” indigenous communities. Still, some concede that a railway could be less harmful than a road. A child walks through the Champamarca neighborhood, which stands next to piles of mineral waste from the Paragsha strip mine in Cerro de Pasco, several hundred kilometers east of Lima.

There’s a plethora deals on the table this week in Bogota, Brasilia, Lima and Santiago — part of the whopping $250 billion that China aims to invest in Latin America within the next 10 years. They range from China’s purchase of 22 jets from Brazilian company Embraer to contracts for Chinese companies to build up the region’s lagging ports and roads.

But high on the agenda is mining. Peru and Chile are two mining superpowers, overflowing with the metals that Beijing needs for its construction and manufacturing booms.

Peru ranks seventh globally for production of metals including gold, silver, copper and zinc. Chile is easily the world’s largest producer of copper and lithium, the key ingredient in cellphone and computer batteries.

Yet while one-third of new investment in Peru’s $27 billion-per-year mining sector comes from China, the Asian giant accounts for a negligible portion of Chile’s annual $36 billion mining output. One way Li will seek to remedy that is by signing a treaty with Chilean President Michelle Bachelet to stop double taxation for Chinese companies.

China’s loans to countries and firms in Latin America and the Caribbean since 2005 have totaled $119 billion.

However, “the terms are not really the best for Latin America,” says Paulina Garzon, of the China-Latin America Sustainable Investment Initiative.

Latin America's most staunchly free-market economies, such as Peru and Chile, have a much stronger hand when negotiating with Beijing.

She notes that Chinese lending has often been more costly for borrowers than loans from the World Bank or the Inter-American Development Bank.

While Beijing typically lends at 7 to 10 percent over 12-15 years, the multilaterals usually do so at around 4 percent over 18-25 years.

But the responsibility for that may lie more with Washington and Brussels than Beijing. “Latin America needs capital and the supply from the multilateral banks is increasingly limited as the US and Europe, which finance them, have their own problems to deal with,” Garzon says.

Venezuela and some of its leftist allies crowd the top of the list of the region’s debtors to China. On the other hand, Latin America’s most staunchly free-market economies, such as Peru and Chile, are not so heavily indebted to the Asian nation. That means that they have a much stronger hand when negotiating inbound investment and trade with Beijing. Chinese businessman Wang Jing of HKND Group applauds next to members of the Nicaraguan government during the inauguration of a project to build an inter-oceanic canal. The $50 billion canal across Nicaragua is an ambitious rival to the Panama Canal that skeptics dismiss as a pipe dream and protesters say will wreck the environment.

Chinese companies operating in Latin America have a reputation for trashing the environment. Yet Li may be the perfect messenger to turn that around.

In his home country, he is known for promising an “iron fist” against polluting companies. He’s even said smog is “nature’s red alert, a warning against a blind and inefficient model of development.”

Garzon says China actually has stricter — but nonbinding — environmental policies for its companies abroad than most Western nations do, including no new projects in high biodiversity areas and the suspension of operations if there are abuses.

“The problem is that it is not implemented," she says. "There’s no doubt that Li is a champion of the environmental cause within China. Outside China, we are still waiting to see the results.”

China’s surging trade and investments in Latin America are often perceived as a threat to the US, which has — insultingly — viewed the region as its own “backyard.” Yet, some say, Beijing is keen not to step on Washington’s toes.

Washington and Beijing’s rivalry in Latin America should not be seen as a zero sum game.

“China’s trade, investments and loans in the region have a single purpose, which is economic. They are not seeking to influence politics in the region,” says Ruben Gonzalez-Vicente, a professor at Hong Kong’s City University.

He adds that Washington and Beijing’s rivalry in Latin America should not be seen as a zero sum game. Partly because Chinese companies increasingly subcontract firms from the US and elsewhere for things like engineering or environmental impact assessments (EIAs).

“Chinese and US companies operating in Latin America have a shared interested in there being political stability and lower taxes,” Gonzalez-Vicente says. “If you are a US company that provides EIAs, and a Chinese mining company hires you, then that is positive for everyone.”