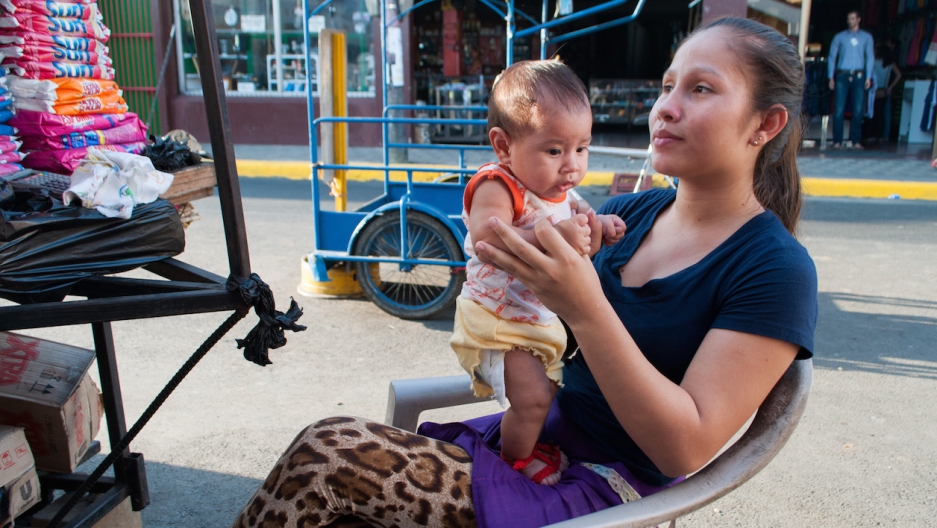 A 19-year-old-mother with her 1-month-old at a market in Leon, Nicaragua.
Credit: Marina G. do Nascimento
Share

LEON, Nicaragua — Three generations of women, each barely more than 15 years apart, operate a family business near Leon’s central market. On a nearby corner, a 19-year-old breastfeeds her tiny baby. Teen mothers are a common sight here.

Nicaraguans have children at an extraordinarily young age. This is considered normal, not shameful. If a woman reaches 20 and does not have at least one child, friends feel sorry for her and say, “The train has left the station.”

According to the World Bank, Nicaragua has the highest teenage pregnancy rate in Latin America, and one of the highest in the world. Last year’s records from health centers in Leon, the country's second largest city, and nearby communities show 32 percent of pregnancies are adolescent.

“It was a privilege to have a baby,” says Gema, 20, an educated, middle-class Leon native who has a 1-year-old daughter. She says that when she started dating the child’s father, “We did not use any protection because we wanted to have a child.” When Gema told her parents, they were angry for two weeks. Then they became happy at the prospect of being grandparents and started shopping for baby clothes with her.

Early childbearing did not affect Gema’s future aspirations. Her mother takes care of the baby while she and her partner pursue university degrees.

She's one of several women interviewed for this story about their experiences with pregnancy at a young age. GlobalPost withheld their last names because of the sensitivity of the topic and the number of minors involved.

Although having a child at 19, as Gema did, carries no stigma here, early teen pregnancies do. “When girls who are 12, 13, or 14 years old are pregnant, they hide it,” Gema says. Sometimes they wrap bandages around their waists for months to disguise their bellies.

Parents often scold and curse these very young mothers-to-be. Public schools are legally forbidden to expel them, but private schools often do, saying that they set a bad example for other students.

“Nicaraguan society suffers from the ‘Virgin Mary Syndrome,’” says Elmer Zelaya, an epidemiologist in Leon who has studied teen pregnancy. This syndrome, he says, idealizes motherhood while demonizing sexuality.

Clara, a petite, shy woman who looks older than her 20 years, reflects the dark side of early adolescent pregnancy in Nicaragua. She had her first child at 15 and still appears traumatized.

Clara’s mother abandoned her when she was little. Later she went to live with an aunt. There, an older cousin sexually abused her, beginning when she was 7 years old. Another man abused her again when she was 12. By her own account, she first had consensual sex when she was 15. Marcio, her partner, was 45 years old. She became pregnant a year later.

Like many young Nicaraguan women, Clara did not know of any contraceptive methods and did not seek information. She wanted to avoid revealing that she was sexually active. Marcio abandoned her when she told him she was pregnant, saying, “It’s your responsibility and I don’t want to have anything to do with it,” Clara recalled. Last year she became pregnant for a second time, with another man. She is now in her sixth month.

Nicaragua is one of just a handful of countries with a total ban on abortion, even for cases of rape or to save the mother's life. But many women still try to terminate their unwanted pregnancies, sometimes in dangerous ways.

More from GlobalPost: How Ethiopia solved its abortion problem

"Nicaragua has the perfect Molotov cocktail for teenage pregnancy."

Clara has tried to abort several times, including once by using an ulcer medicine, Cytotec, that she heard would work if she inserted it into her vagina.

“I drank a home-made potion with baking soda and other chemicals,” she says. “I drank a mixture of lemon tree root and coconut tree root. I used Cytotec, but I think I didn’t insert it right. I drank an abortive serum that was hard to find. I went to Marcio’s farm and went horseback riding a lot.”

“It was God’s punishment,” Clara says about her failed attempts.

Situations like Clara’s, where girls come from family environments plagued by violence and drug and alcohol abuse, are alarmingly common in Nicaragua. Dating at an early age is an attractive but risky way out.

Sex education, other than preaching abstinence, is all but non-existent here.  Talking about sex is seen as encouraging it.

A private organization called Empower, founded by two American missionaries, has had considerable success in lowering rates of adolescent pregnancy in parts of Leon. It trains teen mentors to run seminars about relationships, self-esteem, and the consequences of sex. One of the coordinators, Mario Rivas, said the work is challenging because “Nicaragua has the perfect Molotov cocktail for teenage pregnancy.”

Although Empower officially promotes abstinence, they are aware that this is not the reality for many teens. Its coordinators and mentors do answer any questions about birth control, and redirect many of them to health centers where they can access contraceptives for free.

A few months ago, Rivas heard discouraging news. “Two of my best mentors became pregnant,” he said. “I was so angry when they told me, I didn’t speak for days. I couldn’t believe it.”