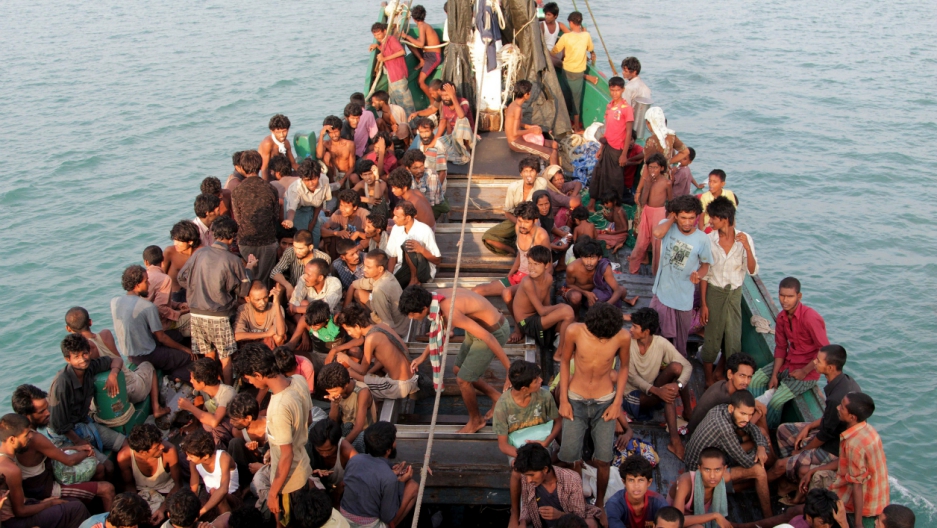 Rohingya migrants sit in a boat off the coast near the city of Geulumpang in Indonesia's East Aceh district of Aceh province before being rescued on May 20, 2015.
Credit: JANUAR
Share

SAY THA MAR GYI, Myanmar — Scores of Myanmar's minority Rohingya Muslims are paying off people smugglers and returning to the squalid camps they used to live in after being held for months on overcrowded ships that were to take them to Thailand but did not move far from shore.

Often beaten, and given little food and water, at least 50 Rohingya came back over the weekend after paying boat captains between $200 and $300 per person, people in one of the camps said.

A crackdown on the people-smuggling network in Thailand, usually the first stop en route to Malaysia, has meant that at least three ships loaded with hundreds of Rohingya and impoverished Bangladeshis were staying off the coast of Myanmar, they said.

Those who came back said the crews beat them with metal rods and engine chains when they asked for more food. Many were starving, surviving on three cups of water and two handfuls of rice a day for up to three months.

About 3,000 of this new wave of "boat people" have washed ashore in Indonesia and Malaysia after the traffickers abandoned them because of the crackdown. Thousands more are adrift on overcrowded boats in the Andaman Sea off Indonesian, Malaysian or Thai shores, while others are closer to home, off Myanmar or Bangladesh.

"The smuggling routes were disturbed, so they let people back for around $200 per body," said Kyaw Hla, a Rohingya community leader who helped bring back about 20 Rohingya in two groups. With the onset of the monsoon season and no prospects of traveling to Thailand, the captains cut their losses and accepted about a tenth of what they often charge, the people involved said.

One of them was Roshida, a 25-year-old widow, who left her camp, Say Tha Mar Gyi, three months ago. The camp, located near Sittwe, the capital of Myanmar's Rakhine state, houses about 13,000 Rohingya who became homeless after violent clashes with majority Rakhine Buddhists in 2012, the camp leaders said.

Roshida, who uses just one name, boarded the ship with two young sons and a nine-month-old daughter.

"To go there — and then to come back — I sold everything: my camp food rations and my house. I have nothing," said Roshida.

On board, she crouched for hours on end in stifling heat, her legs tightly pressed against the back of the woman in front of her. Beatings were common. She said she saw two dead people being thrown off another ship in the area.

"Once, the crew was eating rice and my son started crying for more food. They got angry and burned his arm with a cigarette butt," said Roshida showing a pink, round scar on her son's arm.

'People there are rich'

As word spread that the ships were parked close to Myanmar shores, Maung Maung Soe, the camp leader, gathered money from the community to pay off the smugglers. That allowed Roshida and about 30 other people to return.

Together with Kyaw Hla's efforts, that added up to 50 people who returned to the camps around the area. Rohingya elders say there may have been more people returning to remote towns in the northern part of Rakhine.

The people in the camp survive off rice distributed by charities. They have no access to adequate healthcare, proper education or jobs.

One man close to local traffickers, who did not want to be identified, said that before the crackdown in Thailand, a boat with 10-15 people would leave one of the nearby Rohingya villages and camps every 7-10 days — and there are dozens of them peppered along the Rakhine state coast.

Still, local government officials insist there is no evidence that people from Myanmar were on the boats floating off the coasts of several Southeast Asian countries.

"The camps are stable," U Tin Maung Swe, a secretary for the Rakhine state government said. "The people there are rich. They have land and they sell their crops on the market," said the official, showing a booklet with projects such as an asphalt road and a school built with state money in the camps.

But a Rohingya woman in the eighth month of pregnancy and her husband — both brought back from the ships by Kyaw Hla over the weekend — worried about the future as they tried to return to life as usual in their tiny bamboo hut.

The woman, 20-year-old Be Be Asha, was saved at the last minute by her husband and women around her after traffickers were about to throw her off the ship when she lost consciousness. She says she has not recovered from the 45-day ordeal and was worried about the unborn baby.

"I would like to go for a check-up to the clinic in the nearby village," she said.

"But we don't even have enough money to get there."