Iranian cartoonist Atena Farghadani stands trial for charges that include insulting members of parliament and spreading propaganda against the system.

What came next for the 28-year-old artist? Arrest. Solitary confinement. A heart attack. And now a sentence of 12 years and nine months in prison for spreading anti-Tehran propaganda and insulting the country's lawmakers and supreme leader.

The image that led to her arrest came while Iran sought to outlaw IUDs and vasectomies, as Iran's leaders pushed to increase the nation's population. Amnesty International today called the sentence "a terrible injustice, and a violation of her rights to free expression and association.''

She was initially jailed for five months in 2014 at the notorious Evin prison. She was released in December, but was detained again after publicly discussing her mistreatment by prison guards. 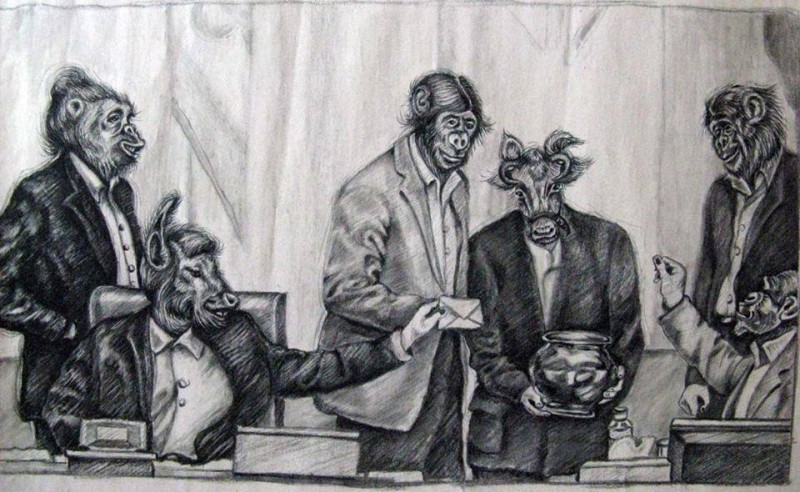 Athena's cartoon depicting members of the Iranian parliament as animals voting on the prohibition of voluntary permanent contraception, or vasectomies.

Three weeks after her second confinement, Atena went on a hunger strike to protest the poor prison conditions. The move led to a heart attack and a brief loss of consciousness in February, her lawyer told Amnesty International. Atena Farghadani has since been moved to another detention center and stopped her hunger strike, the human rights group reports, but advocates remain concerned about her health.

Amnesty International is leading a call to action here, while the hashtag #freeAtena is being used to raise support and awareness on social media.

A version of this story first appeared in Global Voices, a site containing 1,200 bloggers and editors worldwide.