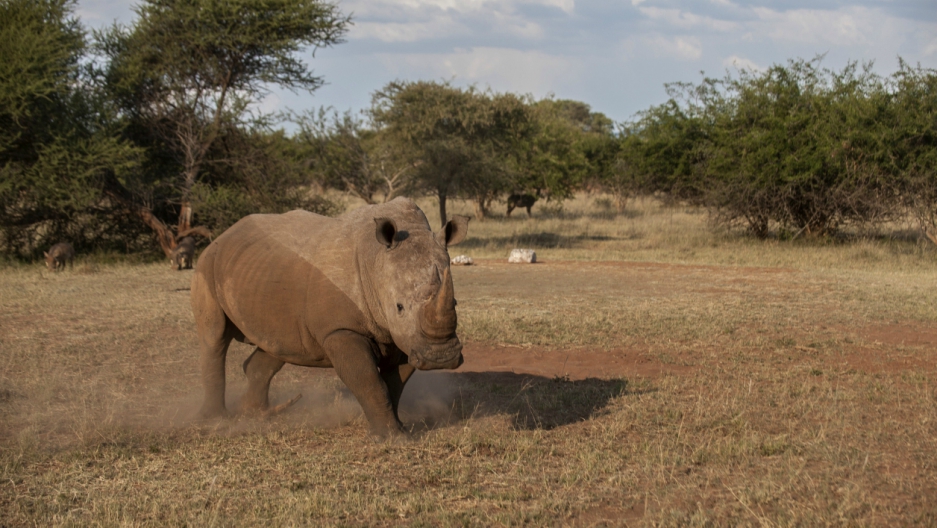 A rhinoceros bull stands in a farm near Vaalwater in the Limpopo Province on March 17, 2015. Official statistics for 2014 show that a record number of 1215 rhinoceros were poached in South Africa.
Credit: STEFAN HEUNIS
Share

SAN ANTONIO — In the Texas grassland, home to white-tailed deer and rattlesnakes, outdoorsman Charly Seale sees a vast sanctuary of open spaces that could be used to protect the wild African rhino from its biggest enemy — poachers in search of the animals' valuable horns.

Seale is part of an ambitious project organized by animal welfare groups in the United States and African countries to bring hundreds of orphaned baby southern white rhinos to the south Texas grasslands, whose climate and geography are similar to their native South African veld.

That is if governments will let them and the Texans can afford a transportation bill that could run tens of millions of dollars, all paid for by private donations.

"This is not for the faint of heart or for the faint of checkbook," said Seale, head of the Texas-based Exotic Wildlife Association's Second Ark Foundation, pointing out no public money will be sought for the effort, which is still in its early stages.

Rhino poaching hit a record in South Africa last year, home to almost all the rhinos in Africa, with 1,215 killed in 2014, according to South Africa's Environment Ministry.

International crime syndicates are after rhino horns, which are used in traditional Asian medicine and sell at prices higher than gold to the newly affluent in places such as Vietnam, where a belief, with no scientific basis, exists that they can cure cancer.

In January, South Africa said it had moved about 100 rhinos to neighboring states to combat poaching. In 2015, another 200 rhinos will be moved to what Environment Minister Edna Molewa said are "strongholds" where the animals will be safer from poaching.

Some have ended up in Botswana, a country that allows the shooting of poachers on sight.

But what about Texas? If the plan goes forward — and there are many issues yet to be resolved — it would likely be the largest attempt outside of Africa to move rhinos out of harm's way.

The South African Environment Ministry says it has yet to receive a formal request for export but added that strict criteria under international endangered species agreements would have to be met, including zoo accreditation, standards of care and record keeping.

South Africa is home to about 20,000 rhinos, but under the Texas plan, called Project 1,000, far fewer rhinos would likely be approved for export to the US state. Africa has two different species of rhinos: white, which number about 20,000, and black, whose population is about 5,000, according to the website savetherhino.org.

The Second Ark Foundation, which has worked to preserve the African addax and the scimitar-horned Oryx, is working with South African wildlife organizations to handle the logistics.

"There is a lot of red tape on both sides and there would be a need to quarantine the animals," Seale said. "Most of the rhinos that would be transferred are orphan, baby rhinos."

The challenges are formidable. Most of the rhinos would be under three years old and younger animals would have to be fed milk by bottle. They are typically darted in South Africa, and would then be transported by truck and shipped as air cargo.

Rhinos are not the best of travelers. Their health could be put in jeopardy by a long trip and airplanes can only move a handful at a time. But if it goes according to plan, the rhinos would be housed on ranches in south or southwest Texas that can run in size to 100,000 acres-plus.

The rhinos would be well guarded, with their DNA sequences stored in a database and micro chips placed in their horns while they are kept under surveillance at the ranches, many equipped with helicopters to keep an eye on the animals.

If things go well in Texas and South Africa can put a lid on poaching, the Lone Star-raised rhinos could eventually be returned to Africa. None would be hunted in Texas, said outdoorsman Alan Warren, who is part of the Texas group.

"It's not about hunting, it is about preserving and saving the species from certain annihilation in South Africa," Warren said.