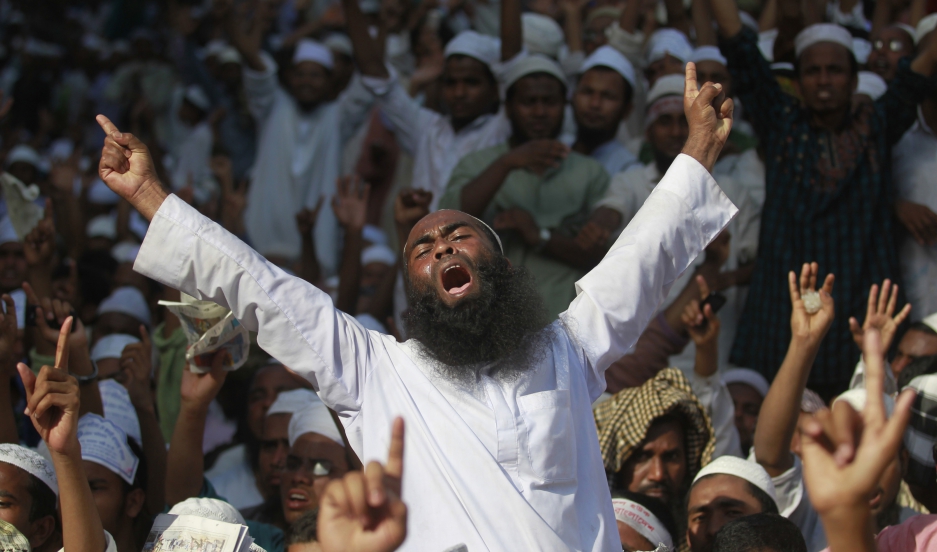 Activists from Hefajat-e-Islam, a Bangladeshi fundamentalist Muslim group that calls for the executions of atheist bloggers in the country, shout slogans during a 2013 rally.

Last Tuesday, 32-year-old Bangladeshi blogger Ananta Bijoy Das was hacked to death by masked men as he was making his way home from work. He was the third blogger to be murdered in Bangladesh this year, and the spate of attacks is a signal of rising threats to freedom of speech around the world.

Madeleine Earp of Freedom House points out that Bangladesh's secular government has done little to discourage the rise of these killings, which have been carried out by fundamentalist Muslim groups.

“In 2013 the prime minister visited the family that was killed then, — but at the same time she arrested four bloggers under Internet law and accused them of using the Internet to harm religious sentiment," Earp says. "That starkly undermines this goal of keeping Bangladesh secular."

George Packer, whose recent New Yorker article looks at the murders, says the arrested and murdered thinkers and bloggers are “exactly the type of people you want to see taking a central place in a country like Bangladesh," people who ones who test the limits of free speech.

“They can be controversial. But this is what free speech is about,” he argues. “Who else is going to stick their head out very far in Bangladesh having seen this pattern of very public and hacking to death of these men?

And that lesson is spreading far beyond Bangladesh, Packer says. “The collision between radical Islamism and free speech has led to violence in countries all around the world, from Europe to South Asia and the Middle East,” he says. “And although we may not see connections between France, Denmark, Pakistan and Bangladesh, al-Qaeda does."

When al-Qaeda took credit for the murder of Bangledeshi blogger Avijit Roy in February, the group said it “taught a lesson to blasphemers in France, Denmark, Pakistan and now in Bangladesh.”

Along with attacks at Charlie Hebdo, the French satirical magazine, and last year’s shootings in Copenhagen at a free speech event, Packer says the killings in Bangladesh "were global events in what's becoming a worldwide struggle between people who want to exercise their freedom, and violent groups who want to intimidate and silence them through murder.”

This story is based on an interview from PRI's To The Point with Warren Olney.