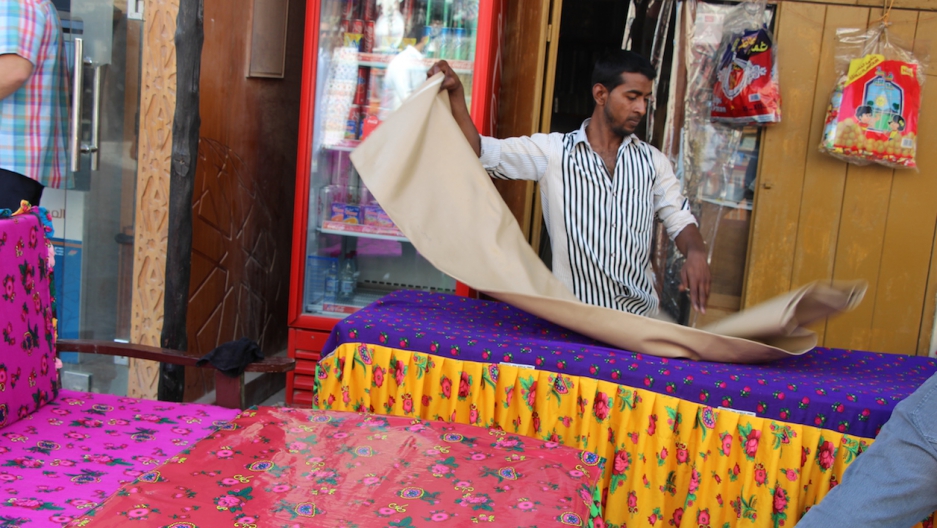 SAILIYA LABOR CAMP, Qatar — The roads in the Sailiya labor camp are littered with construction rubble and cast-aside couches. Far from the glistening high rises and 5-star hotels of Doha, workers live jammed together without running water or sewage pipes.

Four Sri Lankans emerge from a wooden shack that they share for housing. They work as construction laborers in the city center for 8-12 hours a day in 105 degree heat. One says he earns the equivalent of $330 per month, typical pay for unskilled workers.

He and an estimated 1 million expatriate laborers in Qatar are part of the kafala employment system, under which employers sponsor workers from abroad and can easily deport them. International unions and human rights groups strongly criticize kafala, which is also used in other Gulf countries, for exploiting foreign workers.

Qatar in particular has come under scrutiny as it builds stadiums, high-rise hotels and other massive construction projects for the 2022 soccer World Cup in Doha. One year ago the government announced a series of labor reforms, including banning the practice of companies keeping workers’ passports in order to prevent them from changing jobs or leaving the country when working conditions get bad. The new rules increased sanctions for passport confiscation five-fold.

But in Sailiya and Doha, GlobalPost interviewed a dozen workers at random who all said employers still hold their passports. But a Qatari former diplomat familiar with the controversy says human rights complaints are “a broken record. Of course some companies, mostly Western, don’t follow the rules. We’re doing all we can. We don’t want our country built on exploited labor.”

Indeed, workers continue to flock to Qatar and other Gulf countries because they earn much more there than in their hometowns in India, Pakistan, Nepal, Sri Lanka or other developing countries. Their wages often allow them to build houses back home and pay for their children’s education.

One Kenyan worker helping build Doha’s new light rail system says his pay is good, and praises the fairness of his immediate supervisors.

But the labor contractor who hired him consistently pays wages 2-3 weeks late, he says, making it difficult to buy food and other necessities.

"It comes to the point we are starving,” he said. “But we don't have any other option. We cannot strike.”

Strikes, or even organizing trade unions, are illegal in Qatar and in many countries of the region. Workers can complain to labor courts or the government’s Human Rights Committee, but many say the process is slow and bureaucratic.

The government plans to implement additional reforms. The Human Rights Committee will soon require companies to pay laborers through direct deposit to banks. The committee says the reform will document if companies are shortchanging workers or making late payments.

But some workers expressed worry that they’ll have difficulty accessing their money because labor camps have no ATMs, let alone bank branches.

“Workers will have to take a bus from the labor camp to town just to get their money,” said one taxi driver.

"But there is no significant improvement.”

Zaccara says the government doesn’t have enough labor inspectors to implement the new rules and lacks the political will to rein in powerful employers.

"The government should do something more aggressive to force the companies" to follow the rules, he said.

He says the government’s true attitude became clear in early May, when in two separate incidents, police arrested film crews from BBC News and Germany’s ARD TV for filming in a labor camp. Police held the German journalists for 14 hours, confiscated their equipment, erased their video and refused to allow them to leave the country for five days.

The BBC journalists were held for two days, one of the jailed reporters wrote in an account published Monday.

“Bizarrely, [after our release] we were allowed to join the organized press trip for which we had come,” Mark Lobel wrote.

“It was as if nothing had happened, despite the fact that our kit was still impounded, and we were banned from leaving the country.”

"If everything is OK, why are you concerned about what reporters are showing?" asked Zaccara. “The government is worried.”

He noted that Qatari officials justifiably expressed outrage at the arrest of two Al Jazeera TV journalists in Egypt for  reporting on that country’s Arab Spring uprising. Al Jazeera is financed by the Qatari government.

"They don't have the same policy here in Qatar,” he said. “Of course, it's a contradiction."