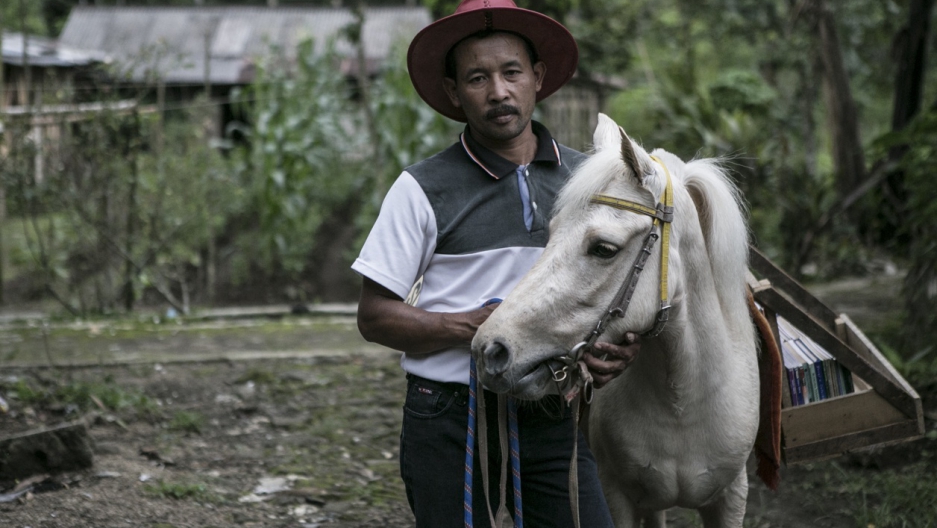 42-year-old Ridwan Sururi poses for a portrait with Luna, a horse used as mobile library on May 5, 2015 in Serang Village, Purbalingga, Central Java, Indonesia.
Share

Luna is a small, unassuming, sometimes slightly dirty white horse. But she is also one half of a partnership bringing education and pleasure to a remote part of Central Java.

Ridwan Sururi is the horse-lover who completes the team, and who wanted to use his hobby for the greater good. The inspiration came from his friend and fellow horse enthusiast, Nirwan Arsuka.

“He had this idea to create a mobile library using horses. I liked the idea, but sadly I didn't have any books. So, he sent me boxes of books,” Suriri told the BBC.

That was in January. Since then, other donors have also helped Suriri with his project. Three times a week, he visits schools and homes, loading his growing collection onto Luna’s back before traveling the roads and tracks of the nearby villages in the Purbalingga region, lending out his books for free.

Luna’s not actually his. She’s one of three horses that Suriri looks after for an absent owner. But he says the owner doesn’t visit very often. Actually they probably have no idea that, with nearly 1 million illiterate adults in Central Java, Luna and her dedicated career are doing their bit to give people the chance to read. Sururi loads books while a boy selects one from the mobile library on May 5, 2015.