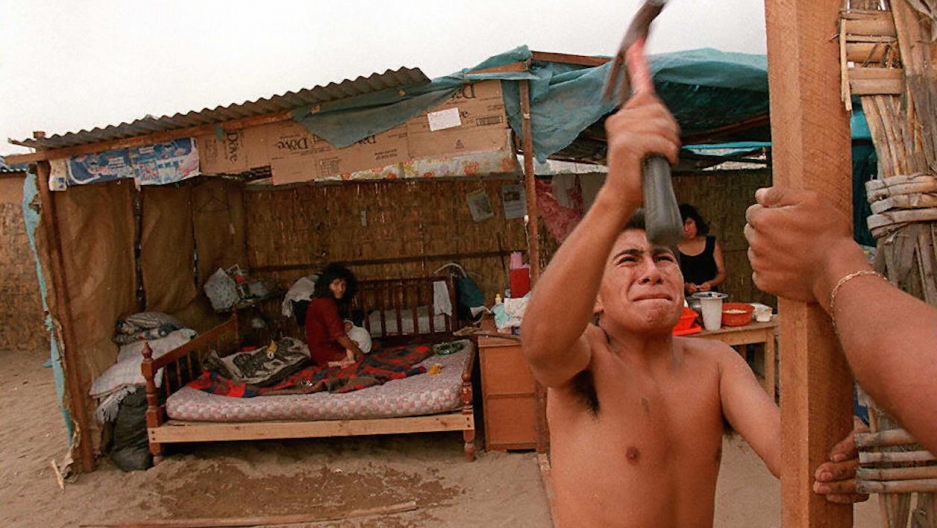 LIMA, Peru — “It was a good thing no one was watching TV,” says Janet Palomino, staring anxiously at the hole in the ceiling of her ramshackle living room.

Directly below the jagged opening, sprawled on a sofa watching cartoons, is her 7-year-old daughter Elanie.

“I can’t sleep at night for the worry of it,” adds Palomino, 38. “If bits of brick are falling from the ceiling on their own, then what’s it going to be like if there’s an earthquake?” Here in Villa El Salvador, a vast slum of 1 million people on the dusty outskirts of Lima, that is an excellent question that too few are asking.

According to experts, the Peruvian capital is one of several major cities around the world overdue a huge temblor. Istanbul and Tehran are also high on the list.

“Right now, as major populations increase, millions and millions more people are living in areas where significant earthquakes are anticipated,” warns Bruce Presgrave, a geophysicist at the US National Earthquake Information Center.

“At least 8.5,” adds Hernando Tavera, the earthquake unit director at the Geophysical Institute of Peru, of the likely magnitude of Lima’s big one.

With quakes measured on a nonlinear scale, a magnitude 8.5 is roughly 11 times more powerful than Nepal’s 7.8 that killed more than 8,000 people in April.

“We don’t know when,” Tavera adds. “All we know is that every day that goes by without anything happening brings us a day closer to this major event.”

Yet few areas may be as ill-prepared as Villa El Salvador, where most buildings fail to comply with even the most basic seismic requirements. Most have been built by their occupants, or by friends or neighbors with a bit of construction experience. Virtually none have had any input from architects or civil engineers. Many, like Palomino’s, are falling apart even without the violent shaking of a major quake.

Inadequate building techniques were one reason so many died in the recent Nepal earthquakes, experts say.

“What did not collapse is the US Embassy,” notes Marcial Blondet, a professor specializing in seismic engineering at the Pontifical Catholic University of Peru (PUCP). “Why? Because they have a strict construction code and they follow it.” As I tour Villa El Salvador with Cesar Huapaya, a university colleague of Blondet’s, the potentially deadly problems are glaring.

They include the use of weak hollow bricks for structural parts of buildings, flying second floors and the lack of the recommended 3-inch gap between buildings.

In many cases, the workmanship is so shoddy that Huapaya’s expertise is hardly needed to spot the risk.

Local carpenter Ivan Mosquera, 49, says the roofs of several houses around his block have collapsed under their own weight.

“People just build their houses whatever way they can,” he adds. “They live from day to day, and aren’t worried about earthquakes. No one’s thinking ahead like that.”

On one three-story building, this sagging, flying roof of concrete and cinder blocks already appears semi-detached and ready to crash to the ground at any moment. “I had no idea,” says Walter Castro, the 46-year-old moto-taxi driver who rents the property, when Huapaya points out the danger to him.

On the same street, a long, diagonal, hastily cemented-over crack runs along the facade of a second floor built entirely, and dangerously, with hollow bricks. Palomino’s three-story home — the one with the hole over the sofa — is another case in point. But unlike many locals, she is at least aware of the risk.

The first floor was put up when her mother Guillermina Ceron, 59, moved here during a wave of land invasions by Lima’s dispossessed underclass back in the 1970s. Since, then Palomino and her two sisters have put up two new floors piecemeal to house their extended family, including four kids ages 4 to 13.

And the dangers are manifest. Falling bricks have left two jagged holes in the ceiling. Exposed, rusting iron bars can be seen poking through the concrete. And the bare, unpainted cement and brickwork are visibly uneven.

Palomino listens intently as Huapaya gently explains that her husband-in-law’s plans to build a fourth floor are a seriously bad idea.
Compounding the danger is Villa El Salvador’s loose, sandy soil that could amplify the shaking of a quake here.

Even upscale parts of Lima, built in line with seismic regulations and on ground that is solid rock, could face significant damage in the event of an 8.5 quake. But nothing there compares to the risk in Villa El Salvador.

One report, by the Peruvian government's Disaster Prevention Research Center, warns that 51,000 people would be killed and nearly 700,000 injured in Lima’s metropolitan area in the event of a big quake. A disproportionate number of those would come from Villa El Salvador.

Another study, by the Peruvian-Japanese Center for Seismic Research, found that 88 percent of homes in Villa El Salvador would suffer serious damage in a magnitude-8 earthquake.

In theory, the overstretched and underfunded local municipality is responsible for ensuring that earthquake-resistant building standards are met. But no one we spoke with said Villa El Salvador’s authorities are actually carrying out this duty. The municipality didn’t respond to GlobalPost’s request for comment.

Yet the problem goes far beyond this one sprawling, impoverished Lima suburb.

Blondet gives Peru two out of 10 for its overall earthquake preparations. “You need the political will,” he adds. “There needs to be a strong decision coming from the very top.”

“You need to prioritize. The first thing you reinforce should be the schools. Then, you need to secure the buildings you will need after an earthquake, starting with the hospitals, but also the fire stations, police stations and some other public buildings.”

But for Palomino, and millions of other poor Peruvians, the problem is much simpler. After Huapaya explains to her how to make her home more quake-resistant, she’s now wondering how on Earth she’ll ever raise the cash.