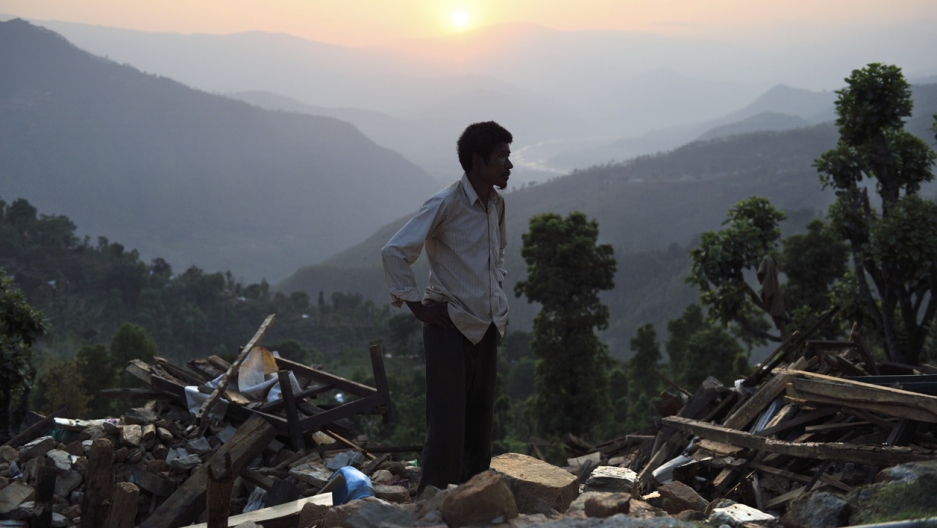 Ganga Bahadur Tamang stands amid the collapsed remains of what used to be his house in the village of Sangachowk in northeastern Nepal.
Share

BANGKOK, Thailand — Scientologists profess a range of supernatural powers. They claim the ability to turn drunk people sober in minutes. A Scientologist can heal the traumatized, so they say, simply by reconnecting a victim’s body with a “thetan,” or immortal spirit.

None of this is backed by medical science. But that hasn’t stopped Scientologists from flying to Nepal — alongside many other religious and spiritual groups — to practice dubious healing techniques on grieving earthquake survivors.

The Nepalese are still reeling from an earthquake that took more than 8,000 lives and left much of the country in ruins. Roads are split in half, towns are reduced to rubble and bodies are buried deep in piles of debris.

This catastrophe has summoned military units and aid workers from around the globe. Among them: the Church of Scientology’s “Volunteer Ministers,” which have popped up at natural calamities from Japan to Haiti to Indonesia over the past 15 years.

This Scientologist disaster squad is dispatched to deliver their signature healing techniques. Called “assists,” these procedures don’t involve medicine or medical equipment. They usually amount to a set of verbal commands along with some with light touching, such as running fingers up a person’s spine. Trauma victims are often asked to re-enact painful events at the location in which they occurred.

The purported effects of “assists” are nothing short of miraculous.

They claim grief will evaporate from a traumatized mind. They claim serious injuries can rapidly heal. According to The Scientology Handbook, “accidents and illness and bacterial infection are predetermined in almost all cases by spiritual malfunction” and Scientologists can fix these ailments by addressing a person’s inner thetan.

In areas of Nepal where “nearly everyone has suffered the loss of a family member,” Scientologists have been “training people on these simple techniques so they can help others.”

Here’s one Scientologist’s account, disseminated by the church, of a healing session with a Nepalese woman who “lost her husband and children”:

“‘She was just wandering around her house that had collapsed and was understandably very sad. She said she wanted an assist so I proceeded.’ ... after just a few minutes, the woman was visibly brighter and felt for the first time since the earthquake she could begin to come to grips with what happened.”

In recent years, Scientology has been the subjects of multiple exposés that portray the religion as a nefarious cult. But Scientologists have also caught grief from psychiatrists for performing unscientific techniques on disaster survivors as far back as the Sept. 11 attacks in 2001.

As Nada Stotland, a former American Psychiatric Association president, previously explained to GlobalPost: “They have completely untested methods of dealing with people’s problems.”

“These techniques,” she said, “have never shown results in scientific tests of any kind.”

According to Scientology press releases, the Volunteer Ministers are also handing out ready-to-eat meals and supplying generators to earthquake victims in Nepal when they’re not visiting hospitals to perform “assist” techniques.