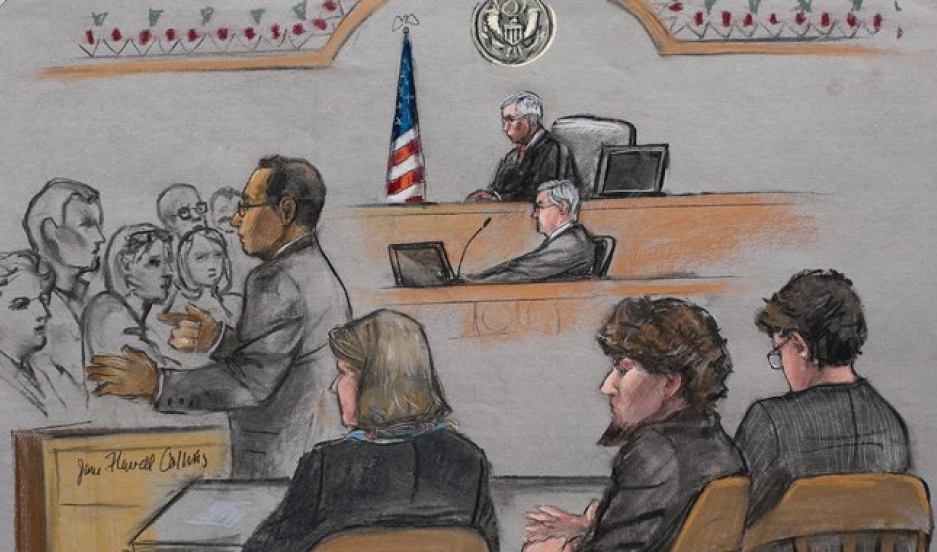 Boston Marathon bomber Dzhokhar Tsarnaev has been sentenced to death for the 2013 killings before thousands of people in Boston's Back Bay.

The jury's decision came after 14 hours of deliberations.

One by one the jury was asked about aggravating conditions — and decided that Tsarnaev, 19, did not show remorse and there was little evidence to show he would not commit another crime. "Killing innocents," prosecutor Steven Mellin said, "was the whole point."

Murder of police officer Sean Collier in performance of official duties: proven on all counts. #Tsarnaev

Many observers were surprised at the speed in which jurors plowed through the 24-page document, says Juliette Kayyem, a former Homeland Security official.

Tsarnaev was convicted last month of all 30 federal charges against him, 17 of which carried the possibility of the death penalty.

Gone but not forgotten. pic.twitter.com/ra9ND27sJQ

No one disputed his role in the bombings. The defense sought to say Tsarnaev, a college student, was under the influence of his radicalized older brother, Tamerlan, who wanted to punish the US for its actions in Muslim countries. Prosecutors said Tsarnaev was a full partner in the bombing.

Some jurors were in tears after the decision was read.

An appeal of the sentence is mandatory and the process will take years.

If #Tsarnaev wants to appeal his sentence, here's a rundown of the process http://t.co/61NADQbKdt pic.twitter.com/o9NsaiEJhJ

Journalist Masha Gessen, who covered the trial at the federal courthouse in Boston, said the juror selection process offered a clash between Massachusetts culture and federal law. Capital punishment hasn't been legal in Massachusetts since 1982 and hasn't been used in a state case since 1947. "The vast majority of residents are opposed to the death penalty," Gessen said. "On the other hand, it's a federal case, it's a death penalty case.''

What that meant: Any juror who was opposed to the death penalty was automatically disqualified.

The upshot, Gessen said, is that that the court had to choose jurors "from a minority of the state's population, and probably a minority with a fairly distinct political profile."

This is the first time Judy Clarke has ever lost a client to death row, and she's represented the worst. http://t.co/Ar7xxo12sM