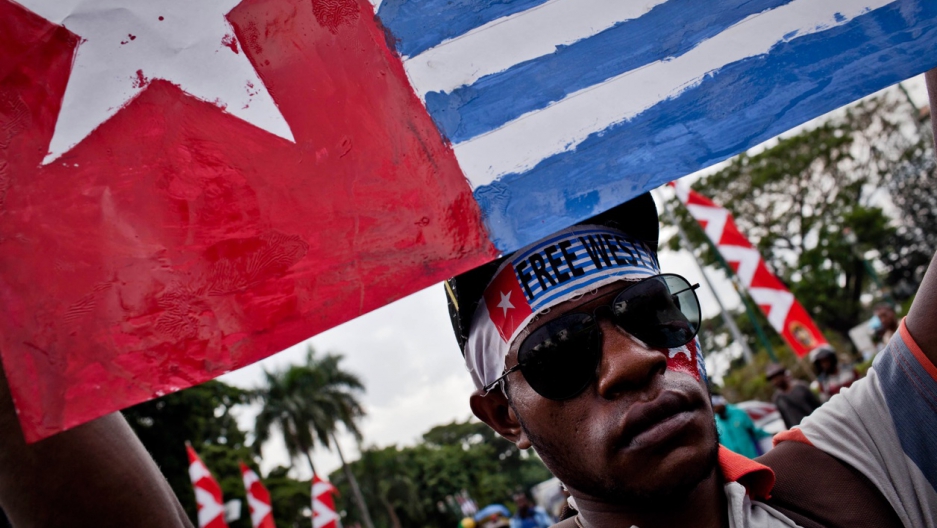 A protester from the Papuan Students Alliance holds the Morning Star flag at a protest in 2013 in Yogyakarta, Indonesia.
Share

It could be a game-changing step for West Papua. That is, if it gets implemented and foreign journalists are any good at their jobs.

“Starting from today, foreign journalists are allowed to and can visit Papua as freely as they can any other part of Indonesia,” Indonesian President Joko “Jokowi” Widodo said last weekend.

Foreign journalists have been virtually banned for decades from reporting on the province, officially for their own protection, but really because the government and military has wanted to keep a lid on their decades-long conflict with a lightly-armed separatist movement.

The ban has definitely helped keep news of violence in Papua out of international news outlets. But it hasn’t helped resolve the conflict much. Human rights groups say Indonesia’s “obsession” with censoring news from Papua only encourages abuses in this highly militarized province.

While the new president’s announcement is a positive development, many foreign correspondents working in Indonesia remain wary. Last year, two French journalists were arrested for reporting in the province while on a tourist visa. They were detained for more than two months before they were sent back to France.

Andreas Harsono, the Indonesia researcher for Human Rights Watch, said it remains to be seen how freely the police and the military on the ground actually let international journalists do their job.

During his visit, Jokowi also pardoned five political prisoners. He said he wanted to prove the “government’s effort to stop the stigma of conflict in Papua.”

What he didn’t really brag about is the fact that those released had to admit to their “crimes.” They had to say they had been “rehabilitated” to receive the pardon.

Papua’s most prominent political prisoner refused. “I can’t take the clemency because it requires an admission of guilt,” Filep Karma told the BBC during a secretly filmed interview in jail.

Karma was arrested in 2004 at a peaceful demonstration during which a Papuan flag was raised. As is often the case in Papua, the rally ended in a police crackdown. Karma was arrested, and charged with “rebellion” for organizing the flag-raising event. He was sentenced to 15 years in jail.

“I was only expressing the aspiration of the Papuan people,” he told the BBC. “Indonesia has to release me without any condition.”
Human rights organizations agree. They ask for an immediate amnesty for dozens of political prisoners, without condition.