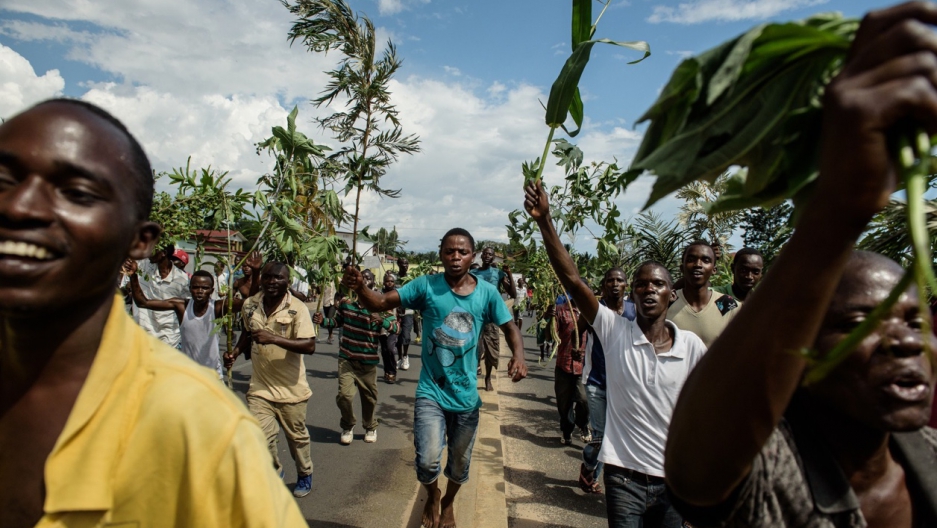 People wave branches as they celebrate in the streets of Bujumbura, Burundi on May 13, 2015 after the radio that the president had been overthrown. Two days later, the coup attempt appears to have been defeated.
Share

JOHANNESBURG, South Africa — The day after an attempted coup in Burundi, the battle raged over a radio station.

Rival factions of Burundi’s army fought for control of the state broadcaster, with clashes reported around its offices in the capital Bujumbura. It was a central point in the battle, with soldiers loyal to the president coming out victorious by Friday and the coup ultimately thwarted.

Why was the radio station so important? With independent stations already forced off the air, state-run Radio Télévision Nationale du Burundi (RTNB) was, and still is, the only remaining broadcaster with national reach. In rural areas of Burundi, some people may not even know about the coup attempt.

In other words, whoever controls radio will control the message to the country.

More from GlobalPost: What happens in Burundi could transform the whole region

Social media has also played a role, leading the government of President Pierre Nkurunziza to block Twitter, Whatsapp and Facebook during weeks of street protests against his plan to seek an unconstitutional third term in office.

But in Burundi as in many other African countries, radio remains the most important mass medium, with far more reach than newspapers or television. In isolated rural areas, where roads may be patchy, it is the best and cheapest way to communicate to the masses.

Sometimes this power can be dangerous. During the genocide next door in Rwanda — which, like Burundi, has a Hutu-Tutsi population — a radio station infamously broadcast hate propaganda demonizing the Tutsi ethnic group as “cockroaches.” Staff at Radio Télévision Libre des Mille Collines received long prison sentences for their roles in the genocide.

In the neighboring Democratic Republic of Congo, radio has been used to promote peace. Radio Okapi, created by the United Nations mission in the country and a Swiss non-governmental organization, promotes core values of peace and democracy, while playing a strong role in civic education. It is one of the country’s most popular stations.

Ahead of the attempted coup in Burundi, during mass protests against the president, the work of private radio stations was restricted. Police stormed stations and cut transmitters, preventing broadcasters from airing outside the capital.

Maj. Gen. Godefroid Niyombare, who launched the coup on Wednesday, announced it over private radio. That radio station, the popular Radio Publique Africaine, was burned down overnight.

Another independent broadcaster, Isanganiro, said it too had been forced off air. On Thursday the station posted a notice in French on its Facebook page: “Danger: All the most listened to private radio stations in Burundi: Isanganiro, Bonesha, RPA and Renaissance are now shut. Only pro-government national radio continues to broadcast.”

With news that the coup attempt has failed, state radio has again been an instrumental tool, announcing the president's return to the country. Nkurunziza on Friday was expected to deliver a message to the nation over the airwaves of the state broadcaster, RTNB.