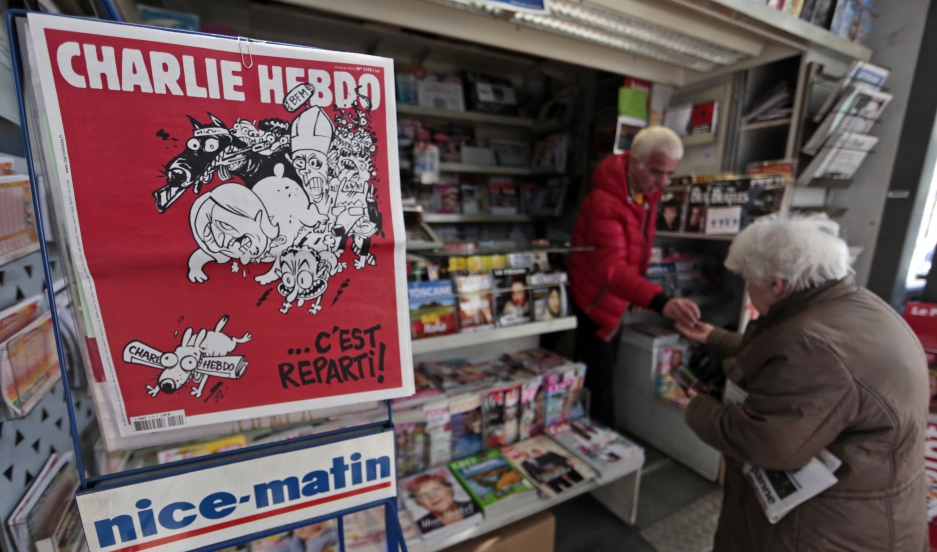 The front page of satirical French weekly Charlie Hebdo, entitled "C'est Reparti" ("Here we go again") is displayed at a kiosk in Nice on February 25, 2015.

Fundraising galas usually make money, not news. But when the PEN American Center announced it would present the Freedom of Expression Courage award to French satirical magazine Charlie Hebdo, the annual dinner suddenly became the center of a huge media controversy.

Six authors announced they wouldn’t attend the benefit and 145 more writers signed a letter protesting the award, writing that “PEN is not simply conveying support for freedom of expression but also valorizing selectively offensive material: material that intensifies the anti-Islamic, anti-Maghreb, anti-Arab sentiments already prevalent in the Western world.”

When some well-known writers defended Charlie Hebdo, the American literary world was suddenly divided into factions.

Charlie Hebdo's American critics argued that because Muslims and other minorities face so much discrimination in France, Charlie Hebdo’s satire of such comunities is unworthy of the PEN honor — if not downright racist and Islamophobic. The magazine’s defenders say the charges aren’t true, and that the refusal of Charlie Hebdo's writers and cartoonists to back down after an attack in January that killed 12 staffers exemplifies the courage that PEN’s award stands for.

Gérard Biard, the editor of Charlie Hebdo, attended the PEN gala to accept the award. In his speech, he said that "being a citizen is to learn that some ideas, some words, some images, can be shocking. Being shocked is part of democratic debate. Being shot is not."

In that spirit, Biard says he wasn't surprised by the controversy the award stirred up. “Charlie Hebdo is always, and has always been, in the middle of controversies," he says.

Biard denies the charges of racism, arguing that the magazine has been a staunch opponent of right-wing, anti-immigrant groups. “Charlie Hebdo has always been an anti-racist magazine," he says. "We fight against all discriminations — to women, to gay people, to Muslims.” At the PEN ceremony, Charlie Hebdo was introduced by Congolese author Alain Mabanckou and Dominique Sopo, the president of the French anti-bias group, SOS Racisme.

The attack in January, and the ensuing controversy over the nature of their cartoons, has not changed how or what Charlie Hebdo publishes, Biard says. “We became a symbol, and we’re not meant to be a symbol — we’re just reporters, cartoonists," he says. "We just want to do our job. And our job is to make people laugh and think. That’s it.”

This story is based on an interview from PRI's Studio 360 with Kurt Andersen.