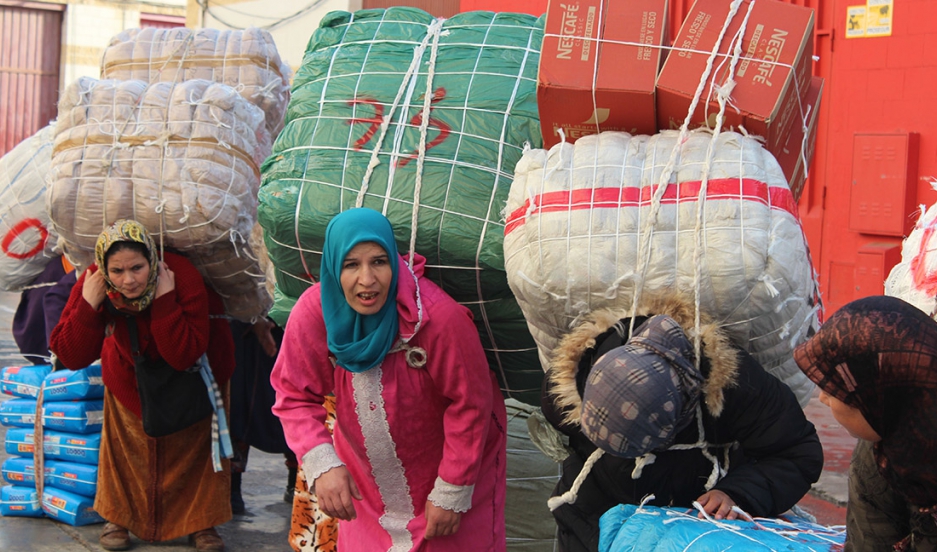 Moroccan women wait at a border crossing with loads of 100-200 pounds of commercial goods on their backs.

The North African enclave of Ceuta is a little piece of the European Union just an hour by boat from mainland Europe. Its land border with Morocco is the gateway for a brisk trade. Commercial goods delivered to the Spanish port are sold in Moroccan souks, just beyond the high dividing fence. 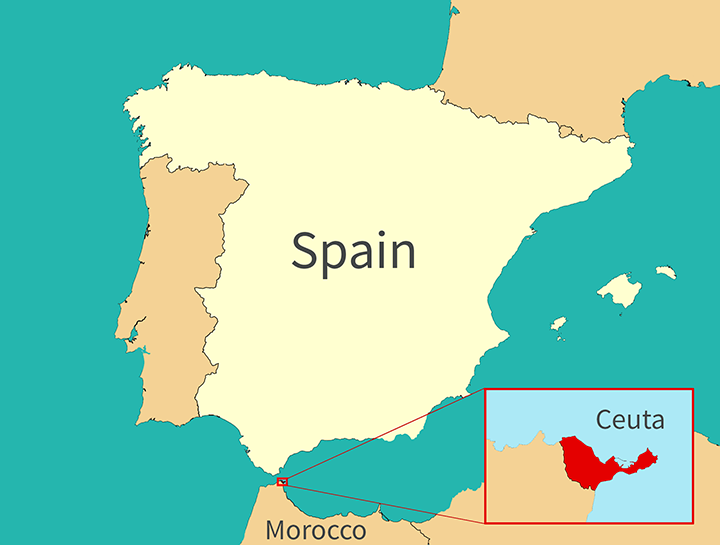 It’s on this border that Moroccan women line up in the middle of the night for the chance to earn $5 a day carrying huge, heavy packages of goods across the border from Spain to Morocco.

These women — known in Spanish as porteadoras, or in French as femme mulets, “mule women” — do not pay any official customs fee or tax at the border. Thanks to a legal loophole tolerated by both the Spanish and Moroccan governments, the goods they carry, which could include anything from Red Bull to cheap diapers, are considered “personal luggage” and are therefore untaxed.

The profits on both sides of the border are high. The American Chamber of Commerce in Morocco estimates that this irregular trade represents a third of the economic activity of the Spanish enclaves of Ceuta and Melilla. The trade also directly supports tens of thousands of Moroccans in the surrounding areas.

Women wait in hopes of getting a package to carry across the border. Spanish guards keep them in a strict line.

Aicha Al Azzouzi has been coming to the border to work on and off for 20 years. Along with hundreds of other Moroccan women, she crosses into the Spanish city as early as possible to secure a spot in line. Many women actually arrive the night before, and sleep in the road outside the warehouses on pieces of cardboard. Al Azzouzi says that more and more women have been coming to work at the border, escalating the competition between them. 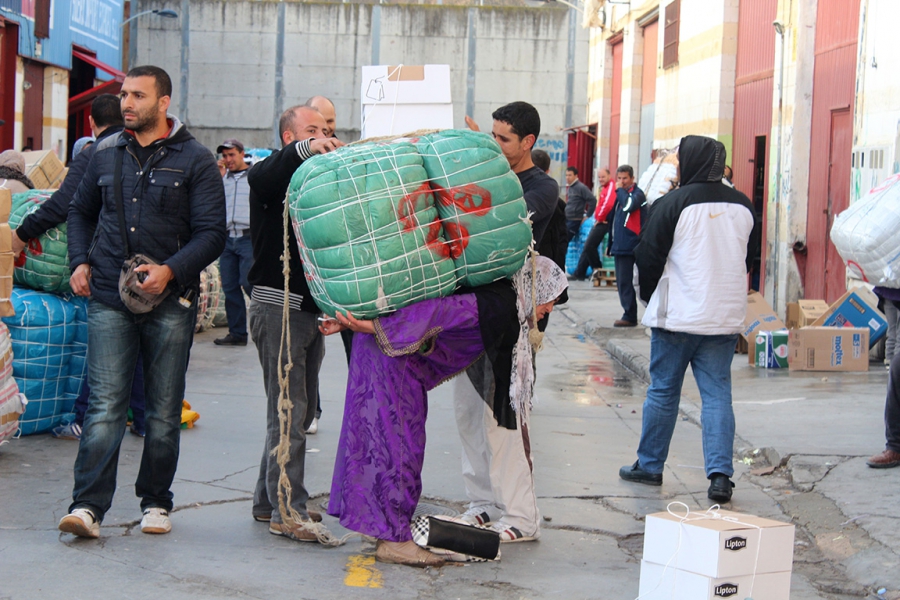 Men who work in the Spanish warehouses strap a bundle onto the back of a porteadora, so she can carry it to markets in Morocco.

Spanish border guards oversee the women’s work. Both parties share at least one concern: holding an orderly line. When commotion breaks out among the women, the guards intervene. Many women, including Al Azzouzi, point to places on their bodies where guards have hit them. 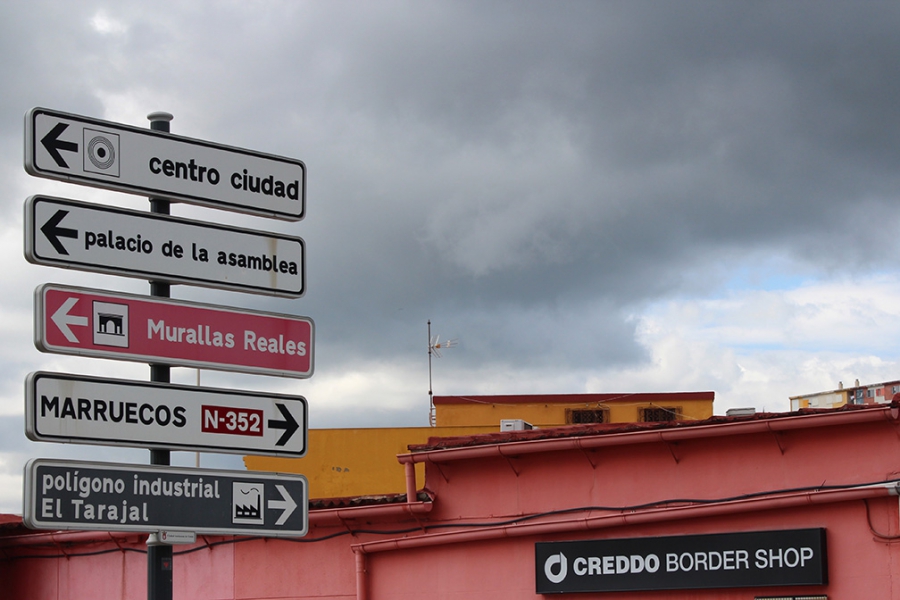 Ceuta is one of two Spanish enclaves on the African continent that share land borders with Morocco.

“It’s humiliating; they are treated like mules,” says Mohamad Chtatou, who researches women and economic development in Morocco’s capital, Rabat. “They are not humans. They are used for their muscles.”

Women who make it to the front of the line strap huge bundles wrapped in plastic, weighing anywhere from 100-200 pounds, across their shoulders. Bent over at their waists, they hobble through a narrow chain-link fence, often carrying additional packages in their arms. It’s a half-mile walk through the border crossing to the Moroccan side.

The Spanish border guards close the gates at some point in the early afternoon, at their discretion. Many women leave having earned no money. Or, as Al Azzouzi puts it, “a morsel of bread.” 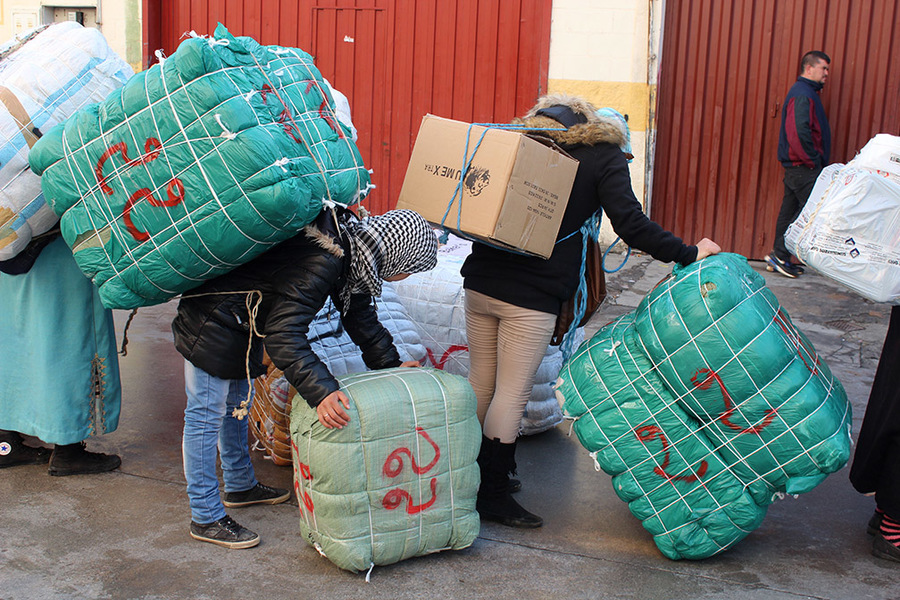 Women wait with their loads to cross the border.

On days when she comes home empty-handed, she says she kisses the walls of her apartment, which she owns. Al Azzouzi lives with her four children, two of them still in primary school, in the seaside town of Mdiq, a half-hour shared cab ride from the border.

Her youngest children have to study at their aunt’s house because Al Azzouzi has not been able to pay her utility bills. They have not had water or electricity in four months.

Aicha Al Azzouzi with her four children in their home in northern Morocco.

She’s considered sleeping outside the gate to ensure that she’ll get work, but her youngest son, Ilias, begs her not to go.

“Sometimes I come back, and I am crying, and I say to them, ‘Tomorrow I will sleep in Ceuta,’” she said. But she’s never done it, in part because of Ilias. “My son cries, and says, ‘No Mama, stay here with me.’”

At 21, Al Azzouzi’s oldest daughter, Salma, says she’s also looking for work. She did well in school, but can’t afford to finish college. 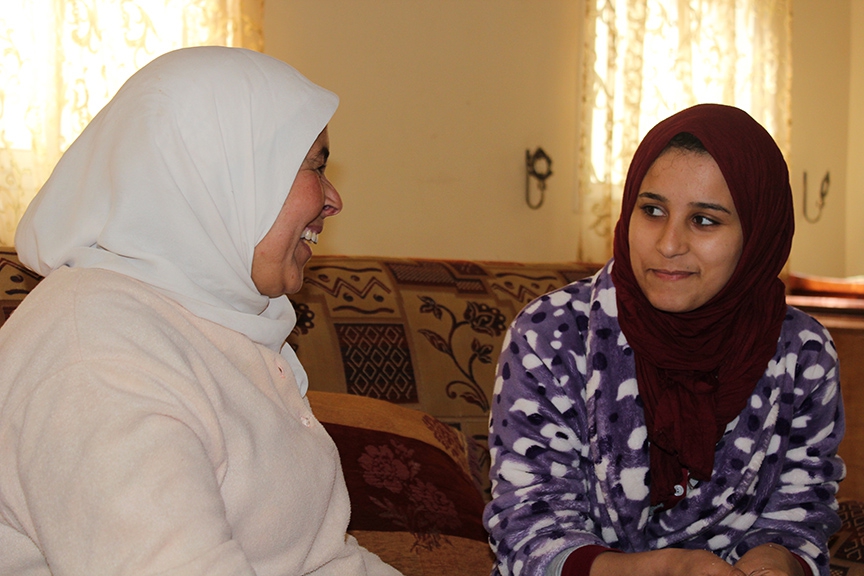 Al Azzouzi hopes her daughter Salma can avoid ever working at the Spanish-Moroccan border.

A technical college nearby allowed her to enroll, for a nominal fee, in a course for operating machinery like forklifts. She’s applied for jobs at the nearby Moroccan port, where such skills are needed, but they told her they don’t hire women.
Search for Common Ground

Salma has been to Ceuta just once, to see where her mother works. She’s determined never to return.

But the next day, Al Azzouzi will return to the border, as she’s been doing for nearly half her life. She has to, she says, to earn a morsel of bread.

Reporting for this article was supported in part by a grant from the global and joint studies program at the Arthur L. Carter Journalism Institute of New York University.