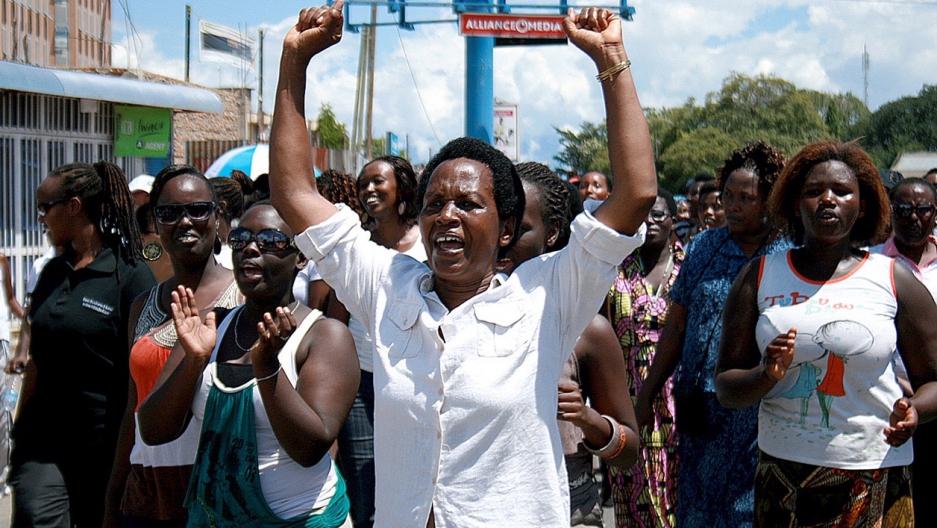 A demonstrator holds up her fists as a group of women demonstrate in Bujumbura, Burundi on May 10, 2015.
Share

Update: Heavy fighting was reported on Thursday May 14 between troops loyal to the government and those attempting to overthrow it.

JOHANNESBURG, South Africa — On the streets of Burundi's capital Wednesday, protesters are wildly celebrating what they see as victory over their president.

A top army general has declared a coup against President Pierre Nkurunziza, who is standing for an unconstitutional third term. In Bujumbura, huge crowds of demonstrators are cheering on the soldiers, though the presidency claims it is still in control.

The whole thing is likely making some other leaders in the region — who are also angling to extend their term limits — a little nervous.

The joy of the protesters in Burundi comes after a year fraught with worsening infringements on their rights.

The strangest among them was a ban on group jogging. Yes, jogging, perhaps the tamest of exercises, and a favorite pastime in Burundi for reasons of both health and socializing. Hundreds of people are said to go running on weekends on the hilly roads in and around Bujumbura, the capital.

According to the BBC, the tradition began during the long years of ethnic conflict in Burundi, when "people would try to vent their fear and frustration and claustrophobia, by running, often in a group."

But Nkurunziza's increasingly authoritarian government saw jogging as a potential threat — a subversive activity. A group of opposition supporters, from the Movement for Solidarity and Development, were sentenced to life in prison for illegal assembly after going for a run together. They were accused by police of using jogging as a cover for an unauthorized demonstration.

On March 8, 2014, the police used tear gas to disperse joggers and people they suspected were linked to the opposition, according to Human Rights Watch. Witnesses told the group that the "police targeted people simply because they were wearing sports clothes."

“Marches or jogging in the streets is prohibited if it is done en masse, but if someone wants to do sports individually, they can do that for sure,” Candide Kazatsa, a mayoral spokeswoman, told AFP at the time.

For the past few weeks the city's streets have been flooded with protesters determined to continue their stand against the president until he agrees to step down at the end of his term.

In Bujumbura, following the attempted coup Wednesday, a young entrepreneur named Auguste told the BBC that he was happy to hear the news.

"What went through my mind today? That finally I was free. Burundians have reclaimed their dignity. We are not slaves," he said.