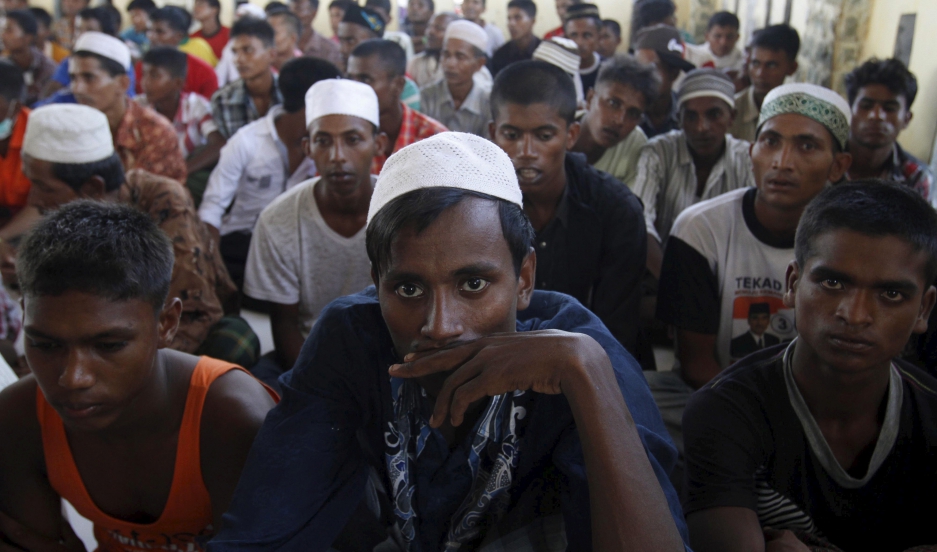 Some of the lucky ones: A group of Rohingya and Bangladeshi migrants admitted into Indonesia in May 2015. Thailand, Malaysia and Indonesia are now pushing away boats holding thousands of migrants.

As a migrant crisis grips the countries around the Mediterranean, a similar problem is unfolding thousands of miles aways in the waters near Southeast Asia.

Thousands of people are currently caught at sea after attempting to reach wealthier nations in the region by boat. The migrants were turned back by the navies of Thailand, Malaysia and Indonesia, prompting some smugglers to abandon their boats and ships with their passengers still on board.

One ship was rescued on Wednesday by the Bangladeshi Coast Guard and brought into the southern Bangladeshi port of Cox’s Bazaar. There were 116 people on board.

“They were in very, very poor condition,” says the BBC's Akbar Hossain. “When I was talking to them, many of them looked half-dead. They couldn’t speak properly. Many of them had got sick. They were so tired because they couldn’t get enough food and water while they were on the boat for the last two months.”

While there were no deaths on this particular ship, the migrants said they had seen bodies floating in the sea, presumably from other boats. The Bangladeshi Coast Guard estimates there are still 3,000 to 4,000 migrants at sea.

The migrants are a mix of poor Bangladeshis looking for economic opportunities and Rohingya refugees from Myanmar, also known as Burma. Rohingyas, who are mostly Muslim, are ethnically and linguistically related to the Bengalis of neighboring Bangladesh and India. There are an estimated 1.3 million Rohingyas in Myanmar, most of whom live in one region in the west of the country, called Arakan.

The Faces of the Desperate

“There’s a disputed narrative about the Rohingya and when they arrived in western Burma,” says Phil Robertson, the deputy director of Human Rights Watch’s Asia Division. “But what is clear is that they’ve been there for generations.”

Yet "the Burmese government claims that the Rohingya are not Burmese citizens,” he says. According to them, "these people are immigrants and therefore they have no rights to be in Burma.”

Rohingyas are not included among the 135 ethnic groups listed in Myanmar’s 1982 Citizenship Law. As a result, they live under a whole set of restrictions on everything from where they can live to whether they can own property, marry, have children or get work.

“More than 150,000 Rohingya have been put into camps where they’re essentially locked down and surrounded by Burmese security forces,” Robertson says. “These people have no livelihoods; they have difficulty accessing health services; their children can’t go to school; they even have difficulty getting adequate food.”