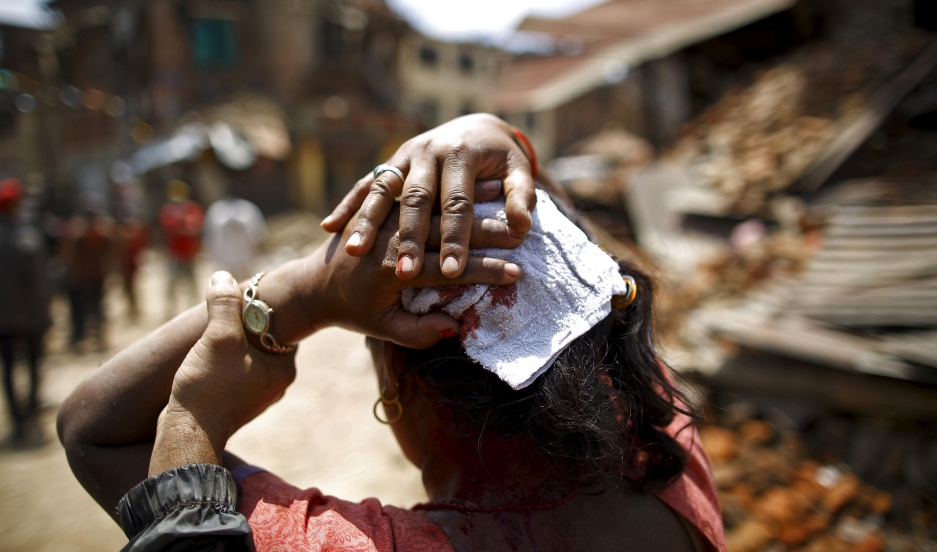 An injured woman walks toward a hospital soon after an earthquake struck Sankhu, Nepal, on May 12, 2015. The 7.3-magnitude quake killed more than two dozen people in Nepal and neighboring states.

Nepal was struck by a 7.3-magnitude earthquake on Tuesday, killing dozens of people  — many of whom were in buildings already damaged in a massive quake last month.

Journalist Donatella Lorch, who lives in Kathmandu, Nepal's capital, says the latest quake was particularly damaging thanks to poor weather over the past few days.

“It’s been raining every night here for the past four or five days, and that has loosened a lot of the earth on these very sheer mountain areas where the earthquake struck," she says. "There are massive cracks in the mountains from the earthquake.”

“What we are broadcasting today, now, are the basic Lifeline tips on whether they should enter the house or not, whether they should spend the night inside the house or outside the house," says Dipika Shresthah, who works for Lifeline, a BBC Nepali Service program that has been continually broadcasting news and advice on how to survive and cope since the first quake on April 25.

"The other big issue is, because they will have to spend the night outside in the open area, we are also giving very basic, simple but practical, tips on how to make sure that they keep their children and female family members protected,” Shresthah says.

That will be difficult: Lorch says many displaced Nepalis were already living outside without tents after the initial earthquake. But Shresthah says the program has already heard from people who have been saved by Lifeline's advice.

One man, she says, called the program today to thank Lifeline for advising him to stay away from his family's house, which had a big crack following the first earthquake.

“The earthquake today made his house completely collapse," Shresthah says. "He was thanking me because he thinks the program helped him and his family stay safe."