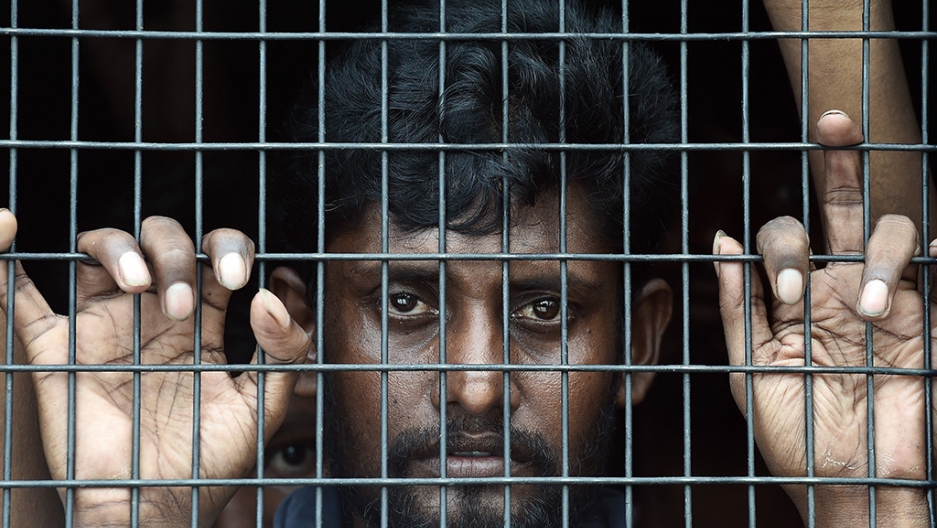 Bangladeshi migrant Jahangir Hussain looks out of a police van at the Police headquarters in Langkawi on May 11, 2015 after landing on Malaysian shores earlier in the day. Nearly 2,000 boat people from Myanmar and Bangladesh have been rescued or swum to shore in Malaysia and Indonesia, authorities said, warning that still more desperate migrants could be in peril at sea.
Credit: MANAN VATSYAYANA
Share

Whenever the world's most persecuted minority makes headlines, it's because their plight has gotten even worse. Thailand recently cracked down on human trafficking, which meant that the Rohingya Muslims, who are persecuted in Buddhist Myanmar and poor and landless in Bangladesh, had nowhere to go.

Staying was not an option, so roughly 500 migrants boarded ships, thinking they were being transported to Malaysia. After smugglers abandoned the vessels, the ships washed up in Aceh, Indonesia, where the migrants have been allowed ashore — though are no better off. They were piled into a sports center doubling as detention center on Sunday, many too weak to do anything but lie head to toe on the floor and try to sleep. Thousands have also been detained in Malaysia, and there are still thousands more stranded at sea, according to authorities.

But the reasons the Rohingya are fleeing Myanmar may also hold true in Indonesia. Praised as a "thriving democracy" and a model for tolerance by Obama, the world's most populous Muslim country is not headed in that direction, according to minorities who live there. Hate speech and violence against minorities have risen steadily over the past decade. Hundreds of churches and mosques have been closed or destroyed by mob violence. Experts say that ultraconservative influence from Saudi Arabia is gradually creating a more rigid, more threatening religious climate across Indonesia.

Meanwhile, in other news, the Houthi rebels in Yemen accepted a ceasefire with their adversary Saudi Arabia, which is set to begin Tuesday. But you wouldn't know it from the level of fighting today. Saudi Arabia has in fact intensified its attacks, in an apparent effort to inflict as much damage as it can before the halt in hostilities. Yemeni rebels said on Monday they shot down a Saudi fighter jet.

Uber isn't exactly a stranger to controversy. The ride-sharing firm has been lambasted for poaching drivers from other companies, for opportunistically jacking up their fares during offensively large snowstorms, and for abducting more than one passenger — not to mention infuriating local taxi drivers in various locales around the world. It's no wonder, really, since Uber's entire business model is based on disrupting existing taxi services.

But old-school cabbies aren't taking it lying down. As GlobalPost's Simeon Tegel reports, Mexico City cab drivers have been howling in protest and have even launched this lawsuit against the app complaining that it’s pirating away customers and violating fare rules. That case is still ongoing. So is another one in Sao Paulo, Brazil, the only Latin American metropolis larger than Mexico City. These battles are part of a growing backlash, from Europe to India, against Uber for allegedly competing unfairly with street cabs.

Americans may be getting ready to tan their skin as summer sets in, but in Asia more people are looking to lighten their complexion. This has been true for a while, of course, and supermarket shelves in Asia reflect that fact. Product lines go far beyond lotions and pills. There are skin-whitening injections. Armpit-whitening deodorants sold at 7-Eleven outlets. A heavily advertised “whitening feminine wash” for a lady's genitals.

So what's the latest craze? GlobalPost's Patrick Winn reports on a chemical goop that you slather all over your arms and legs. Just wait a week and then peel back your skin to reveal the milky white that was hiding underneath all along. It looks about as pleasant as it sounds.