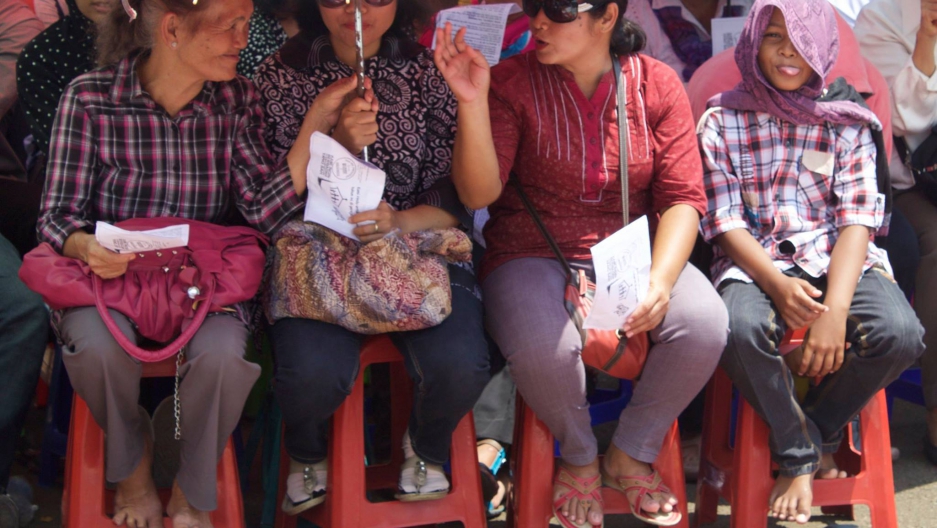 Worshippers from two closed Christian churches, GKI Yasmin and HKBP Filadelfia, gather as part of a worship service as protest in Jakarta, Indonesia in March 2015. They are trying to pressure President Joko Widodo to force local governments to reopen the churches.
Credit: Joshua Adams
Share

JAKARTA, Indonesia — On a recent Sunday in a sun-baked plaza between the country’s national monument and presidential palace, nearly 200 Christians huddled under the shade of many umbrellas to sing and listen to scripture.

They have gathered here upon rows of neon plastic seats every other Sunday for the last two years, appealing to the federal government for help after two Protestant churches were closed by local officials in Muslim-majority communities in the outskirts of Jakarta.

Officials claimed both churches, GKI Yasmin and HKBP Filadelfia, lacked proper permits, though the Indonesian Supreme Court has ruled otherwise. As the dispute drags on, members of these congregations say they will continue to gather right between Monas, the national monument which celebrates Indonesia’s fight for independence, and Merdeka Palace, official residence of President Joko Widodo.

“We are doing more than just getting our church building,” said Bona Sigalingging, a member of GKI Yasmin in Bogor. “This is our attempt to keep Indonesia a country for all. Indonesia is not a country based on any one religion.”

A concept called Pancasila, part of the Indonesian constitution, requires that citizens identify with one of six official religions, listed on their state identification cards. Although more than 85 percent of Indonesians identify as Muslim, Protestantism and Catholicism are two of the nation's approved faiths, helping give Indonesia its reputation as a pluralistic democracy. Even so, many local governments are shutting down churches as politicians crumble under pressure from their Muslim constituents.

“They want to stop the increasing number of churches, and if possible, reduce it,” said Andreas Harsono, Indonesia researcher for Human Rights Watch. “That’s why, in the last 10 years, 1,000 were closed.”

The country was once home to 8,000 churches, according to Harsono.

President Widodo’s new administration, including Minister of Religious Affairs Lukman H. Saifuddin, has hinted that it may take action to improve the rights of Christians and other minority groups, including Muslims who are not part of Indonesia’s majority sect of Sunnism, including Shia and Ahmadiyya Muslims.

"We need to respect each other,” Lukman said, adding that the role of government should be “to maintain the religious harmony."

Lukman has claimed he is drafting a bill that would ensure that Indonesia’s religious minorities can live without harassment in this archipelagic country of 17,000 islands.

“I don't think Mr. Lukman, even the Jokowi administration, will take that brave stand. Not too optimistic,” said Bonar Coki Naispospos of Setara Institute, a religious rights watchdog group.

Others have expressed doubt that new regulations would be able to be implemented at the local level. “A new law that provides more protections is great but if that doesn’t transfer into...enforcing these new measures, it could be a lot of lip service,” said Tina Mufford of the United States Commission on International Religious Freedom.

Christians in Muslim-majority communities continue to face persecution, fueled not only by religious intolerance but also economic and political motives.

"The problem gets bigger because of local politics," said Zainal Abigin Bagir, a religious studies scholar at Gadjah Mada University. “The local government, they don’t want to act boldly on these kinds of issues. They tend to follow the majority’s opinion.”

Hundreds of people showed up for Christmas Mass in 2009 at HKBP Filadelfia church in Bekasi, the most populous suburb bordering Jakarta on the island of Java. But they hadn't come to pray. Instead they chanted, "Burn, burn!" and pelted the modest wooden structure with stones, bruising churchgoers on the holiest day of the Christian calendar. The protesters continued their attacks for the next year, even slinging sewage and manure at Reverend Palti Pajaitan.

"They want Bekasi to be the so-called 'Veranda of Medina,'" said Pajaitan, referring to the Saudi city that is Islam’s second-holiest site after Mecca. "They don't want communities other than Muslims there."

HKBP Filadelfia was established in Bekasi in 2000 by the Batak Christian Protestant Church, known by its Indonesian initials as HKBP. Founded in the late 1800s by German missionaries in the indigenous Batak region of North Sumatra, HKBP is now Indonesia's largest Protestant organization.

When HKBP decided to build a church in Bekasi, it secured the approval of both Christians and non-Christians in the neighborhood. The Indonesian government requires that 60 people of the same faith and 90 people of different faiths provide their signatures whenever a religious group wants to open a facility.

While waiting for the permit to be approved, HKBP started building a temporary wooden structure. But officials denied the permit, and the following year, sealed off the facility for lacking a license.

To Pajaitam, the government was responding to pressure by the local conservative Muslim group that had protested the church, the Bekasi Muslim Community Forum, known as FUI.

HKBP sued the local government and won in the Indonesian Supreme Court. But local officials did not enforce the court’s ruling. The central government has not pushed back for reasons that are unclear, said Bagin, the religion scholar.

As the dispute drags on, the number of congregants attending protests in Jakarta has dwindled. About 300 members joined at first, but now just 50 regularly attend.

"Maybe some are tired," said Pajaitan, wearing a T-shirt bearing the slogan: "God is too big to fit into one religion."

He said that he too has often felt hopeless, especially when the church's efforts to attain legal redress for their grievances have failed. But he said he pushes to keep fighting out of concern for Christians as well as members of other minority groups.

"There will be more victims if it is not resolved," he said.

The GKI Yasmin church in Bogor, a busy suburb of Jakarta, has had its own share of legal battles with the Indonesian courts. GKI, whose initials mean Indonesian Christian Church in English, is a Presbyterian group that formed in the early 1900s in Java. The organization now is affiliated with more than 200 congregations in East, West and Central Java.

When GKI came to Bogor, local residents accused the church of falsifying signatures for its building permit. Then, in 2008, the local government issued a decree freezing the licensing process. The same year, Indonesia's Administrative Court ordered the officials to revoke this decree. The battle made its way to the Supreme Court, with judges ordering Bogor officials to approve the church. As in Bekasi, they have not complied.

Local officials sealed the church in 2010. Still, protests against it intensified between 2011 and 2012, when the congregation met in the street in front of the church, according to Bona. He recalled that a group of up to 100 demonstrators would show up to chant, “You do not belong here, you should go, don't come again!” They also declared in Arabic, “God is great." One time, they surrounded and punched church elders.

Many people in the congregation have given up fighting. While 500 people once turned up for protests, now only 100 members of GKI attend the Sunday demonstrations in Jakarta.

“Many members...are feeling tired, frustrated and afraid,” said Bona. Still, the remaining members continue to fight against what they see as an infringement of their constitutional rights.

Activist Bonar Coki Naispospos of the Setara Institute said he salutes the protesters.

"They are the first churches to openly use the democratic ways to protect their rights," Naispospos said, adding that minority religious groups are often passive. If officials tell them to close their church, they simply move or pay bribes to stay open.

He traces the current spate of religious intolerance to the fall of the dictator Suharto in 1998 and the far more democratic system which emerged. Fearing disorder, Suharto did not allow religious demonstrations during his three-decade governance, in effect allowing minorities to practice freely. These days, the government permits protests without cracking down, said Naispospos.

“Now with the name of democracy, they can exist, they can make demonstration... the control of security forces is not same,” he said.

The activist also said the obstacles facing GKI and HKBP are complex, involving not just religious intolerance but also the political and financial interests of their opponents.

GKI, for example, is located in a new development in Bogor called Yasmin. Yasmin has a residential complex along with shops, offices and a university. It is mostly Muslim. Naispospos said business people may see it as a "strategic" site that they want to keep free of religious conflict in order to sustain a prosperous economy.

Another factor contributing to church closures is the decentralization of government, according to Bagir, the religion expert. Indonesia gave its local officials greater autonomy in 2000 — including the right to run their own elections.

"In the past, local officials were appointed by the central government," said Bagir. "Now they have to fight to get votes...this is where the pressure from certain Muslim groups can be very significant."

Many Muslims who are part of one of the two major Islamic groups in Indonesia — Muhammadiyah and Nahdlatul Ulama, with a combined membership of 60 million‚ say they’re eager to distance themselves from this vocal minority.

“In every religious group, there are segments of hardliners,” said Alpha Amirrachman, executive director of the Centre for Dialogue and Cooperation among Civilisations and a member of Muhammadiyah. “[It’s] not only in [Islam]. We cannot say they are representing the majority.”

Despite the fact that religion is a major part of Indonesia and that he represents a religious organization that participates in many aspects of Indonesian society, he doesn’t believe Indonesia is defined by religion.

“This is not a religious country, this is not a secular country,” said Amirrachman. “This is a Pancasila country. We believe that everyone has the right ... to live here in this country, no matter what your religious belief. [We are all] Indonesian citizens.”

Religious harmony is less of an abstract idea within Indonesia's most diverse areas. In the capital of Jakarta, a global business hub, many Christians enjoy the religious freedom that comes with most cosmopolitan cities.

But she still remembers the discrimination she faced growing up in South Sumatra, where she was one of only a handful of Christian families.

“I was born in one of the Islamic pockets in Indonesia,” said Parapet, who works as an educator. “In my neighborhood, I had a few people [who] mistreated me. I don’t know what they heard about Christianity that made them [have] that attitude.”