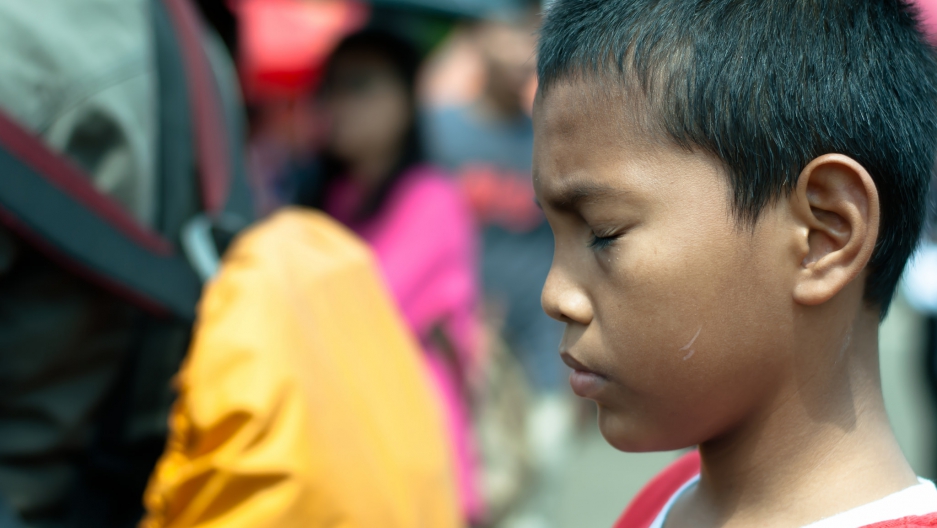 A young boy closes his eyes at a protest in front of President Joko Widodo's home in Jakarta, Indonesia. Christians have demonstrated here twice a month for the past two years in an effort to have their churches reopened after they were closed by local governments.
Credit: Diana Crandall
Share

JAKARTA, Indonesia — When US President Barack Obama met with freshly elected Indonesian President Joko Widodo last November, he praised the world’s most populous Muslim-majority country as “a thriving democracy and a model for the kind of tolerance and pluralism that we want to see all around the world."

But appearances can be deceiving, religious and cultural minorities here say. They warn that hate speech and violence against minority Muslims, Christians and atheists have risen steadily in Indonesia over the past decade, claiming lives and livelihoods as instances of mob violence and government harassment has shut down or destroyed hundreds of churches and mosques.

Experts say that ultraconservative influence from Saudi Arabia is gradually creating a more rigid, more threatening religious climate across Indonesia. Politicians, meanwhile, have taken to catering to a vocal segment of the majority in an effort to get more votes, leaving minorities to fend for themselves.

“The government wants all minority groups to become like the others, like the majority,” said Musa Alkadzim, member of the governing board of the Jakarta-based Universalia Legal Aid Foundation. “It’s actually a religious government, not a democratic government, if that’s the case.”

While a new president has eased some of the pressure created by the old one, Susilo Bambang Yudhoyono, representatives of religious minority groups argue the system remains stacked against them. Local authorities frequently wield vague laws passed by the central government that ban blasphemy and proselytization. They also sometimes use confusing restrictions on building new houses of worship against groups that fall outside the majority. Victims say these encroachments are met with a blend of apathy and hostility toward minority rights.

In Jakarta, a traffic-choked and yet elegantly cosmopolitan city on the island of Java, the day’s first of five calls to prayer rings through the city center just before 5 a.m. Many Muslims here — as around the world — prostrate themselves and pray facing Mecca, Islam’s holiest city located in Saudi Arabia nearly 5,000 miles away. The combination of conservative Saudi influence and poor local and central governance has at times sparked violent reactions in various parts of the country.

In December 2011, for instance, Shia religious leader Tajul Muluk and his community of about 300 villagers were evicted after a mob of 500 people “burned houses, a boarding school and a Shia place of worship” in the Sampang District of East Java, according to an Amnesty International report.

The attack touched off a series of events that included a religious decree (fatwa) issued against Muluk by the non-governmental body Indonesia Ulema Council for “deviant teachings,” Muluk’s arrest by East Java police on blasphemy charges and a two-year prison verdict rendered after at a trial that legal scholars said was riddled with errors.

Universalia represented Muluk in an unsuccessful appeal that reached the Supreme Court and continues to stay in touch with him as he lives quietly following his release.

During the appeal process, Ifdhal Kasim, former chairman of the National Commission on Human Rights, said, “Those who attacked him and his community should be facing legal processes. This country is not a Muslim state. A fatwa cannot be used against him.”

Many hoped the election of President Widodo, known as "Jokowi," would bring economic and political reform after he ran an Obamaesque campaign. But that change has not happened. Widodo beat a former military general named Prabowo Subianto who served under Suharto, a brutal dictator who ruled the country for three decades. Widodo became the first post-Suharto president without direct ties to the man known as “one of the worst mass murders of the 20th century.”

During 32 years in power, Suharto went to great lengths to keep religion out of government and to disempower religious political groups that could challenge his regime. This suppression actually created a sort of level playing field for religious minorities, who were then better able to practice without harassment from the Sunni majority.

But less than 20 years after an economic and political crisis that led to Suharto’s resignation, Indonesia’s young democracy has opened the door for religious zealots to become the tail that wags the dog of society, gaining influence that far exceeds their numbers.

Widodo’s new minister for religious affairs, Lukman H. Saifuddin, has promised to draft legislation that would ostensibly protect religious minorities. That too is subject to skepticism as, six months after his promise, the draft remains to be seen.

Andreas Harsono, a researcher on Indonesia for Human Rights Watch, echoed concerns that Saudi influence — which manifests itself in the form of Islamic schools, charities and housing developments — is making Indonesia less willing or able to embrace those who do not embrace Sunni Islam.

“The Islamic State is not the worst, Pakistan is not the worst,” said Harsono, who has extensively documented violations against religious minorities across the Indonesian archipelago. “Saudi Arabia is the worst.”

Harsono said he receives as many as 1,500 death threats per year for his criticism of ultraconservative religious actors. He said the Obama administration should not treat Indonesia as a positive democratic model in Muslim-majority countries because of Indonesia's poor record on religious minorities.

Just as misguided, Harsono said, is calling Indonesia an example of “moderate Islam.”

“Does anyone say America is a moderate Christian country?” Harsono asked, explaining that he has visited the White House to advise the Obama administration, which has championed the concept of "moderate Islam" as a prescription against extremist groups like the Islamic State. “Islam is a religion. You can bring it to the left, you can bring it to the right. Don’t use that term.”

Meanwhile the Indonesian government, like many around the world, is working to keep the Islamic State from recruiting its citizens. Indonesia has contributed an estimated 500 to 600 people to the jihadist movement in recent months, according to Indonesian army spokesman Brig. Gen. Wuryanto.

While the absolute number of recruits remains fairly small, terrorism experts like Sidney Jones, director of the Institute for Policy Analysis of Conflict (IPAC), believe that domestic extremist groups will eventually develop better training and resources by aligning with the Islamic State.

“The overall capacity of Indonesian extremists remains low, but their commitment to IS could prove deadly,” Jones said.

On a recent Saturday morning at the sprawling and verdant campus of University of Indonesia, associate anthropology professor Irwan Martua Hidayana shared that IS has also created some appeal at the university, which is one of the country's best schools. It accepts less than 5 percent of the approximately 100,000 students who apply each year.

“We know there is some interest among students.” he said. “It’s mushrooming in the public universities.”

He added that he has seen a steady “Arabization” of Muslim students over the past 10 years, which has accompanied a rising Muslim middle class — more young women are wearing the hijab and more religiously conservative political groups have risen on campus, which was a hotbed for anti-Suharto protests that helped compel the dictator to resign in 1998.

“Economically, Indonesia is rising,” Irwan said, noting that political activism has dramatically quieted. “Democratization is getting better. But at the same time we notice the rise of the Wahhabist, fundamentalist influence.”

Just outside Irwan’s classroom on a neatly tiled patio, students of the English Debating Society were vigorously arguing about Sharia law and how the Nigerian government should deal with the Islamic extremist group Boko Haram.

Terry Muthahhari, a slight and bespectacled media studies major, held the floor with eloquent determination as male and female colleagues in jeans and T-shirts periodically stood to interject. The 20-year-old said that he would oppose the implementation of Sharia law in Indonesia.

Stepping aside from the debate for a moment, he explained: “I see civic life as separate from faith.”