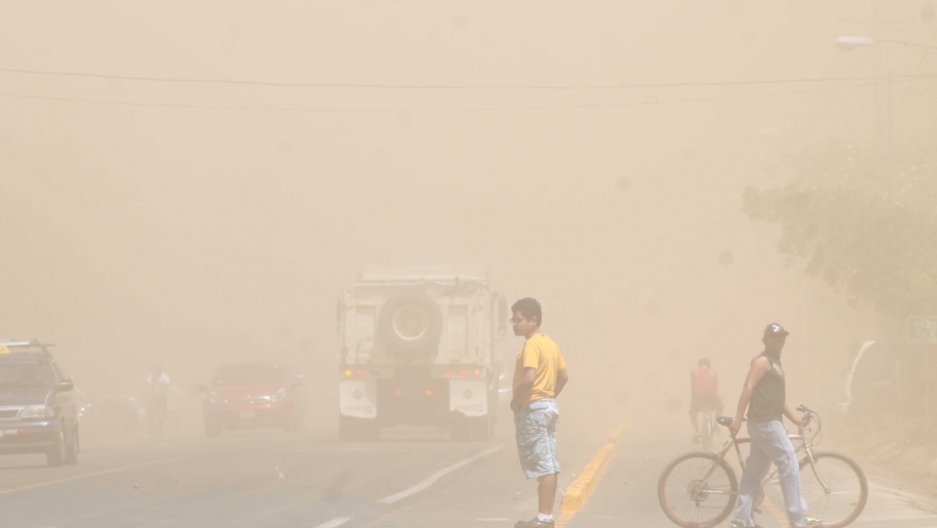 TELICA, Nicaragua — This time of year, the only relief from the dry heat of northwest Nicaragua is an occasional breeze. But recently the winds carried something dangerous: massive clouds of dust that blanketed the town of Telica and the surrounding area.

When the dust storms ended after several days, their effects came into focus. Dust had swept into hundreds of homes. Local hospitals treated children for pneumonia, allergies, and respiratory ailments. Doctors expect to see heavier patient loads in coming months.

Now the dust is also kicking up a legal storm.

In mid-March, more than a hundred people in Leon, this region’s biggest city, filed a lawsuit against several government agencies, accusing them of failing to fulfill their constitutional duty to protect citizens.

Just about everyone in this part of Nicaragua has a story from the mini Dust Bowl. They recall buses nearly crashing even as traffic slowed to a trickle, asthmatic children developing infections, and sandwiches caked in grit. Many wore masks and glasses when they ventured outside, or didn’t go out at all.

Ramon Garcia said no matter how often he and his wife cleaned their jewelry stand in central Leon, dust continually settled on necklaces and seeped beneath the tablecloth. He called it “Nicaraguan snow.” Dust storms are nothing new in Nicaragua. Small ones often occur toward the end of the dry season, in March and April. Their intensity this year, however, was unlike any in memory. Experts say that unless something is done to stop them, they will worsen in coming years.

These storms have deep ecological and economic causes. Peanut and sugarcane farms in the area, many owned by a handful of big businesses, have boomed over the last few decades. Farmers turn up soil during the dry season in anticipation of rain. When heavy winds blow in at the end of the season, they whip the soil, which is contaminated by pesticides and fungicides, into streets, streams, and lungs.

Nicaragua’s problem echoes other recent crises elsewhere in the world. In the past few years, some experts have blamed deforestation for annual dust storms blowing into Beijing from the Gobi Desert, while the Chinese government is attempting to create a “Great Green Wall” of trees in response. And when dust coated parts of western Iran in February, many pointed to environmental degradation in nearby Iraq and Saudi Arabia as a culprit.

In Nicaragua, deforestation compounds the problem. In the 1980s and ’90s, local farmers in search of lumber and firewood cut down groves of trees that were planted as “windbreaker curtains.” This eliminated barriers between farms and nearby communities, leaving the landscape dusty and barren.

An organizer of the group that filed the lawsuit in March, Esthela Calderon, whose house is next to a peanut farm, called recent storms “the last straw.” She said owners of nearby peanut farms have been given permits to plant near residential areas despite the effects. The lawsuit aims to force the government to stop issuing these permits.

“Many people who are tied to institutions that have a lot to do with giving these permits have looked the other way,” Calderon asserted.

Representatives of several agencies named in the lawsuit did not respond to requests for comment. Evidan Olivas, a risk management expert in the mayor’s office, said the national government sent new instructions to local municipalities soon after the latest storms. Telica and other towns are now making detailed maps of local farms, talking with their owners and preparing to plant new windbreaker curtains.

Olivas said the government is not to blame for the intensifying dust storms. “You can’t manipulate the wind,” he argued. “It’s part of nature.”

Some say everybody shares responsibility for the storms. “This is a problem of all institutions,” said Silvio Matus, an epidemiologist in Leon. “We have all contributed, from cutting down the wood to buying it.”

Indiana Coronado, a biologist at the National Autonomous University in Leon, said the government has failed to regulate big businesses with which it has an increasingly cozy relationship.

“Owners of monoculture farms are people with economic power,” she said, adding that the government normally acts “only when there are protests.”

Calderon and other local people who filed the lawsuit favor the planting of new windbreaker curtains, but warn that it would take years for the trees to grow to maturity. In the meantime, their militancy is intensifying.

“All the people have decided that not one tractor more will enter to work that land,” Calderon said. “We’re not going to let them.”

The photos in this story were provided by Nicaragua's La Prensa newspaper, as seen on its website.

Also read: Nicaragua has the region's highest teen pregnancy rate. Many moms are OK with it