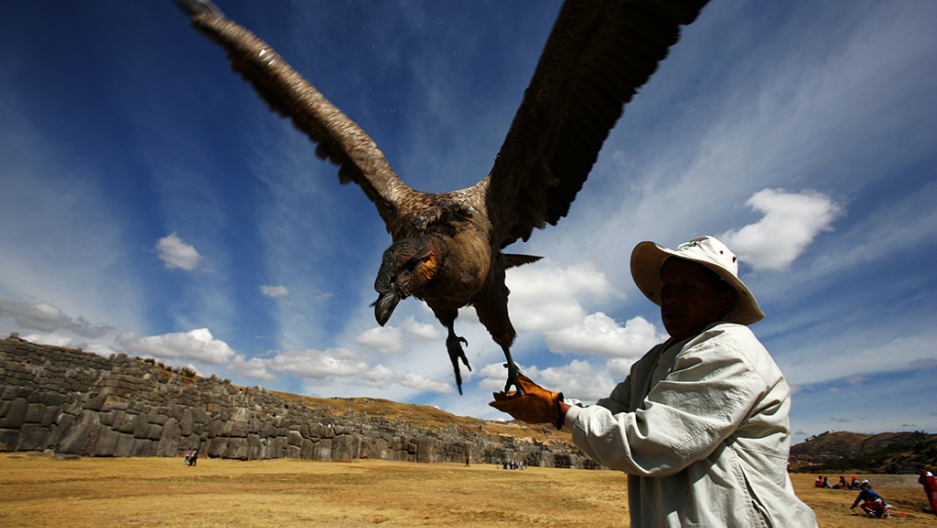 A baby condor is on hand for tourists at Sacsayhuaman, an ancient Inca ground overlooking Cuzco, Peru, on June 23, 2007.
Credit: Brent Stirton
Share

LIMA, Peru — Another day, another endangered species, or so it seems.

The Andean condor could be next. The iconic giant scavenger is a national symbol of Argentina, Bolivia, Chile, Colombia, Ecuador and Peru, but it is disappearing in parts of the region.

According to the Red List of Threatened Species, the conservationists’ bible, there are an estimated 10,000 of the birds left in the wild.

Yet things are not as simple as that.

“The problem is no one really knows,” says Robert Wallace, who heads the Wildlife Conservation Society’s operations in Bolivia.

“It is very hard with animals that cover such large distances and inhabit such inaccessible terrain. The condors you see in one place today and 300 miles away tomorrow could easily be the same animals.”

What is known is that populations in Argentina and Chile, mainly Patagonia, are relatively healthy, while there are thought to be just a handful left in Ecuador and Colombia. Venezuela probably now has no resident condors left.

In Peru, one forthcoming study puts the minimum number at just 250. Meanwhile, Jessica Galvez-Durand, head of sustainable wildlife management for the Peruvian government, says that there are “fewer than 2,500.”

Estimates may vary, but many experts are concerned that the Andean condor is following an alarming world trend: One in eight bird species is threatened with global extinction, especially the large ones.

The reason for this South American condor’s decline is no mystery.

Many farmers deliberately kill the birds, fearing they will pick off calves and sheep. Particularly in Peru and Bolivia, there’s a thriving illegal trade in feathers and bones.

And some birds collide with power lines, while feral dogs compete with condors for the carrion they survive on. Plus, in Peru, there’s been a revival of the Yawar fiesta, a local form of bullfighting in which a condor is strapped to a bull’s back.

Andean countries are trying to crack down on practices that threaten the species. Ronald Daniel Concha Sanchez, a wildlife inspector who works for Galvez-Durand’s agency in Cuzco, Peru, regularly reports merchants in the old Inca capital for selling feathers and other condor parts.

“It’s very hard,” he says. “When you catch one person, then they just get another family member to carry on the trade, or they carry on but taking a little more care to hide what they are doing.”

If the hard work of people like Concha Sanchez doesn’t bear fruit, it could mean the condor is on the way out.

That would leave Bolivia, Chile, Colombia, Ecuador and Peru without an iconic species that has adorned each of those countries’ national coat of arms at one time or another.

A bit like California’s Bear Flag. The last grizzly in the Golden State was actually killed nearly a century ago.